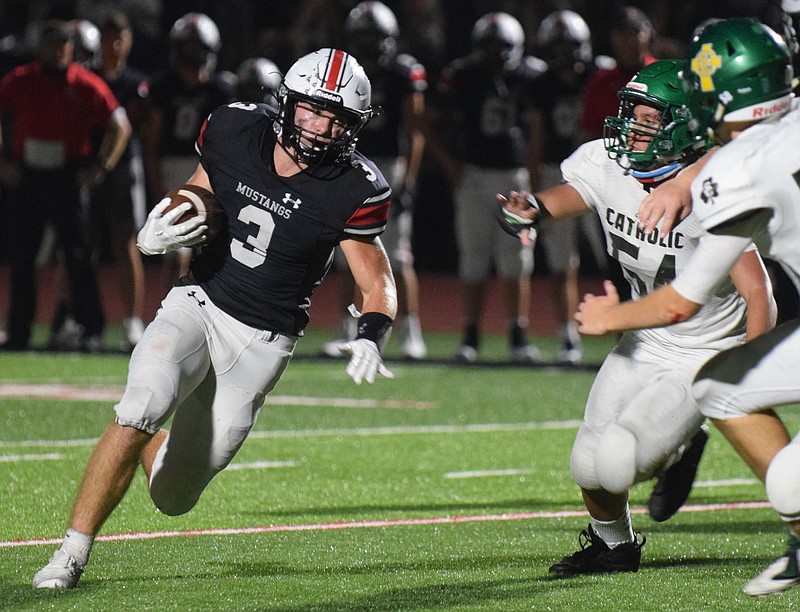 RICK PECK/SPECIAL TO MCDONALD COUNTY PRESS McDonald County's Bailey Lewis runs for a big gain as Springfield Catholic's Blake Southern and Chase Haynes (54) prepare to make a tackle. Lewis finished with 241 yards on 24 carries in the Mustangs' 35-19 win on Sept. 4 at MCHS.

McDonald County also turned around its running game, finishing with 261 yards on the ground, including 241 and two touchdowns by Bailey Lewis.

Cole Martin threw only 10 passes, but three of his five competitions were for touchdowns, two to Trent Alik.

"Tonight was an awesome team win," said coach Kellen Hoover. "We had all three phases of the game that played huge parts in the game. Defense picked up offense at times. Offense answered when the defense wasn't able to hold and special teams had a big play right before the half."

McDonald County received the opening kickoff and failed to pick up a first down before punting the ball away.

Catholic began its opening drive on its own 28-yard line and kept possession for 14 plays before turning the ball over on downs at the McDonald County 31-yard line.

A miscommunication on a pass route by the Mustangs' ensuing possession led to an interception by Catholic's Will Squibb. Squibb, who also played quarterback on offense, took the theft down the sideline, where he dodged a pair of tackles for an apparent touchdown, but the run was called back for a clipping penalty on the return.

Instead, Catholic took over on the McDonald County 40-yard line. Squibb completed a pair of passes to move the ball to the 14-yard line where the Irish faced a fourth and two. After an illegal procedure penalty moved the ball back five yards, Squibb dropped back to pass but took off running when he found no one open. The senior quarterback found a lane down the middle of the field and appeared to be heading for a touchdown when he was hit on the one-yard line and fumbled into the end zone where Alik recovered for a touchback.

The Mustangs then marched 80 yards in six plays for the game's first touchdown. Martin and Alik connected for a 22-yard touchdown pass with 7:59 left in the first half. Jared Mora kicked the first of his five extra points for a 7-0 McDonald County lead. Lewis keyed the drive with runs of 25 and 16 yards.

Catholic answered with a 17-play, 65-yard drive, capped by Squibb's three-yard touchdown pass to Matthew Schmittling and J.D.Bilger's PAT with just 24.4 left in the first half.

McDonald County needed less than 20 of those seconds to break the tie. Alik set up the go-ahead touchdown with a 51-yard kickoff return to give the Mustangs the ball on the Catholic 29-yard line. After a six-yard run by Weston Gordon, Martin found Alik cutting across the middle for a 23-yard touchdown pass with 5.1 seconds left in the half. Mora's kick gave McDonald County a 14-7 lead at intermission.

The Mustang defense forced Catholic to go three and out to open the second half, but McDonald County gave the ball right back on an interception at the Irish 27-yard line.

Squibb completed three passes for 52 yards before Schmittling ran for the final 17 yards to cut the score to 14-13. But Bilger's kick was wide to the left, leaving the Mustangs a one-point lead.

McDonald County then put together three consecutive touchdown drives. Lewis carried five of six plays for 59 yards, including a 15-yard touchdown on the first. Mora's kick with 4:00 left in the third quarter gave McDonald County a 21-13 lead.

After a Catholic punt, Lewis carried on all four plays in McDonald County's 62-yard touchdown drive, capped by Lewis' 11-yard touchdown with less than a minute to go in the third quarter.

Catholic responded with a 56-yard touchdown drive capped by Squibb's one-yard run with 10:53 left in the game. Squibb's pass for the conversion fell incomplete to leave the Mustangs with a 28-19 lead.

Catholic had two more possessions in the game, but Squibb was sacked four times for losses totaling 19 yards before the clock ran out.

"Our defense played really well," Hoover said. "They weren't always in great spots from our offense, giving Catholic good field position. I am really happy with how our defense played. I think they answered after last week. Offensively, it was kind of totally different from last week and that's what I love about the versatility of our offensive group. Sometimes we may need to rely on Cole (Martin) to throw it around a little bit, and tonight we said 'big boys upfront (tackles Danny Grider and Bradley Saylor, guards Kaidan Campbell and Garrett Gricks and center Junior Eliam) we are going to hand it off to Bailey (Lewis) behind you and we need you guys to move them' and they did."

McDonald County evened its record at 1-1 for the season. The Mustangs host Lamar on Sept. 11. Kickoff is at 7 p.m. 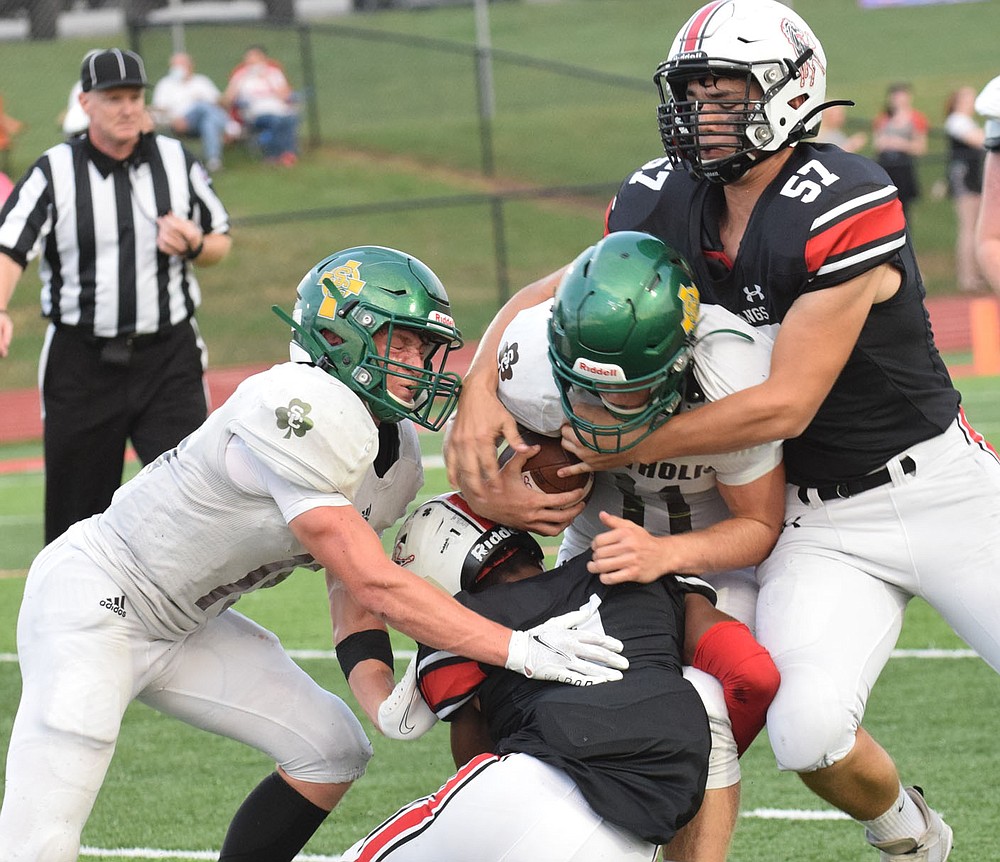