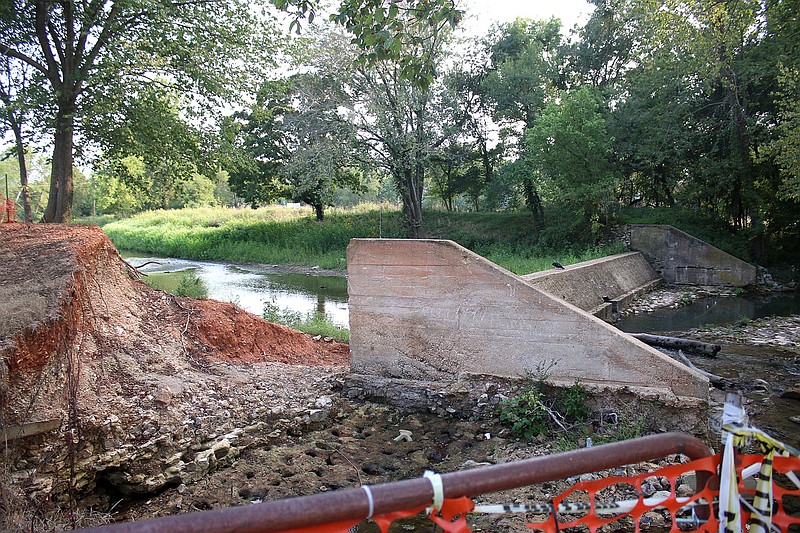 MEGAN DAVIS/MCDONALD COUNTY PRESS The raw power of rushing water eroded an entire creek bank and left the Honey Creek dam defunct. Council members agreed on the construction of 24-foot long, 8-inch thick concrete stem wall connecting to the remaining dam and the installation of a 3-foot by 4-foot tunnel on the north side to allow for a flood gate.

Honey Creek, and the subsequent lake it creates in Southwest City's Blankenship Park, has been at a record-low water level for the better part of the year following devastating spring floods that decimated the dam. After months of discussion regarding materials, measurements and methods of repair, the city council agreed to move forward and request bids on the project during the regular meeting on Tuesday.

Mayor David Blake, who has an extensive background in construction, stands by the proposal of a 24-foot long, 8-inch thick concrete stem wall connecting to the remaining dam and installing a 3-foot by 4-foot tunnel on the north side to allow for a flood gate to control the water level. A steel gate could then be manufactured and installed at a future date. He estimated the cost for materials would be $2,290.

"I'm not for a band-aid," Alderman Joe Carpenter said. "And with your approach, there's a 90% chance it'll work."

Council members were in favor of the proposed increase and asked that Austen draft an ordinance reflecting a rate increase and stating that the sewer rate is calculated on a three-month usage average.

Fire Chief Shane Clark reported that, since the last meeting, the department has responded to three medical calls and three motor vehicle accidents, extinguished one grass fire and assisted one agency with a grass fire, cleared one road blockage and utilized the helicopter landing zone once.

Public Works Director Shane Clark reported the street department has been busy mowing and the water department has been pulling water samples and flushing hydrants. He noted that sludge is scheduled to be hauled from the wastewater treatment plant next week.

City Clerk Krystal Austen said she is in the process of drafting a new yard sale permit ordinance that will remove the limit of three yard sales per year, adjust the fee to $1 per day and enact a deposit to ensure signs and items are removed in a timely manner. Austen is also updating the employee handbook.

In other business, the council:

• Agreed to pursue restitution for close to $1,000 in outstanding water debt;