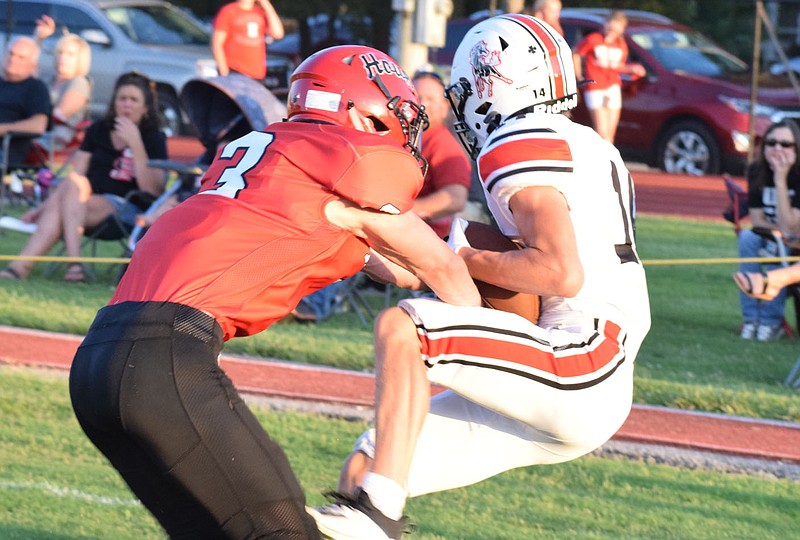 RICK PECK/SPECIAL TO MCDONALD COUNTY PRESS McDonald County wide receiver Jack Parnell holds on to a touchdown pass from Cole Martin after being hit by Aurora's Kohl Rohlman in the end zone during the Mustangs' 50-36 loss on Aug. 28 in Aurora.

A fast start by the McDonald County Mustangs in their 2020 season-opening football game morphed suddenly to a slow finish as the Aurora Houn' Dawgs rallied from a 14-0 deficit to claim a 50-36 win on Aug. 28 at Aurora High School.

An obviously disappointed coach Kellen Hoover said he didn't think the Mustangs mentally let up after the fast start, but that Aurora settled in and played up to their capabilities after falling behind by two touchdowns.

"Aurora is a team that you know is going to be in the game for all four quarters," Hoover said. "They're tough and extremely disciplined."

Junior quarterback Cole Martin and senior wide receiver Trent Alik hooked up for a 45-yard pass and catch on the Mustangs' second play of the game to key the drive. Martin then gained 10 yards on a quarterback keeper before hitting fellow junior, Levi Malone, for a 10-yard touchdown pass with 8:47 left in the first quarter. Junior Jared Mora added the extra point to stake the Mustangs to a 7-0 lead.

Aurora showed signs of what it was capable of doing by running the football on its first possession, gaining 23 yards on three running plays. But the drive was stopped when McDonald County junior defensive back Pierce Harmon intercepted Aurora's first pass of the game to give McDonald County the ball at their own 42-yard line.

Aurora began its comeback on its ensuing possession, marching 65 yards in five plays, capped by Kohl Rohlman's 40-yard touchdown run with 5.6 seconds left in the first quarter. Reserve quarterback Brendan Hall hit Rohlman with a two-point conversion to cut the Mustang lead to 14-8.

After the Mustangs were forced to punt on their next possession, Aurora took just one play to tie the game. Fisher went around the right end on a keeper for a 44-yard touchdown to tie the score at 14-14 with 10:44 left in the first half. Levi Helm blocked Fisher's extra point attempt to keep the score tied.

McDonald County answered almost as quickly, taking two plays to cover 59 yards. After an incompletion, Martin hit Alik with a 59-yard TD pass with 10:25 left in the half. Mora hit his third extra point for a 21-14 Mustang lead.

But Aurora responded with a 59-yard drive of its own, capped by a 39-yard touchdown run by Brody Sims. But Fisher's kick sailed wide, leaving the Mustangs with a 21-20 lead.

After McDonald County was forced to punt for the second time of the game, Aurora marched 56 yards in five plays to take its first lead of the game when Rohlman ran 30 yards for a touchdown with 4:09 left in the half. Fisher ran for the two-point conversion to put the Houn' Dawgs up 28-21.

McDonald County failed to convert after driving to inside the Aurora 10 with over a minute remaining before intermission. Aurora was able to hold the Mustangs out of the end zone despite committing a pass interference and roughing the quarterback penalties.

Aurora stretched its lead on the opening possession of the second half with a 53-yard touchdown drive capped by a 25-yard run by Ian Jackson. Fisher hit Sims with the two-point conversion for a 36-21 lead with 9:57 left in the third quarter.

But Martin hit his second 59-yard touchdown pass of the night on the Mustangs' first play from scrimmage following Aurora's score when he and Malone hooked up for their second TD pass of the game. Mora's PAT made the score 36-28 with 9:37 left in the quarter.

McDonald County was poised to regain control of the game when Harmon intercepted his second pass of the game on Aurora's next possession, giving McDonald County the ball on the Houn' Dawgs' 38-yard line. But after marching inside the 10-yard line, the Mustangs failed to convert on a fourth and three from the eight-yard line.

Aurora never let the bad field position bother it, driving 93 yards in five plays when Sims got loose for a 75-yard touchdown run with 2:50 left in the third. Jackson ran the two-point conversion to give Aurora a 44-28 lead.

The teams traded turnovers and the Mustangs were forced to punt before Aurora sealed its win with a 51-yard touchdown drive capped by Sims' four-yard touchdown with 5:27 left in the game for a 50-28 lead.

McDonald County was able to close to 50-36 when Bailey Lewis keyed an 80-yard touchdown drive with a 57-yard run. Martin and Malone connected for a one-yard touchdown with 2:17 for their third TD of the game. Martin hit Jackson Clarkson with the two-point conversion to cut the lead to two possessions, but after an Aurora fumble, Martin's desperation pass was intercepted and the Houn' Dawgs were able to run out the clock.

"Aurora plays option football so any busted assignment is going to be evident in the results of the play," Hoover said. "We just didn't get our assignments done enough. Offensively, we left some points out there. We got into the red zone a couple of times and were not able to punch it in. That showed in the final score. We needed to score both of those times and we would have been right there. We just didn't execute enough to win the game on both sides of the ball."

McDonald County will host Springfield Catholic on Sept. 4 in its home opener. Game time is 7 p.m. 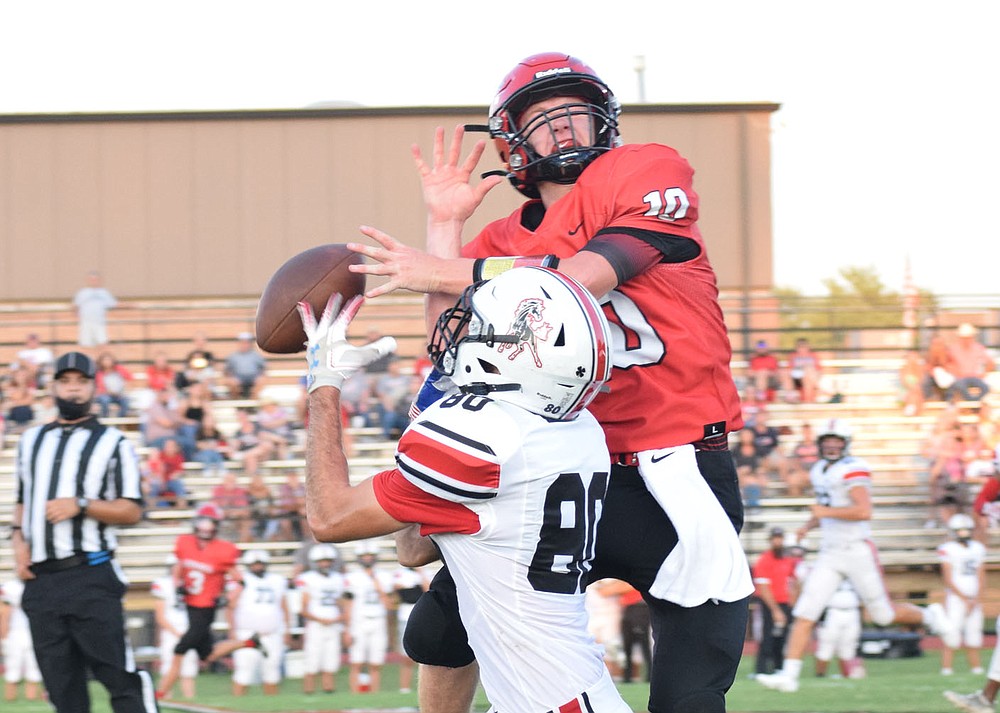