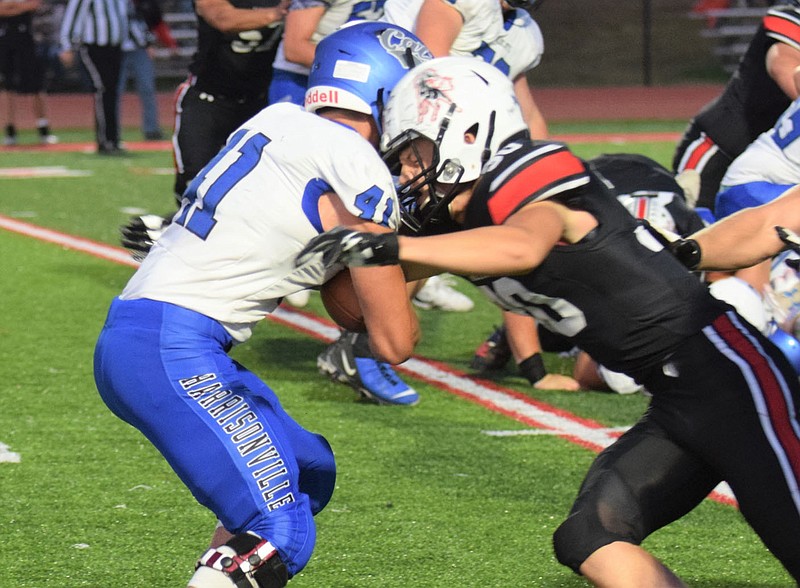 The Harrisonville Wildcats used the 2020 version of Ohio State 1960 three yards and a cloud of dust.

The game was the second consecutive for McDonald County against an opponent that was not originally on the schedule. The Mustangs' scheduled game at East Newton was canceled due to several Patriot players being unavailable due to quarantine from the covid-19 policy.

Reynolds, a 5-8, 175-pound mass of muscle, carried most of the load for Harrisonville, gaining 229 yards on 36 carries, including two touchdowns. As a team, the Wildcats rushed for 276 yards on 52 carries while gaining just 50 yards on 5 of 11 passing.

"We knew they wanted to run the football after we saw their statistics and watched some film," said coach Kellen Hoover. "The kid they wanted to get the ball (Reynolds) had 230 yards. It's a case of we knew they were going to come in and do just exactly that. We had some good stands, but we didn't keep their offense off the field enough to give us enough of a chance. A lot of what we gave up defensively is due to our lack of offense."

The Harrisonville defense was just as strong, literally and figuratively, holding the Mustangs to 113 total yards, led by Bailey Lewis' 98 yards on 19 carries. McDonald County gained just 36 yards through the air, as Cole Martin was limited to 6 completions in 12 attempts. Martin was also sacked three times for a minus 17 yards.

"We made too many mistakes (including two interceptions and a lost fumble) and did not execute very well," Hoover said. "We just did not play well enough offensively to help our defense and give us a chance to win the game. They are very physical and very aggressive on defense and we did not handle that very well. They have some good linebackers (led by inside linebackers Carson Miller and Trevor Campbell), but we didn't execute the little things tonight and that shows up in a big way."

McDonald County received the opening kickoff but gave the ball to Harrisonville on a fumble on the Mustangs' first play from scrimmage.

The Mustang defense was able to get the ball back when Levi Helm pressured quarterback River Riley to hurry a throw that was intercepted by Martin on the Mustang 15-yard line.

But three plays later, Harrisonville returned the favor of a Martin pass to give the Wildcats' the ball back on the 15-yard line.

It took Harrisonville just three plays to score, capped by Reynolds' two-yard run. Miller ran the conversion to give the Wildcats an 8-0 lead with 6:37 left in the first quarter.

McDonald County answered with its best drive of the night. The Mustangs marched 60 yards in 12 plays with Martin hitting Levi Malone with a 10-yard touchdown pass to cap off the drive. Nine Tu added the PAT to cut the margin to 8-7 with 33.3 seconds left in the quarter.

Harrisonville then put together a 13-play, 56-yard drive that took nearly half of the second quarter. Riley scored the touchdown on a two-yard run with 6:17 left in the first half. The senior quarterback also ran the conversion to give Harrisonville a 16-7 lead.

McDonald County had a chance to cut the lead before half when Pierce Harmon intercepted a Riley pass to give McDonald County the ball on the Harrisonville 33-yard line.

But after Lewis carried five straight plays to give McDonald County a fourth and one at the 12, the Harrisonville defense stopped Weston Gordon for no gain to end the Mustang threat.

The teams traded punts to start the second half before Reynolds got free for a 66-yard run on Harrisonsville's second possession of the half to give the Wildcats a first down at the McDonald County 10-yard line. Joshua Pesek ran for nine yards, setting up Reynolds' one-yard touchdown. Riley's conversion pass was intercepted to leave Harrisonville with a 22-7 lead with 6:34 left in the third quarter.

After the teams traded punts again, McDonald County's defense stopped Reynolds for no gain on fourth and one to give McDonald County the ball on their own 47-yard line. But the Wildcats' second interception of the night set up Harrisonville's final score.

On the first play after taking over at midfield, Reynolds got loose for his second long run of the game, this one covering 44 yards to set up his own two-yard touchdown run. A conversion kick failed, making the score 28-7 with 8:22 left in the game.

McDonald County took just two plays, both runs by Lewis, to answer on its ensuing possession. After gaining seven yards on first down, Lewis took a pitch from Martin on an option play and raced untouched 41 yards for the touchdown. Tu's second PAT of the night cut the score to 28-14 with 7:27 left.

The Wildcats, led by six carries by Reynolds, were able to run out the clock in a 13-play drive to seal the win.

The loss drops the Mustangs to 4-2 for the season, 2-0 in the Big 8 West Division, heading into Friday night's game at Reeds Spring in a non-division conference matchup. 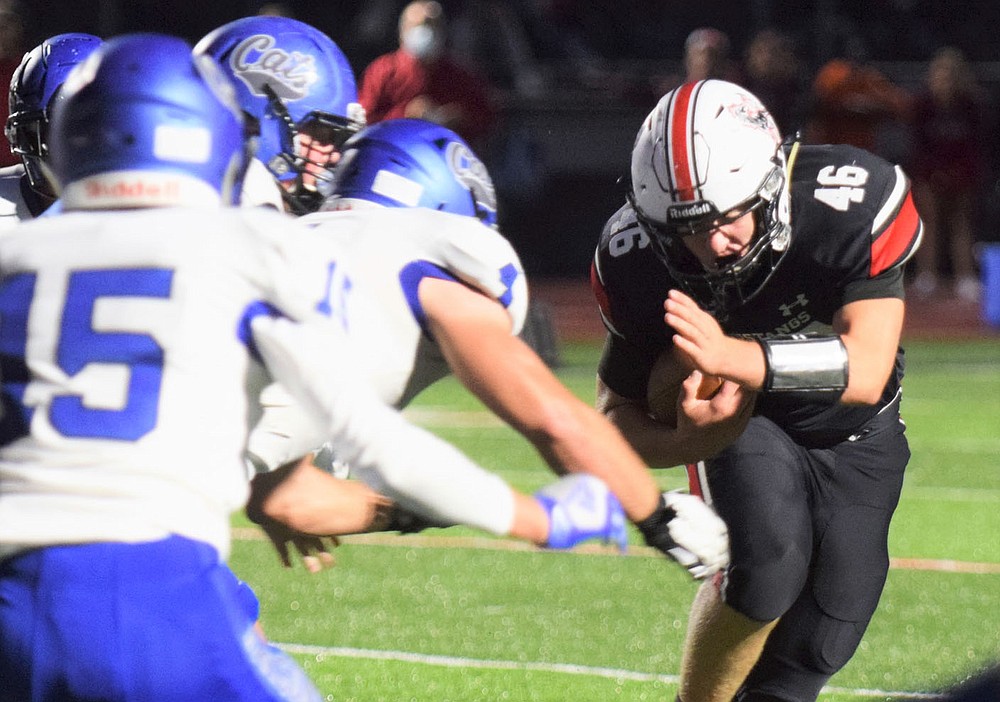 RICK PECK/SPECIAL TO MCDONALD COUNTY PRESS McDonald County running back Weston Gordon looks for running room during the Harrisonville Wildcats 28-14 win over the Mustangs on Oct. 2 at MCHS.