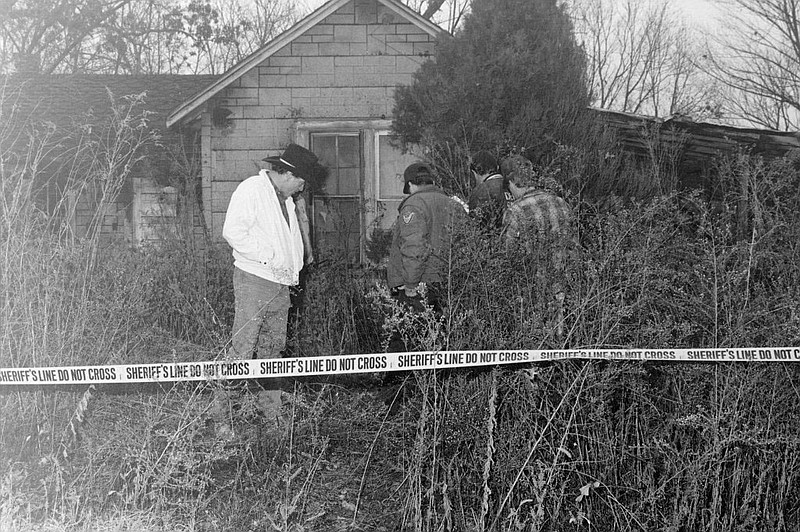 Courtesy photo Local officials investigate the skeletal remains of a young female, found by hikers along a remote country road, three miles north of Pineville, according to reports in the Dec. 5, 1990 McDonald County News Gazette. McDonald County Sheriff Lou Keeling, in the white jacket, oversaw the investigation of the unidentified woman and her unknown killer. The 30-year-old cold case is now getting a renewed review, as a Texas-based firm hopes extensive DNA testing could crack the case.

Local and national investigators are hoping that people passionate about cracking open a 30-year-old case in McDonald County will do their part.

A Texas-based lab, Othram, is now taking on the case and hopes to secure funding for its work. The move means new light might be shed on an old case. In some 20-to 30-year cold cases, investigators "have exhausted sometimes tens of thousands of dollars," Olivia Ytterberg, Othram social impact manager, said.

Sometimes, those officials feel they have unearthed every option they have. This gives investigators a leg up.

"We want to solve every case we can," Ytterberg said.

The story of "Grace" Doe is complicated.

"Grace" Doe's body was discovered on Dec. 2, 1990, near an abandoned farmhouse on Oscar Talley Road, between Lanagan and Pineville, according to reports. A couple collecting cans discovered her remains. Her killer utilized six different types of cord and clothesline for bondage, Ytterberg said. The six different types of cord included military cord that was not available to the public in 1990, reports said.

Investigators believe Doe was raped before being strangled.

Some reports say that people recall hearing a woman scream and the loud sounds of a truck engine about a week before Halloween that year.

Records indicate that Doe's dental work "was not normal for that time frame in that area," Ytterberg added. That's why some believe Doe could be a resident of the four-state area, rather than the local area.

Approximately two months before the body's remains were discovered, a local 10-year-old boy tried to tell his parents about a body he saw. His parents, however, thought he had an overactive imagination and his comments were dismissed. Had they come forward at that time, it could have had a different outcome, Ytterberg said.

The age-old mystery has perplexed local authorities, who have worked tirelessly for three decades to connect the dots and bring the killer to justice.

Doe was dubbed "Grace," thanks to a former investigator, who said the case would be solved "by the grace of God."

As Othram staffers launch into the case, officials say people can contribute in a variety of ways: monetarily; by sharing the case online; and/or uploading DNA to be stored in the lab to help cases.

Othram's price tag for analyzing DNA in the Grace Doe case is $5,000.

The lab is the only one in the nation that conducts the entire process in-house. Lab personnel use DNA enrichment, modern genome sequencing and genealogy. Sometimes, only trace amounts of degraded or contaminated materials are available for analysis.

People who contribute their DNA help build a broader bank of matches. That can help narrow down the victim or the assailant, Ytterberg said.

Part of the process entails building a family tree. The more information available helps provide that connection, Ytterberg said. People are able to submit their DNA and upload that information, through a site such as DNASolve.com.

Groups of people throughout the country are personally motivated to help solve cases. Through websites such as WebSleuths.com, people follow cases on true crime discussion forums.

Othram, based in The Woodlands, has helped solve various cases around the country. Some cases, due to their "popularity" and the facts known, have a following of people who want the case solved. For instance, a case involving a hiker found in Florida was funded in one week, Ytterberg said.

Another case in Texas also was funded in a week, but the local police department contributed to the funds, she added.

Another case -- involving a young man found on the beach in Galveston -- has not garnered a lot of interest because there aren't a lot of details yet, Ytterberg said.

Othram utilizes "proprietary techniques" as well as a genealogy process to solve some cold cases that once seemed impossible to crack.

A body found in the state of Washington was submerged underwater for five to six years. "He was found in 1994 and the last contact he had with his family was around 1987," Ytterberg said.

Lab officials, however, were able to achieve success.

Ytterberg admits that sometimes DNA can be too degraded to crack the case. However, officials work hard -- sometimes, performing more than one "enrichment process" -- to make inroads, she said.

The analysis process differs per case. Because evidence's degradation and contamination vary, each case is "very different in terms of turnaround time," Ytterberg said.

A link to DNA

Othram officials reached out to Hall, seeing the case on a website, and inquired about helping.

Additional submissions of DNA and monetary donations will boost the cause, he said.

A DNA test on the books at the University of North Texas Center for Human Identification, which has been there for some time, is compared against missing or deceased people's DNA, he said. The forensic unit offers screening and DNA testing for criminal investigations.

Having additional DNA with which to compare, could help shed light on the victim's identify, Hall said. If a relative or cousin has matching DNA, that could help identify Grace, Hall said.

DNA has been compared to missing people from California to the East Coast, Hall said. This method, though, adds a broader base of comparison and could help identify Grace's family member, he said.

"To just identify her would be great," Hall said. "It would be immensely important, and great to get her back to her family."

The McDonald County Sheriff's Office will aid Othram by sharing information on social media about the crowdfunding campaign and ongoing investigation, he added.

The 30-year-old disturbing and callous cold case is challenging. Numerous people have worked for years, trying to bring it to finality.

Ytterberg said people providing DNA, monetary donations -- and any information -- could shed some light on this poor victim's identity and a potential killer.

"I would love to see this case solved," she said.

For more information, or to make a donation, visit https://dnasolves.com/articles/grace_doe/ or DNASolves.com.

That trend has become stronger over the past decade, as more and more people have followed tracks gone cold. Various websites exist where people share information, leads and conjecture.

The current global health pandemic, however, has created a gap in which people have more time on their hands. People working — or not working — from their homes are utilizing those extra hours to serve as their own sleuths.

“People are really interested and these cases really resonate with them. They want to do what they can,” Ytterberg said.

“People are very passionate about these cases and want to help solve them.”

Home-based sleuths seek out websites and online true crime discussion forums to research and follow cold cases throughout the years. Now, with extra time on their hands, more people have become interested in seeing what they can dig up, Ytterberg said.

“People are interested in giving them their name back.”