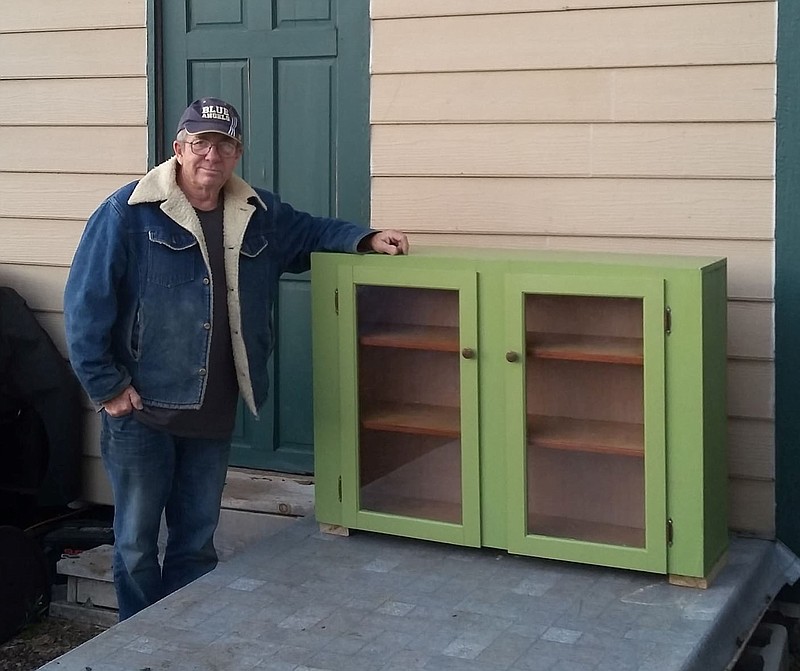 SALLY CARROLL/SPECIAL TO MCDONALD COUNTY PRESS Gary Henretty shows off the renovated cabinet that he turned into a new "Blessing Box" for Noel. He and his wife, Diana, hope the Blessing Box, just placed at Noel City Hall, will help those down on their luck or in need of a few items. The effort is a community-wide one. The Henretty's stress that anyone can donate goods for the box, and anyone in need can take some goods for free.

The man reached into a blessing box in Grove, Okla., discovered boxed soup packages, and his face lit up. When Diana Henretty saw his expression, she couldn't help but be touched.

"It was like Christmas morning," Henretty said. "I thought, we need one of those for Noel."

She and her husband Gary feel the area needs such a blessing box, a stationary stand with a glass enclosure that allows people to drop off -- and pick up -- dry goods, blankets and more as a "blessing."

It's built on a trust system and kept open and available all the time. The idea is that anyone can donate much-needed items. Anyone who is in need can access the blessing box for free.

The effort is a community-wide one, with input and supplies from anyone interested, she stressed.

The Henrettys have been inspired to help others for quite some time. They say they asked about building one several years ago, but talks didn't go very far.

This time, the couple asked alderwoman Faye Davis, who brought the idea to the city council. The Noel City Council approved the addition last week during a council meeting.

Since then, the Henrettys have set to work. Gary is remodeling and re-purposing a former cupboard that their church pantry no longer needed.

After seeing photos online, the Henrettys think they can transform the hand-off into a hand-up tool.

"It's a beautiful cupboard," Diana says, "We just want to get it going. We're excited to have that blessing box."

The box was finished and placed earlier this week at Noel City Hall, under the roof and safe from the weather.

The Henrettys believe there are several people in Noel who are homeless, or down on their luck, who will benefit from such a box. Some appear to live under a nearby bridge. They also hope to help people with families, who might be struggling financially through the pandemic.

Still, Diana says, there might be people passing through Noel who might need something on the way to their next stop.

"We are looking for items that are instant and healthy," she said, adding that those who may take advantage of the goods may not have a stove on which to cook.

She's also worried about cans of nonperishable items freezing, but said those details will be worked out in time.

"We really believe it will be good for Noel, especially in the winter months," she said. "We don't care who gets it, as long as it can bless other people."