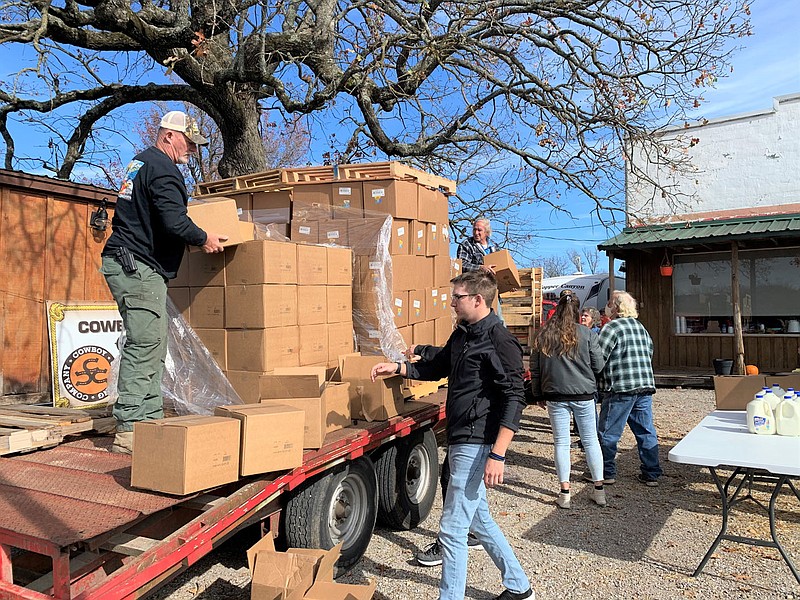 SALLY CARROLL/SPECIAL TO MCDONALD COUNTY PRESS David Jensen, left, gets ready to hand a box to Elijah LeBlanc, as Delbert Roe (back on trailer) works to unload more food items at a local Farmers to Families food box event at Sims Corner Church.

Delbert Roe believes more and more people are finding out how to get badly needed groceries for free.

Roe speaks from experience. He's helped at several USDA Farmers to Families food box events. On this day, Roe unloaded a trailer, giving the boxes to fellow volunteers, who then handed off the precious cargo to others in need of fresh, free food.

Ralph Hobbie has taken advantage of several food distribution efforts at Sims. He always makes it a point to grab a box for his son, who has a new baby.

On Friday morning, Hobbie even volunteered to carry a box and a gallon of milk for a young mom with two little ones. He actually was there to get his own box but saw the young lady carrying a baby and holding the hand of a toddler, and thought she might need help with her food.

As he carried the box and a gallon of Hiland milk to her car, he said he believes the local effort -- one of several across McDonald County -- is a huge blessing for many people.

The boxes, full of different foods each time, have helped him "get creative" on meal creation. "I eat things I normally wouldn't," he said. "The vegetables are always fresh."

Hobbie often tries to get additional boxes to take to others. Today, he figured he wouldn't be able to get multiple boxes. "I'll probably give mine to someone else," he said.

The USDA-funded project focuses on distributing food to people in need of groceries and includes items that would normally go to waste, Sims Corner organizer Monty Muehlebach said.

"In Carthage, they were dumping literally thousands of gallons of milk after the schools were closed," he said. "It's hard to believe in a country like ours, people do go hungry."

Through the Farmers to Families national distribution and logistical networks, extra food is now funneled to local neighbors.

Food is gathered from hotels, restaurants and other foodservice businesses that have been impacted during the health pandemic, the USDA website says.

The USDA's Agricultural Marketing Service is authorized to purchase up to $4.5 billion in fresh produce, dairy and meat products from American producers of all sizes, according to its website.

The effort is overseen by an all-volunteer group. Frank Wood services the Southwest City area; Muehlebach services the Sims Corner area; Jack Smith covers the Anderson area and Mark Bartley covers the Longview Mill area. An additional contact picks up for the Splitlog area as well.

Pickups and distribution vary. At Sims Corner, the distribution generally occurs every Friday morning at 11:30 a.m. It's a weekly event many see as critical for their well-being.

For Grace Hoffman, the box of food delivered each Friday is a real help on the grocery bill.

Hoffman, aided by Hobbie, had her hands full with two little ones, four-year-old Rosie and one and a half-year-old Lilly. With a baby on her hip and another one in tow, Hoffman said the effort is "very helpful" for her and other people she knows. Usually, Hoffman tries to secure boxes for her husband's boss, some coworkers and a lady from church.

Before distribution began, Muehlebach stood atop the trailer full of boxes. He apologized to the group, saying that the extra two pallets of food that volunteers anticipated were not available at pickup in Neosho. Volunteers, of course, have no control over the quantity that is distributed to them. Each organizer and group of volunteers find out their allotment upon pickup.

"It is what it is," he told the crowd that was gathered, asking everyone to take what they needed and make sure their neighbors could, too.

Many McDonald County neighbors lined up to take a box and a gallon of milk, as volunteers quickly unloaded the trailer and placed those items on a table.

Word is quickly spreading of the effort. Muehlebach said he had a text that morning from someone in Aurora, asking about the food box distribution.

For Sky Blakeley, the 11:30 a.m. hand-up every Friday allows her to take much-needed boxes of groceries to her elderly neighbors, many of whom are home-bound.

If available, she tries to pick up 15 boxes each time to distribute to her neighbors and elderly friends in the Jane and Bella Vista, Ark., areas.

She goes house to house, delivering the food. One family, in particular, has a member on dialysis, she said. When she is able to secure 15 boxes, she generally doesn't get done with her delivery until three that afternoon.

James Epling, in line with many others, said he heard about the effort from his brother. The food distribution is beneficial, especially for an older crowd of neighbors.

"It sure helps a lot of people," he said. 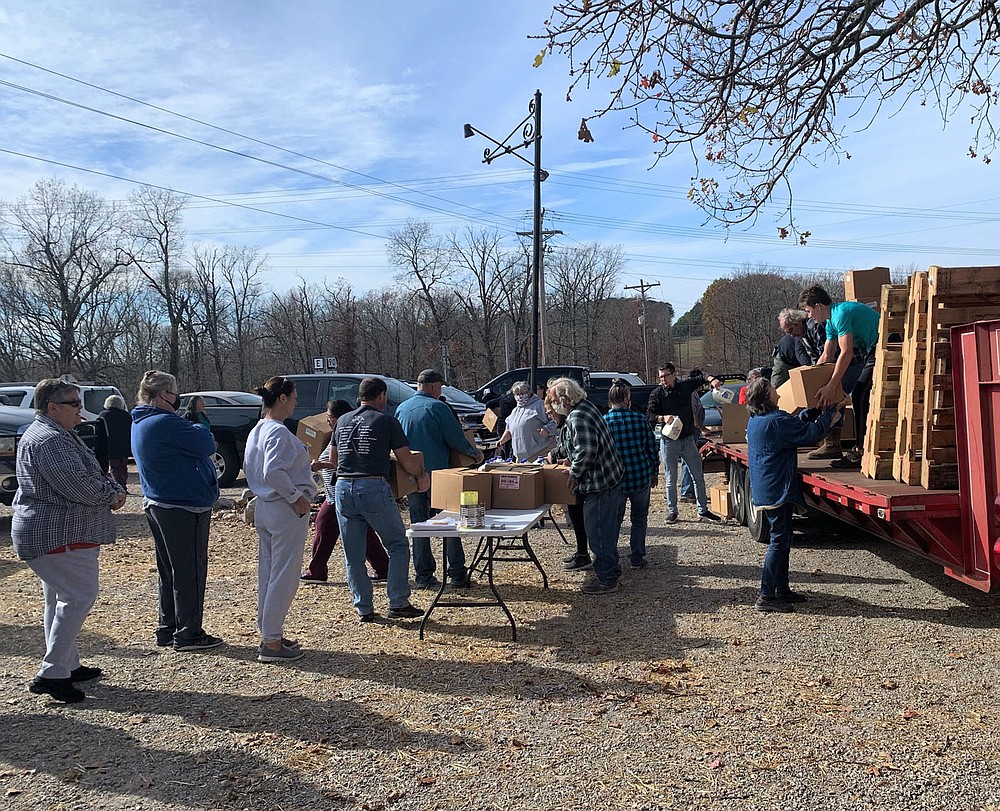 SALLY CARROLL/SPECIAL TO MCDONALD COUNTY PRESS Volunteers work quickly as McDonald County neighbors line up for a free box of food and a gallon of milk on Friday morning at Sims Corner. The Farmers to Families food box project has several points of distribution in the county. The project is part of a national effort to help utilize food that would be normally go to waste during the pandemic, due to closed schools, restaurants and businesses.