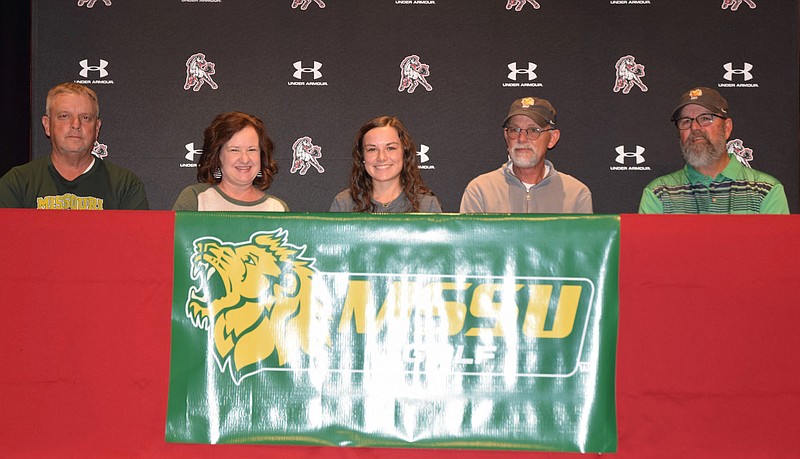 Lily Allman's history-breaking career at McDonald County High School recently took another step when she became the first female golfer from MCHS to sign a scholarship to play collegiate golf.

Allman signed on Nov. 11 to continue her golf career at Missouri Southern State University in Joplin.

"I am really excited to sign with Missouri Southern," Allman said. "I am just happy to have the decision over with and not have to worry about that anymore. Columbia College and Southern were my top two choices. Southern recruited me really hard and made me feel like I was really wanted there. Throughout my senior season, they came to a lot of my tournaments. All the girls on the team texted me before state to wish me luck. A couple of girls came and watched, along with the coaching staff. They also offered me a free ride and that was very crucial on the money side."

She is a three-time all-conference and all-district selection, a two-time district champion, a 2019 sectional champion and a three-time state qualifier that included a third-place finish this past season.

Southern coach Mike Wheeler said he is glad Allman picked Missouri Southern over the other schools that were recruiting her.

"Lily Allman is a very good fit for MSSU and our golf program," Wheeler said. "Academically, we have an excellent College of Education for her to continue her studies. She is a great student and will have no problem adjusting to the college curriculum.

"Athletically, she is a true competitor. I had the opportunity to watch her play several times this spring. There is no quit in her. She will definitely make us better, and Coach Skaggs (Assistant Coach Derek Skaggs) and I will strive to help her grow her game. We are in the third year of our women's program and have made great strides toward being a competitive force in the MIAA Conference and the Central Region of Division II athletics. The addition of Lily for the fall of 2021 moves us forward in our quest. We are truly blessed and excited to be chosen by her to become a Lion."

Allman said she is so blessed to have the opportunity to play in college and that it is something she has always wanted to do since she started playing the game in the eighth grade.

As Wheeler noted, Allman plans to major in education.

"I don't know what level of teaching I want to do, but I want to be a high school golf coach," Allman said. "I think it will be secondary education (high school) with being a coach."

For the past two seasons, Allman was coached at MCHS by Darryl Harbaugh.

"This is one of the things Lily has worked so hard for these last four years," Harbaugh said. "This is what she wants. She wanted to go play in college and she earned this opportunity. She is going to be a great student. She is going into education which will be wonderful for anyone who hires her. As a person, I don't know how high the bar is, but she sets it. I have said it before and I'll say it again, 'she is the best thing coming out (of) this school as far as everything she does.' She is our leader. She is the one who came up with the idea of raising money for kids with cancer. I didn't come up with this. The team came up with this on their own. She is the kind of kid as a coach, and I have coached all sports, who you beg to be around. These are the ones you will do anything in the world for. Southern is getting a great kid. I don't think they realize what they got, but they will."

Allman said she wouldn't be where she is at without lots of help.

"I want to thank my family, Coach Harbaugh, Coach Fields (Kyle Fields) and Coach Short (Blake) and my teammates," Allman said. "All three of my high school coaches have been very influential. My parents have taken me all over to play golf. They have been at every tournament I have been in. Maybe there were only a couple of tournaments where both weren't there, but at least one has been at every tournament. I can't thank them enough. My Uncle Kirk (Allman) is my swing coach and has helped me so much. My teammates have also been great. They have been so very supportive. I am just blessed and thank God for the opportunity."