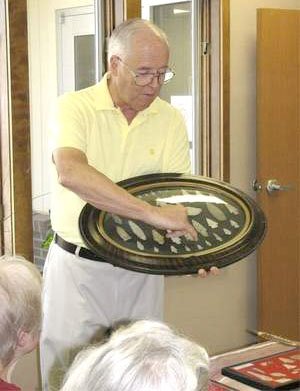 Lyle Sparkman uncovered his love for history when his grandfather dug up some arrowheads in the Ozarks field he was plowing.

The four-year-old found the artifacts fascinating, leading to a lifelong love of unearthing intriguing history facts for others.

The educator and native Ozarkian finds much richness in history. His goal? Helping others see the deep connection we have in the past.

He's driven to offer an accurate look that's there for the uncovering.

"I like for people to show their interest and get them fired up," he said. "I want people to know what it's like to be an American, to know about our Ozarks culture. I feel we're deeper as a nation (with our history) than we think we are."

His vast knowledge of all this history has been front and center in a number of presentations over the years.

The seventh-generation Ozarkian is a well-educated educator. His lengthy resume documents his various degrees and spans the gamut on career highlights as an assistant superintendent at East Newton R-VI, a third-grade teacher at Southwest R-5 Schools in Washburn and adjunct college professor for several universities in Springfield.

And that's just the tip of the iceberg.

His well-documented vita shows a myriad of work, presentations, school projects and volunteer projects. In all the work, his deep historical interest is woven throughout.

Sparkman's knowledgeable reputation leads to many invitations to speak to groups.

In March, Sparkman spoke to the McDonald County Back to Basics group in Anderson.

His presentation was extremely interesting, Robin Killion, Back to Basics leader said.

"Lyle is a good presenter," Killion said. "His wealth of knowledge about his subject makes his talks interesting and informative. Plus, his side stories are amusing," she said.

His circuit of presentations has garnered much fame -- not fortune -- for spreading the word in the sake of goodwill.

"The presentations are entirely word of mouth," he said. "I have no social media. I do not advertise. Maybe it's the fact that people are starved for information."

Sparkman enjoys working with various audiences. He relies on his educational background to bring home information while engaging with his audience.

"I enjoy working with the audience," he said. "The presentation becomes interactive."

The speaker also targets his talks and specifically develops each presentation for a particular audience.

"I've never given the same presentation twice," he said.

He doesn't shortchange his message.

People in Europe have a deep sense of history. Americans don't, he said.

As a result, Sparkman has always upped his game to provide accurate, historical facts that others can absorb.

"Every time I've had the opportunity to make something richer, I would do so."

It's always been that way for him.

From the time he was four, some unearthed arrowheads sparked some interest. From there, he pursued what he wanted to uncover. His curiosity led him to research on his own. Being a good reader and knowing how to utilize resources soon led to greater efforts.

He joined the Missouri Archaeological Society when he was just 11.

By the time he was in junior high, Sparkman took his in-school history assignments to another level.

"I just killed it," he said, laughing.

The young man did not consider being an archaeologist. Instead, he served in the military and turned his career hopes to education.

Over the years, he's invested in his archaeological interest, spending hundreds of hours studying the subject as a hobby.

He's used his educational posts as platforms, helping others realize the deep roots of history. His membership with the organization spans at least 30 years, which does not include his time serving in the military or working in Arkansas.

The highlight, Sparkman said, was participating in the Big Eddy, an archeological dig in Cedar County.

When the Stockton hydroelectric dam was built in the 1970s, the Sac River began to erode the bank. Local collectors noticed that artifacts were beginning to wash out from a 14,000-year preservation.

In 1997, the Kansas City District U.S. Army Corps of Engineers realized that water releases from the Stockton dam could potentially destroy the site below the dam, which had remained untouched for 14,000 years.

A significant dig was organized.

Sparkman learned a great deal during his time there. One of the most significant, he said, is the value of having a well-stratified site (oldest on the bottom and newest artifacts near the surface) of a "multi-cultural site for the sake of dating occupation."

Other information came to light: "That even during the first post-ice age epoch, there was significant contact with a far-off culture that traveled to southwest Missouri to associate with the locals."

Here in the Ozarks

Sparkman's March 13 presentation of "Before the Pioneers" focused on the Ice Age through the influencing tribe remaining in the Ozarks (starting in 1675 and ending in 1825) and the historical foundation that can be found here.

Anderson resident Peggy Wooden, who was instrumental in having Sparkman speak, said he was a go-getter back in school.

The two attended junior high and high school together in Springfield. Wooden recalls that Sparkman's "avid interest" in things would move ahead in warp speed.

"He would take it to the end," she said. "If he became interested in something, he would give it his all."

That go-for-it attitude was evident in a presentation she saw about a year and a half ago.

She happened to see a flyer that her former schoolmate was speaking at the National Fish Hatchery in Neosho. She hadn't seen him for about 50 years. Her interest was piqued. After the presentation, the two had a nice visit.

Several months later, during a Back to Basics planning meeting, Wooden suggested Sparkman, knowing he would give an interesting talk.

In a wide-ranging area, Sparkman has lifted information from his own research to give enlightening presentations to a variety of organizations. History buffs, those who seek Ozarks pioneer information and adults who are genuinely interested in history reach out to him for a gig.

Like his time spent in education, Sparkman wants the information presented to be factual.

He has found that Native American information, in particular, has been "less than accurate."

Over his career, Sparkman merged history and education by obtaining federal grants for teaching American history.

He reached out to others in a variety of ways by leading gifted education programs and challenging others during Odyssey of the Mind competitions.

Many tasks were accomplished at once when Sparkman took on various presentations, tasks, projects and educational work.

An example: writing for educational publications centering on the Ozarks' past and archaeology efforts in addition to dressing as a historical figure during a presentation.

Wherever he was, he always drove home the critical points.

As a third-grade teacher, he focused on having his students learn about methods used by their grandparents. He wove interesting tidbits into the storyline.

"I would teach them how to tie a knot like an Osage Indian would."

He also focused on pioneer ways of accomplishing tasks.

"I wanted my students to take pride in being from the Ozarks."

These days, on whatever platform it is, the historian wants all Ozarkians to know the importance of their roots.

"I believe we have to understand that our area has a regional history and deep traditions that should be remembered in our schools and newspapers," he said.

"We have earned the right to consider our Ozarks heritage special and to preserve it for future generations."