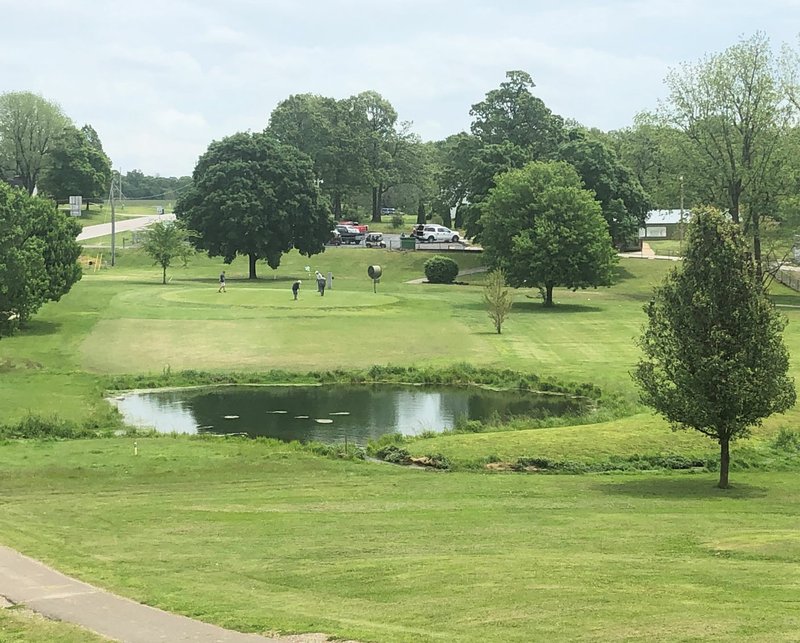 RICK PECK/SPECIAL TO MCDONALD COUNTY PRESS The par 3 ninth hole is the signature hole at the Mount Vernon Golf Course. The medium-length hole (150 yards) is downhill over water with a green slopped from back to front.

There is an old saying that the game of golf is nothing more than a good walk spoiled.

I like to walk. I try to walk at least 4-5 miles every day. But even though I enjoy walking more than most, I tend to think a good walk is a missed opportunity to play golf.

When I play golf, I use a golf cart. When I take a walk, I don't take my golf clubs. I see the two pastimes as equal opportunity hobbies.

One thing I do enjoy about playing golf that is common to walking is trying new courses, or trails in walking.

Though I haven't played much golf outside the four-state area, this year I have had the opportunity to play two courses new to me.

The first was in Las Vegas in early January before it became just another ghost town in the old west.

We played at Las Vegas National. Physically it is just a few blocks off the strip, but aesthetically it's miles away. Lush with trees and green grass, you would hardly know you could hit Caesar's Palace with a wayward drive.

The thing I most remember about the course almost five months later is the history surrounding it. There are markers on almost every hole noting something of interest -- Doris Day lived here; Sonny Liston lived there; and with a typical Las Vegas flare, Sante and Kenny Kimes (mother and son serial killers) lived in a house just off the fairway on one hole.

The course was also where Tiger Woods won his first professional tournament, shooting a 71 at Las Vegas National on the fifth day of the 90-hole tournament that featured several different courses.

It was during one of these tournaments that pro Craig Stadler supposedly made a 13 on a hole. While our group was waiting to hit our approach shots to a par 5, a course marshal told us the story of Stadler making a 13 on the hole. He said the course owner put up a plaque on a tree on the hole noting Stadler's futility.

He said years later the owner was in the hospital about to die when Stadler came to town, went to the course for the plaque and took it to the hospital with him to pay his final respects. He said Stadler wanted the owner to put the plate in his casket and take it to the grave with him.

The maintenance man said the tree died years ago and it was cut down and the plaque was thrown away. This, like most golf stories, proves that fiction is better than the truth.

The clubhouse at Las Vegas National was also a hangout for some of the "Rat Pack." They would go there after their show to have a few drinks and hit balls on the lighted driving range. It seems that they had the idea for TopGolf years before it became a national fad.

My second new course of the year was last week in Mount Vernon.

No stars used to live along the course at Mount Vernon, but that might be because they would have to cut down some trees to make room for a house.

Despite not being a long course (5,600 yards), hitting a good drive is a must. Every hole is tree-lined with trouble on both sides of the fairway. If you miss the fairway, there is a good chance you are going to be behind a tree for your second shot.

Even so, the course's main defense is the greens. They are small and most are slightly elevated and all are shaped like an overturned saucer your grandma uses for tea.

With small greens that run off on all sides, chipping and pitching is rough, especially since the saucer-shaped greens are all sloped like the saucer was leaning at a 30-degree angle on the side of the teapot.

After being short-sided for almost every hole on the first nine that led to a 45, a second nine of 41 kept me in the mid-80s.

Maybe the best thing about the day was that by using the Four States Golf membership card that covered the greens fee it only cost $10 for cart rental for the 18 holes.