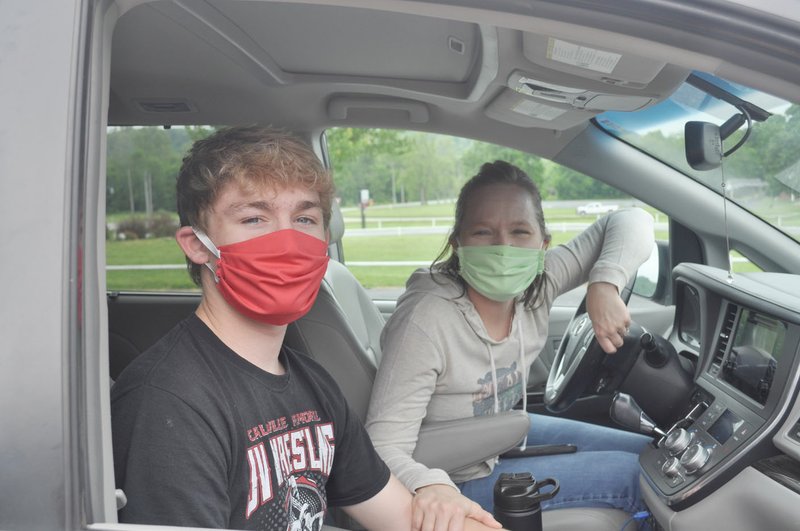 RACHEL DICKERSON/MCDONALD COUNTY PRESS Oscar Ortiz (left) and mother Monica Ortiz are pictured in the car line at senior checkout on May 13. Seniors were able to check on their grades, return computers and pick up their personal items and their caps and gowns.

McDonald County High School seniors lined up in vehicles in the school driveway on May 13 to do their final checkout.

Due to health concerns because of the covid-19 outbreak, students were not allowed in the building to retrieve their belongings or complete other business. Rather, everything was taken care of by teachers wearing masks set up at several tables along the driveway.

"Because this is a different year, we have a checkout form to make sure we have everything ready," Principal Julie Holloway said, "how they want their name on their diploma, checking computers back in, making sure they have their classes completed."

A few seniors weighed in about what they will be doing after graduation, which is scheduled for July 10.

Oscar Ortiz, who has made a name for himself in wrestling as state champion, was in the car line with his mother, Monica Ortiz. He said he plans to attend the University of the Ozarks, where he will wrestle and major in business. Wrestling is the school's main sport.

He said, regarding school being canceled, that he was ready for a break when spring break rolled around, but then he was "kind of bummed" when he found out they would not be coming back.

"I'm going to miss everyone here. I love this school and I'll always be a part of this community," he said.

Kristen Cornell of Anderson said she has played softball all four years of high school. She was in concert choir for two years, Dynamic Divas for one year and Rhapsody and Rhythm for one year. She plans on attending Allen County Community College for her first two years, focusing on education. When she earns her teaching degree, she hopes to come back to McDonald County High School to teach, she said.

As for school being closed, she said, "It's kind of annoying. We left for spring break and never came back."

Sara Lutman of Longview has been very much into art during her high school career.

She said, "I was a bit disappointed when this pandemic showed up. I made it a goal to work harder than years before. I was let down when the art shows were canceled."

She said she had worked very hard on a painting of a lion, and now she does not get to display it at the art shows.

"This was going to be my best year," she said.

She noted she branched out to creative writing and won two third-place awards in The Joplin Globe and The Crowder Quill.

"It was fun trying new stuff this year, like writing, because I never knew I had that talent," she said.

She plans to attend Crowder College. She said she wants to get a career she loves and help animals and be a scientist.

"I always did love nature and animals and plants," she said. "My whole life, the forest has brought me peace."

She said she feels for people who live in big cities who are locked down and cannot go into the forest to get peace from nature to lift their spirits.