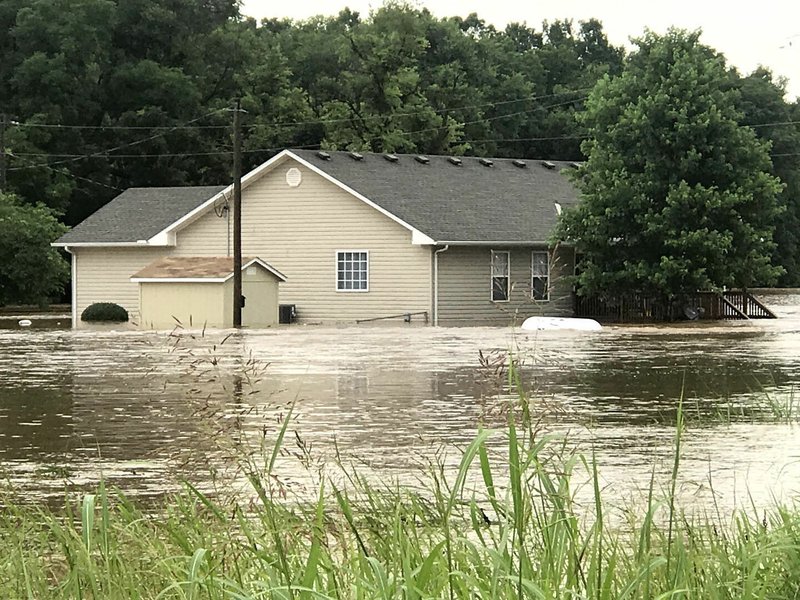 Fast, high-rising water, rain and a little bit of lightning is the real-life scenario for local agencies on this Friday.

A crew composed of several agencies trained for such emergency instances on Friday, near the Cowskin Bridge on the Elk River, Gregg Sweeten, McDonald County Emergency Management director, said.

Missouri State Highway Patrol troopers, assigned to the Water Division, scheduled the training about a month and a half ago, he said. Covid-19 concerns delayed their efforts for a while, but agencies got the go-ahead two weeks ago.

It was happenstance that thunderstorms, high-rising water, and lightning set the stage Friday for the training.

"It really did make it more real-life," Sweeten said. "We try to make it realistic as possible, but it wasn't dangerous. The water being up was a bonus."

"That was the first time we've collaborated efforts (to that level) and had that many people participate," Sweeten said.

Two types of boats are utilized: a jet boat, which is a more shallow-water boat, and easier to maneuver; and a propeller boat, known for its ease for high-flood water usage.

Local agencies trained for victim rescue, as well as boat maneuvering. Cones were set up to give a realistic environment. Participants were challenged to cross the river in the boat, touch the cone and cross again. Boundaries were established and participants were instructed not to cross a certain line while conducting the maneuver.

Fast-rising and powerful river water can determine the outcomes of emergency scenarios. Such training for McDonald County scenarios is critical, Sweeten said.

Just two weeks ago, crews rescued a total of 11 people in two days: eight on one day and three people the next, he said.

Rescue crews are called on day or night to help, he said.

In a recent challenge, the current pushed a canoe into trees. The canoe took on water and flipped, and the girl in the canoe escaped but clung to a small branch. Her friends -- 60 feet away on the shore -- attempted to throw a small rope to her but couldn't reach her, Sweeten said.

Such instances can be common, especially during the spring, when rains make creeks and water rivers rise quickly.

"We have treebanks, piles of tree brush, and the wrong current can push you on over into that," Sweeten said.

"It's a lot harder than you make it look, Sheriff," the guys told him.

Expert boat maneuvering is challenging, he says. Even experienced personnel can have rescues that can turn on a dime.

Two years ago, Anderson experienced a major flood, the first of two serious events. Hall was involved in a hazardous rescue. The current was so powerful, it broke a piece off the boat. The people being rescued held on to a rope that was attached to the boat.

Having other people's lives in your hand is hard.

"That day, that even scared me to a point," Hall said. "It was a little bit more than I was used to."

Personnel who are now experienced in working a boat in such conditions benefit the county.

Hall estimates at least six to eight staff members, just from the McDonald County Sheriff's Office, are now comfortable with maneuvering a boat.

The training on Friday also provided experience in throwing a boat rope bag. Troopers with the Water Division explained that victims in the water will be tired and will not want to swim to a rope. The rope should be thrown, keeping in mind the flow of the current, and have the rope float to the victim, Hall explained.

"We actually had people in the water and we threw them the rope," Hall said. "We thought, 'Did we get a good angle on it?'"

Friday's rainy atmosphere provided a realistic backdrop for the training. Hall said constantly observing conditions is important. The river changed drastically while they were training, he said.

"The river went up by a couple of inches," he said. "There was a gravel bar there and we couldn't even see it by the end of the training."

The hands-on experience offered all agencies critical training, he said.

Unfortunately, local agencies see water rescues quite frequently during this time of year.

"The river conditions can change in a matter of hours."