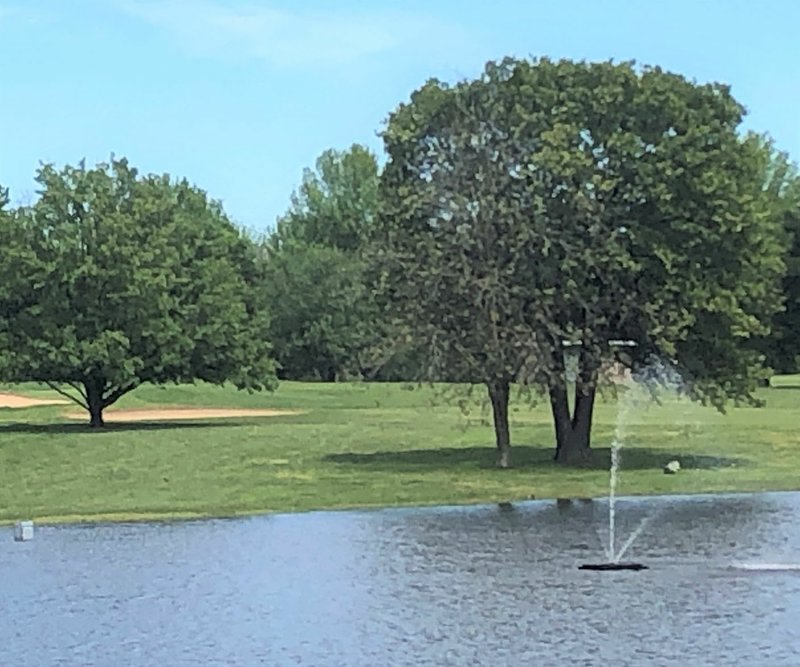 RICK PECK/SPECIAL TO MCDONALD COUNTY PRESS Number 16 at the Cassville Golf Club requires a drive over a lake, but if you go straight at the green several trees may be in our way for your approach.

Golf sometimes is called a hobby and sometimes is labeled a bad habit. With my game, both of those apply, depending on the day.

I don't remember the first time I played, but I know it was at Monett on sand greens.

I really never "played" but got to hit balls when I would tag along with my older cousins and brother. A lifelong McDonald County resident, we played in Monett because my mom's sister lived there and that was the place of many family gatherings.

For those non-golfers and those golfers considerably younger than me, sand greens are just that. Instead of grass, the entire "green" is like a kid's sandbox. Once you landed in the sand, there was a rake-like tool that you would use to make a flat surface to the hole.

With the way I putt at times, maybe I need sand greens to make a comeback.

I really didn't start playing much until after high school. Even then it wasn't much more than an afterthought when looking for something to do -- not a lot, if any, highlights from those days except the memories of a cousin (RIP Keith) hitting a car that was parked it in its garage at Bella Vista or me hitting a driver off the old number four tee box at Noel and hitting the back of a seat on a cart (with someone sitting in that very seat) that was parked almost straight right come to mind much more than any others.

I played regularly for several years after I got out of college, but then went a stretch of 20 years without playing at all.

Once I started playing again, the equipment had made a dramatic change. Instead of persimmon woods, everyone was using metal "woods." That difference, along with the new balls, has made golf almost a different game.

Even with the new equipment, age has negated any advantage of today's equipment.

But that might actually be a good thing. I'm much straighter now than back in my younger days -- mainly because I can't hit far enough to get in much trouble.

My best friend and I used to play against his son and his best friend. We would beat them every time. My friend's son said that was because us old men would "just walk it down the fairway," while they would hit it long and far -- far left and far right.

They kind of explained their losses to less experience and senior tees, but when we passed a tennis court to the side of one fairway and I told them that we should play tennis sometime because we would beat them at that too, the fight was on.

Since I semi-retired over five years ago, I have played much more golf. That same friend's son said my regular foursome catches the OATS bus to go play now.

I am not a member of any course, but that allows me to play a lot of the public courses in the four-state area.

Over the course of the rest of the summer, I will provide my thoughts on these courses.

My first review is the Cassville Golf Club in Cassville.

The one thing about Cassville is that the fairways are not Bermuda or zoysia like many area courses so that in the early spring you don't have all the tight lies as you do on those courses where the grass does not come in until late May at least.

On the front nine, most holes require your tee shot to be placed properly or you will have tree trouble with your second. The back nine has water in play on four out of the nine holes.

My favorite hole on the front is Number 9. The hole has a sharp dogleg to the left, but if you try to cut the corner a number of trees down the left side come into play.

If you go to the right, the chances of reaching the green with your second are slim because you will be a long way from home. The hole measures 344 yards from the senior tee, but you had better hit it straight or making par will be tough.

On the back, Number 11 is a short (115 yards from the regular tees) par 3, but water guards both sides of the green. A narrow strip of dry land between the water and green slopes toward the water on both sides, so you had better hit the green or you're in the water.

My favorite hole, though, is Number 16. The short par 4 (318 yards from the senior tees) requires a drive over water. The hole doglegs to the left. You can go directly at the green but numerous trees may be in your way for your second.

The greens were somewhat slow last week, but a lot of the greens have a variety of slopes and "buried elephants," making putting a little difficult. The greens can be mowed low enough to make some hole placements diabolical.

I should have said Number 18 was my favorite because I made my only birdie of the day on the 436-yard par 5. After struggling a little on the front, I managed to shoot 41 on the back for an 84.

Hoping for better results this week. Where is TBA, but it will be better than working no matter where we play.