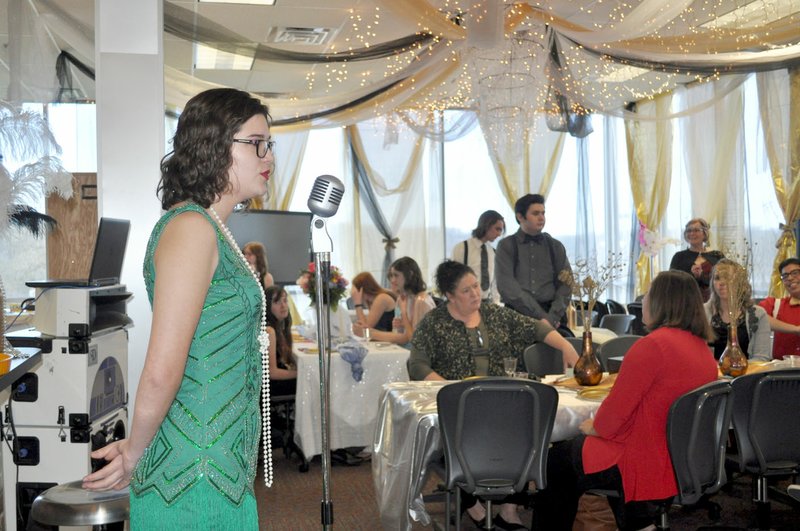 RACHEL DICKERSON/MCDONALD COUNTY PRESS Elena Josephine, dressed in a 1920s-style dress, sings during the Gateway luncheon at the McDonald County High School library on March 12, 2020. In the background, lavish decorations can be seen.

The McDonald County High School library held its annual Gateway luncheon on March 12 with over-the-top decorations, a catered lunch and a talk from a Gateway nominated author.

Librarian Jill Williams said every year there are 15 Gateway Award nominees from authors in the United States. High school students in Missouri are required to read at least three of the books to come to the special luncheon. Everyone in the state votes on that day for their favorite book, which determines the Gateway Award winner for the following year.

"At the Missouri Association of School Librarians in April, we have a big banquet. They will announce first, second and third place," Williams said.

Williams noted she was able to get one of the nominees to come and speak at the luncheon, Jennifer Latham of Tulsa, who wrote Dreamland Burning. The book is set in the 1920s, which, combined with the fact that it is now 2020, gave the library club its theme for the event -- a 1920s speakeasy. A secret knock was used to allow guests to enter the library.

Several students were dressed in period costumes. Gold and silver decorations hung from the walls and ceilings, the product of a few months' work by the library club.

"I like to do it big. These kids just work so hard," Williams said.

She added, "They don't often get opportunities to do some of these things, so if I can provide an opportunity for them to have a catered meal and get to dress up, I want to do that."

Jennifer "Jen" Latham said her book, Dreamland Burning is a murder mystery set in present-day Tulsa and also in 1920s Tulsa. It is about a young woman, Rowan, who lives in an old mansion and finds a skeleton in the servants' quarters when demolition is taking place to turn the area into her father's man cave. She tries to find out who the skeleton belonged to. In the part of the book set in the 1920s, the reader finds out who the skeleton belonged to. The book also has to do with the Tulsa Race Massacre.

"It was really cool that it got nominated to the Gateway list," Latham said.

She was impressed by the decorations at the luncheon.

"I have never seen anything this spectacular done by a librarian. I think this school has a pretty unique librarian," she said.

Julie Holloway, principal of the high school, said, "This is amazing to recognize our student readers and to promote the Gateway books. To hear an author's personal experience in getting published. We have some students who are amazing writers. I'm excited that we can have this opportunity at our library."