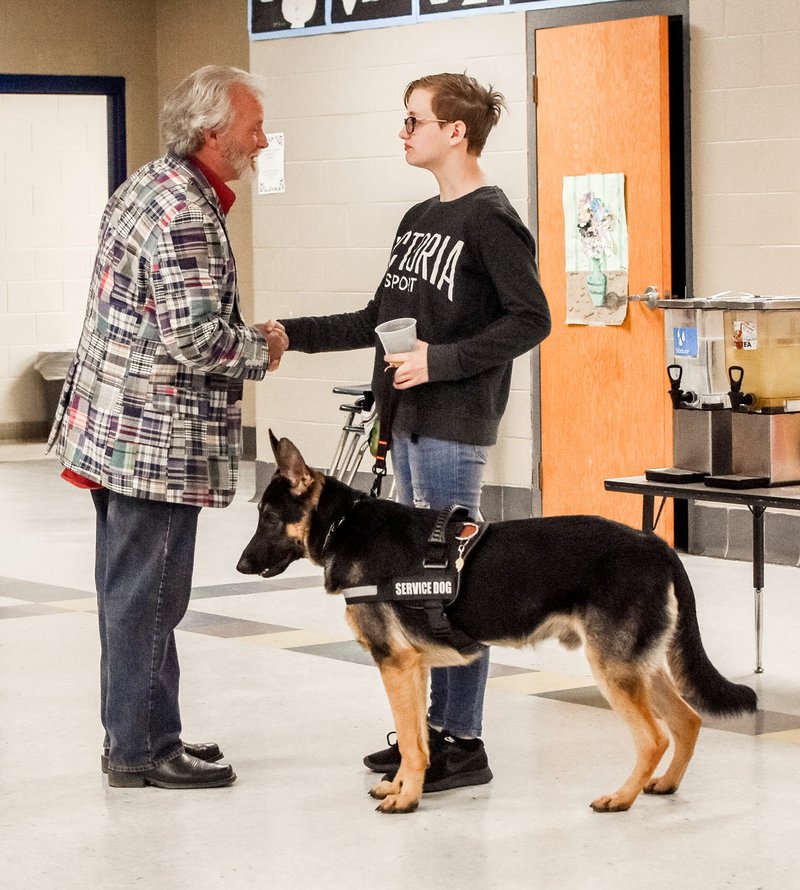 Courtesy photo Gracie Key thanks auctioneer David Barber at a fundraiser Friday night. Funds raised will help the Key family pay for the remainder of training for Gracie's service dog. The Key family also hopes to start a new nonprofit organization to help others who need a service dog.

The community's support has shown Danea Key how much neighbors truly care.

McDonald County residents have shown overwhelming assistance to support service dogs and therapy. Friday night's fundraiser was a hit and several people banded together to make sure a significant amount of money was raised.

One gentleman's actions in particular, however, proved to be a sweet reminder of putting others first.

An older gentleman approached Key on Friday night at the fundraiser. The man said he couldn't stay very long; he wanted to get home by sundown. But he said he was intrigued by the article he saw and wanted to help support the Keys and their service dog and therapy mission. He wrote a donation check and gave it to her.

Later, after the barbecue dinner, Key saw the gentleman again. She was inquisitive about his longer-than-planned visit.

The visitor told Key that there wasn't a big enough crowd to raise the important funds they needed.

He ended up staying for the live auction, Key said, and was one of 28 bidders who helped raise a little more than $6,000. The money will help pay for the rest of Saber's training, as well as help the Keys start their own nonprofit organization. The Keys want to help pay for service dogs' training for others.

Key's daughter, Gracie, has grown tremendously since having Saber, a service dog. Life "Saber" is a twist on the phrase, "lifesaver," which the service dog has proven to be for Gracie. The two are nearly inseparable. Saber offers love, comfort and a solid presence for Gracie, who has suffered from anxiety and other issues.

The family and friends worked hard to organize Friday night's event, which was held at White Rock Elementary. Key said the family hoped to host 200 people, but as the week went on, knew that the coronavirus scare could impact their fundraiser.

The community really pulled together to make the live auction and silent auction successful. "We were beyond blessed. It was beyond exciting," she said. "After it was over, we all just sat back and said, 'Wow.'"

The next morning, the Keys traveled to Memphis to help with another fundraiser. They had hoped to partner with Brock and Sherry Meeks of Hero's Helping the Heartland, to start a new nonprofit to help others. That fundraiser, too, was successful. Unfortunately, that nonprofit's board members weren't all on the same page as the Keys when the new nonprofit's specifics were discussed.

Now, the Keys have started work on their own nonprofit, Saberlife Foundation. The Keys are filling out paperwork with their accountant and following through a series of steps to create a nonprofit.

After they become certified through the state, they will have to obtain IRS certification as well. They also are taking applications for those who would like to have a service dog.

Another fundraiser is planned for the future, Key said.

For now, the Keys feel very grateful for the community who has pulled together to help them. Muehlebach provided a delicious meal. Auctioneers David and Shirley Barber of Butler Creek Auction Gallery, who donated their time, were "phenomenal."

"We are so grateful for everyone," Key said. "It's just amazing."