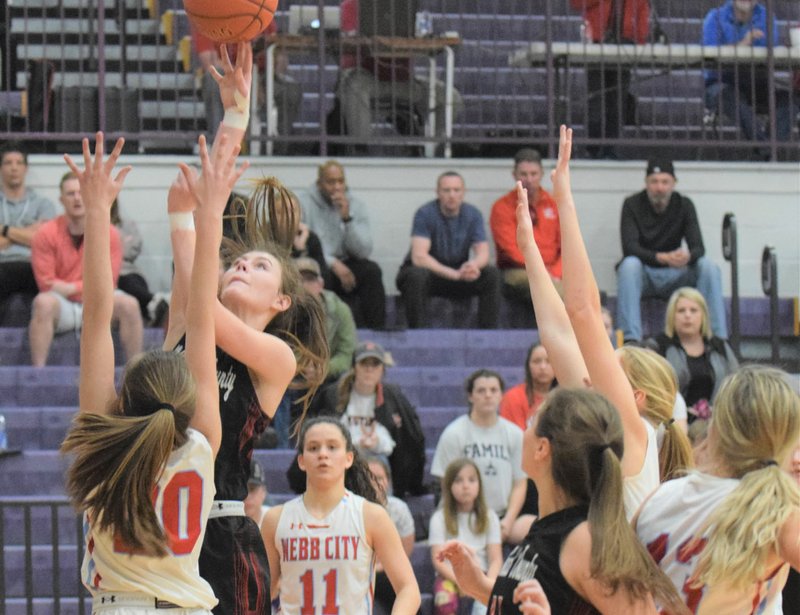 The McDonald County High School girls' basketball team spent most of its district semifinal game against Webb City climbing a mountain. But once the team got to the summit of that mountain, it fell off.

McDonald Country scored the first basket of the game, but Webb City took the lead with five consecutive points. The Lady Cardinals proceeded to hold the lead, as many as 11 points at one time, for the next three and a half quarters.

But trailing by 32-27 early in the fourth quarter, McDonald County scored six straight points to take its first lead since its opening basket at 33-32 with 2:51 left in the game.

However, after taking the lead, the Lady Mustangs were held scoreless the rest of the game while Webb City reeled off 10 straight points to claim a 42-33 win on March 3 at the Missouri Class 4, District 12, Basketball Tournament at Monett High School.

"We wanted to grind it out all game and give ourselves a chance at the end," said coach Chris Kennedy. "We did a pretty good job of doing that and made it into our kind of game. We just didn't get a few shots to drop in the second half and they built a lead. But then the girls did a great job of coming back and getting the lead, but we just couldn't hold on to it. We just kind of let it slip through our fingers, but we showed a lot of heart and hustle to get back into it against the caliber of team that Webb City is."

Webb City led 5-3 after the first quarter and 20-15 at halftime before entering the fourth period with a 29-24 advantage.

McDonald County finishes the season with a 10-17 record in the final season at MCHS for four seniors, including Santillan and Ragan Wilson. Also lost to graduation will be Jaylie Sanny and Alexia Estrada.

"We have built a good foundation the past couple of years," Kennedy said. "This group of seniors has led us the past two years and has contributed to our success. We left a couple of wins out there this year but, hopefully, by next year, we will learn from our mistakes and win those games."