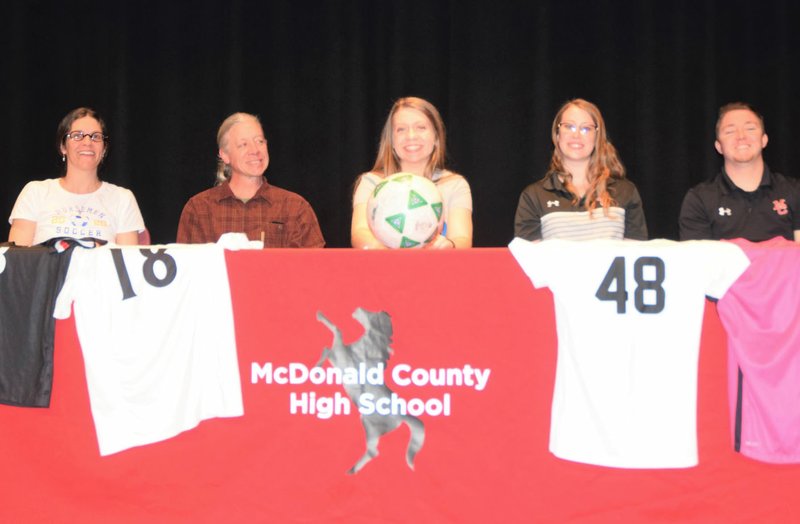 McDonald County High School's newest sport has provided a college opportunity for one of its players.

Ava Smith, a defender for the Lady Mustang soccer team, recently signed a letter of intent to continue her soccer career at Northeastern Oklahoma A&M Junior College in Miami, Okla.

"It was very exciting to sign," Smith said. "It's something I have always wanted to do -- play in college. I am glad I get the opportunity to do so."

Smith is one of the few players on the Lady Mustangs' team that had any experience before beginning their high school careers at MCHS.

Smith is a veteran, having played for 13 years.

"So, I started playing when I was four or five years old," Smith said. "It was at the YMCA in Joplin. Then I started playing on a travel team and have ever since. My last team was the Pink Panthers, coached by Sean Briley. He is a great coach. A majority of the girls on the team are on a college team now. His daughter plays at Drury now."

An academic letter winner for all four years at MCHS, Smith said she chose NEO because it provides the classes necessary for her degree in dental hygiene.

"I like NEO because it has a great soccer program and the coaches are awesome and I like all the players who I have met," she said. "It also gives me a chance to get all the classes I need for dental hygiene. This way I can focus on that my last two years of college."

In addition to soccer, Smith is involved in FFA and participates as a member of the school's archery team, where she was a state qualifier.

Smith said that, even though she has signed with NEO, her focus now is her senior season year at MCHS where she hopes to make all-district after being named honorable mention last year.

"Ava is one of our most technical athletes on the field," DelaTorre said. "She is really good on the ball with both feet. On top of her skills, she is quick and knows how to move. She is one of the most athletic players on the team."

But as good as her skills and athletic abilities are, DelaTorre said the intangibles might be her biggest asset.

"As a person, she is a great leader," DelaTorre said. "She is very smart on and off the field. She understands a lot of different positions and has the ability to recognize a lot of different situations. She helps the less experienced players a lot. She was a captain last year as a junior and will be one this year too."

Smith said, in addition to all her coaches, lots of people had a hand in her reaching her dream.

"I would like to thank my parents (Jamey and Kristi Smith) and teammates for supporting me throughout my many years playing," Smith said. "Without all you people that I have had an opportunity to learn from, I would not be the person or the player that I am today."