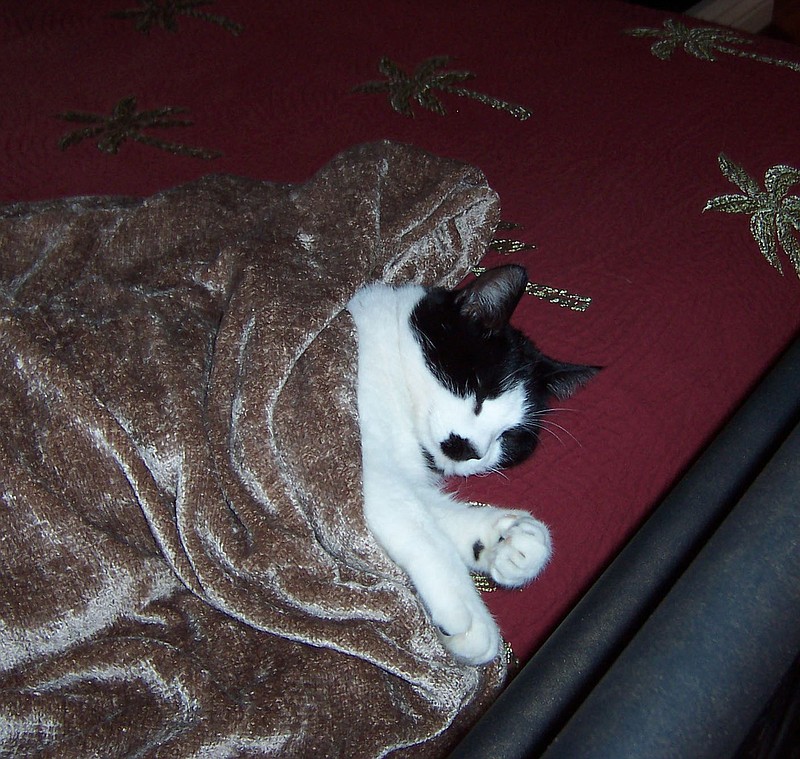 I sometimes marvel at just how stupid one human being can be. Oh relax; I'm not talking about you. I'm talking about the one person who continues to amaze me when it comes to the extent that one person can go to when exhibiting such a high degree of stupidity, namely yours truly, me.

I've talked to you before about my cat, "Scratchy Cat." She's a furry black and white American Shorthair who believes I live with her rather than the thought that she lives with me. To that, I say, "Poppycock." Please forgive my language. Anyway, we live together and have done so, just the two of us, for going on seven years now.

There are several little idiosyncrasies about the cat which seem to annoy me. Oh sure, I have my own eccentricities with things such as shoes, the arrangement of clothes in the closet and the accumulation of seemingly useless items but I am not one to stare. And, it is that trait of the cat which bothers me most; her attempts to covertly watch, and yes, spy on me.

In particular, I find that I am quite bothered by her attempts to spy on me from the bend in the hallway wall. She loves to sit just around the bend in the wall and with only a small portion of her face visible, watch me as I move about the living room. God only knows what she's thinking as she quietly sits there, just watching.

The walking surface of the hallway consists of hardwood flooring, and I do mean "hard wood." Those surfaces by no means encourage anyone to lay on them but I developed a plan, an ingenious one at that, which would necessitate my lying face down on that hard unforgiving surface.

One evening an opportunity presented itself to me. There she was, there at that corner of the hallway. I could just see part of her head and two green eyes. Her head didn't move even an inch and she thought she was oh so very clever.

I thought I'd play a little trick on her; teach her that she's really not that clever after all. I removed my shoes, my black size 9 1/2 Adidas Superstar shoes and quietly walked on stocking feet towards the bend in the hallway. Then I slowly lowered myself onto the hardwood floor and brought myself to rest on my stomach.

My idea was to allow her to slightly retreat from her position then, and this would be so beautiful, look around the corner of the wall at her. As I so carefully peered around the corner I saw her. She was sitting only inches from me and then she reached out with her foot and slapped my face. Well to be completely honest, she just touched my cheek. It was such a light and gentle touch and was far more humiliating than had she slapped my face with some force. She was just taunting me.

Now, this is where my stupidity rises to a level that you may find hard to believe. After the passage of a minute or so, I repeated my previous action; you know looking just around the bend in the wall. I thought she had proven her point and retreated to the bedroom, but I was wrong. I once again looked around the corner and as any sane person might anticipate, she slapped my face once more. She thinks she is so darn secretive and stealthy.

It seems that, following any lesson designed to show my dominance over the cat, I came away with at least one valuable lesson learned. This experience was no different. I found that the cat has more patience than I and I discovered that for someone my age as uncomfortable as laying on a hardwood floor may be, getting up again is far more difficult.

No, I was not going to attempt a third and more embarrassing look around that bend in the wall. However, something odd did enter my mind. Suppose I would be unable to raise my old bones off of that hardwood floor. You know, one of those, "I've fallen and I can't get up," moments. I hadn't actually fallen but then that is the easier of the two steps isn't it. Getting up is the hard part.

Suppose I had to call for help. I would have to give the emergency responders the secret code to my garage door opener and after entering the house I know just what two questions he would ask. "So, are you OK? What happened?"

"Well sir," and I would describe to him, or her as the case may be, the details of my ill-thought-out plan.

"Let me get this straight. You laid face down on the floor so you could look around the corner and see your cat?" "That's right, that cat right over there." "And why didn't you just walk down the hallway and look at her?"

"She thinks she's just so dad-gum sneaky and I had to prove to her that I was aware of her constant spying."

"You say the cat slapped your face?"

"That's right, she slapped me twice."

"I hate to admit this but I looked around that corner a second time."

You know, if one chooses to embarrass one's self they might just as well go all the way.

After the passage of some seconds, much less than a minute, the cat came from around the corner. She passed my still prone torso giving me little or no notice. She did however utter a soft "meow" which I then and will forever believe means "stupid" in the language of cats. Oh, how she loves to torment me.

After the second and final slap, and after my thoughts of potentially calling for assistance, I discovered that I was able to raise myself to a standing position. I will, however, and quite grudgingly acknowledge, that there were several grunts, groans and a few strange gyrations.

I know what you're thinking. If this fool was lying on the floor, unable to get to his feet, how could he get to the telephone and make a call for help? Well, this is the part of my scheme which I may have forgotten to mention.

I had in my back pocket my Samsung smartphone with the new and improved camera feature. As my plan unfolded, at least as I had hoped it would unfold, I would snap a picture of the surprised look on the cat's face as I peered around the corner. Now that I look back on the flawed plan, I would have been better served if I had shown the cat how to use the camera feature on the phone. She could have then taken a photo of the surprised look on my face.

I suppose the cat chooses to tolerate my presence in spite of the glaring ignorance which I continue to show. Maybe she feels sorry for me or possibly she finds some amusement in routinely, and predictably, outsmarting me. Who knows? She just reached out with that left front paw. Luckily for me, there were no extended claws. I think that the next time I find her fast asleep on the bed, I'll ever so softly touch her face. That will show her who's smarter.

Okay, the cat didn't actually slap my face. I'd like to more precisely call the two touches with her claw withdrawn paws love taps, but I suppose a more accurate description would be "hey stupid taps." Once again the black and white feline got the better of me.

Upon learning of this tale's creation, a friend posed a question reeking of sarcasm. "If your cat is so darn smart, I guess she'll read the story when it comes out in the paper?"

Stan Fine is a retired police officer and Verizon Security Department investigator who, after retiring in 2006, moved from Tampa, Fla., to Noel, Mo. Stan's connection to Noel can be traced back to his grandparents who lived most of their lives there. Stan began writing after the passing of his wife Robin in 2013. Opinions expressed are those of the author.