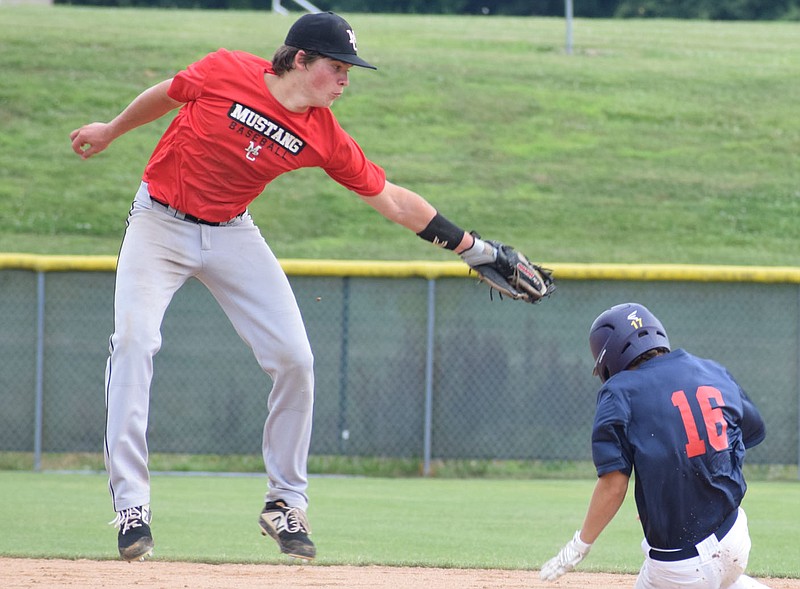 RICK PECK/SPECIAL TO MCDONALD COUNTY PRESS McDonald County shortstop Nevin Price tries to put a tag on a Little Rock Patriot runner after tracking down a high throw during McDonald County's 8-6 loss in the 18U Mid-South Showcase held June 19-21 in Springdale, Ark.

The Arkansas Express defeated McDonald County, 12-4, on June 21 at the 18U Mid-South Showcase held June 19-21 at Randal Tyson Sports Complex in Springdale, Ark.

The loss was the third in three games of the tournament for McDonald County.

Izak Johnson took the loss for McDonald County, allowing seven runs on seven hits and four walks. Riley Boyd relieved in the sixth, allowing five runs on one hit, three walks and a hit batter in an inning and a third. Colton Ruddick worked an inning and two-thirds, allowing no runs on no hits and two walks before Logan Harriman worked a scoreless ninth without allowing a hit.

McDonald County scored its first run in the third on singles by Cross Dowd and Ruddick before adding three runs in the seventh.

Cole Martin led off the inning with a single before a single by Destyn Dowd and a walk to Weston Gordon loaded the bases. Two runs scored on an error when Harriman reached on a fielder's choice before Cross Dowd drove in the final run with a single.

Cross and Destyn Dowd led McDonald County with two hits each, while Martin, Ruddick and Weston Gordon had one each.

McDonald County scored five runs in the seventh and eighth innings, but that was not enough in an 8-6 loss to the Little Rock Patriots in the second game of the tournament.

Little Rock led, 8-1, entering the bottom of the seventh, but McDonald County scored three runs in the inning to cut the lead to 8-4.

Nevin Price and Martin singled to start the rally. Junior Eliam followed with an RBI single before Destyn Dowd drove in the second run with a sacrifice fly. With two out, Gordon drove in the final run of the inning with a single.

In the eighth, Jackson Behm and Price got the inning started with two-out singles. Martin and Eliam followed with RBI singles to cut the lead to 8-6, but Little Rock escaped further damage in the inning on a flyout and then shut out McDonald County in the ninth for the win.

Cross Dowd went six innings for McDonald County, allowing eight runs on 12 hits while walking six and striking out eight. Price shut out the Patriots without a hit the rest of the way, striking out five in three innings.

McDonald County's first run came in the first inning on singles by Martin and Eliam.

Eliam finished with four hits and Martin three to lead McDonald County. Ruddick and Price added two hits each. Harriman, Gordon and Behm had one.

The Arkansas Stix defeated the McDonald County 18U baseball team, 13-1, in the opening game of the tournament on June 19.

The Stix scored one in the first and added four in the second off McDonald County starter Bo Leach. Leach allowed just three hits, but walked four and hit three in two innings of work. Boyd shut out the Stix in the third and fourth innings but allowed five runs on two hits, two walks and two hit batters in the fifth.

McDonald County scored its only run in the fourth inning. Leach walked before Martin doubled to put runners on second and third. Eliam was hit by a pitch to load the bases before Destyn Dowd walked to drive in a run.

Martin's double and a single by Isaac Behm were the only hits for McDonald County.

McDonald County picked up its first win in the Joplin 8-on-8 league with a 13-6 win over Seneca on June 17 at Joe Becker Stadium in Joplin.

McDonald County was set to play Carthage in a league game on June 24 at Joe Becker Stadium. 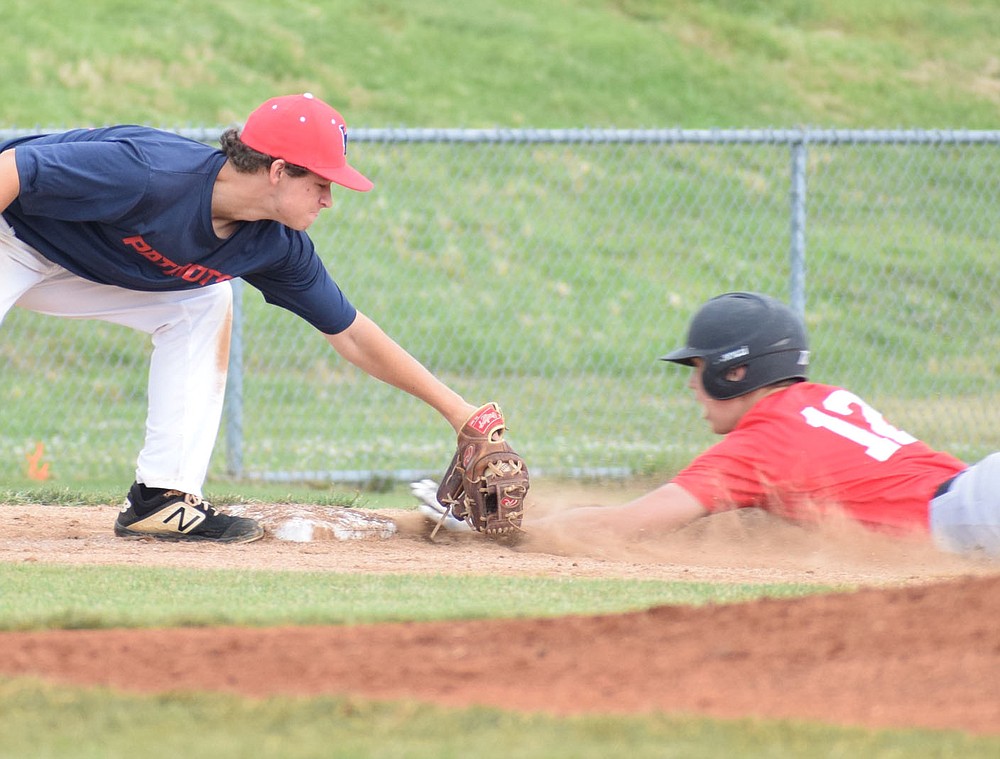 RICK PECK/SPECIAL TO MCDONALD COUNTY PRESS McDonald County's Colton Ruddick gets tagged out at third base during McDonald County's 8-6 loss to the Little Rock Patriots in the 18U Mid-South Showcase held June 19-21 in Springdale, Ark.