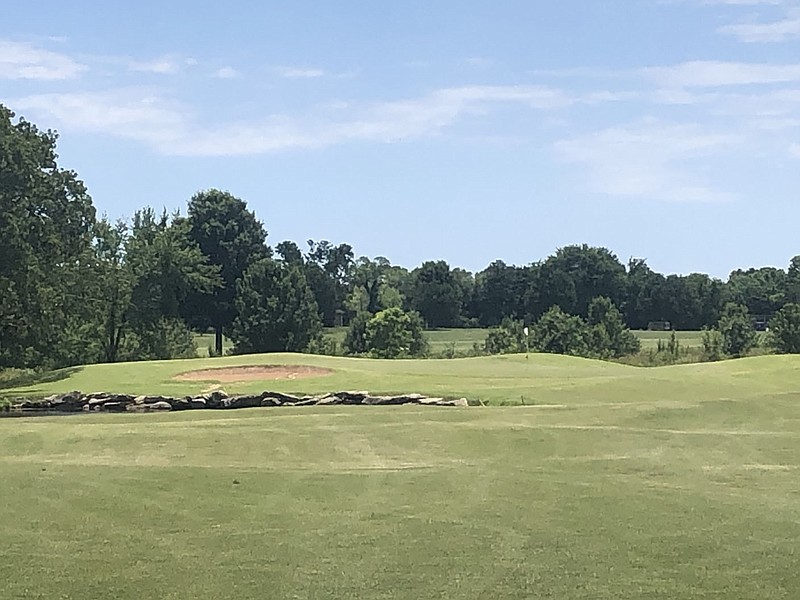 RICK PECK/SPECIAL TO MCDONALD COUNTY PRESS The 14th hole at Patricia Island Golf Course requires a second shot over a pond and bunker guarding the green.

The old-time farmers around McDonald County used to say, "It doesn't matter how wet it is; we are just a week away from a drought."

This spring proves that to be mostly true.

After an unusually wet late winter and spring, the past couple of weeks has been the longest dry spell since I don't know when -- and it shows.

The course for this week's story was the Patricia Island Golf Course in Grove, Okla. Patricia is one of the more pricey golf courses in the area, but last year it offered a three-year limited membership special that made it very affordable -- even for a semi-retired newspaper guy.

After taking a couple of weeks off, I was itching to play. I felt confident I would show improvement from my last few rounds before the time-out.

Stepping up to the tee on number one, a short par 4 with trouble left and right, but with a fairly generous fairway, I hit one of my longest drives I have ever had on the hole. It was also right down the middle of the fairway -- like I said, the fairways were firm.

But, actually, the drive went too far, leaving me with a delicate uphill chip over a bunker. I thought I hit a good shot, but it landed like it hit concrete and rolled off the back of the green. My first putt came up about four feet short and a miss on my second left me with a bogey on one of the easiest holes on the course.

Number two is a short par 3. I made a routine par after hitting a gap wedge to 25-feet from the hole.

Number three is a tough, dogleg to the right par 4. My drive was short and right (so much help with my tempo from the layoff). My approach to the green was blocked by a tree guarding the green from the right side.

I hit a 5-wood with about a 30-yard slice just short of the green. A good pitch left me a "give-me" for my second par in a row.

A missed 15-foot birdie putt on the par 5, fourth left me with my third consecutive par.

But the old Rick showed up on number five. A fairly short par 4 with trouble down the right that was going to gobble up my drive from the moment it left the club.

After I had taken a penalty stroke and layout, my next shot was blocked by a tree, again requiring another 30-yard slice. Only this time, I hit it straight -- normally a good thing but not so much when you need to curve it almost straight right.

I couldn't find this ball either at the time, so I dropped another and finished the hole. I did find my ball when I went to the next tee. It was across a road on the side of the next tee box. I would have had a better shot from there than from where I dropped it if I had found my ball before finishing the hole.

The rest of the day was more of the same -- good shots and bad shots. I made a birdie on a par 5 on the back nine. I also made a pair of double bogeys along the way -- both by being short-sided to a sloping green with my approach and not being able to stop the ball close to the flag with my chip because of the firmness of the greens.

I used to be. Years ago, my friend and I would play against his son, his son's wife and his son's sister-in-law. Us two old-timers would beat them every time. His son said we "would walk it down the fairway" because we couldn't hit far enough to hit it out of play.

The best thing about these matches was the fighting -- between the partners on the other team.

One day at Berksdale in Bella Vista, we were beating them so bad and they were fighting amongst each other so much, they conceded the match and played the last four holes with my son's friend taking on the two women.

The match was close after three holes -- mainly because my friend's son cheated on the next to the last hole. It was an elevated green and my friend's son's approach shot hit the side and bounced into a hazard.

But he ran across the green to drop a ball in play before his opponents could see him. Even though once, he got on the side of the hill, fell and rolled to the bottom; he had time to hop up and drop a ball before they saw him.

He got his just rewards on the last hole. His wife was well past the green of the par 3 with her tee shot, but her second shot was like a missile at the flag where it clanked and dropped in for a birdie.

My friend's son didn't finish the hole, partly because he threw his wedge well back down the fairway when his wife made her birdie.

Back to this week's round -- I think this short layoff helped a little, maybe a longer one will help even more. It's getting pretty hot so I think I'll try it. 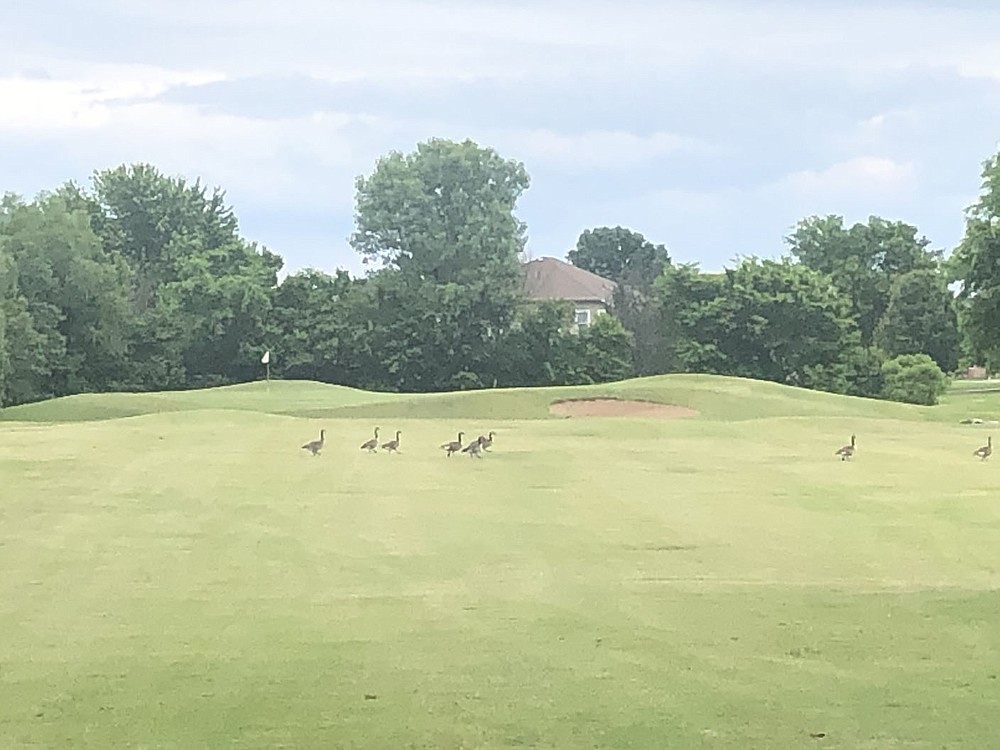 RICK PECK/SPECIAL TO MCDONALD COUNTY PRESS Geese walk across the fairway of the fourth hole at Patricia Island. The hole is a par 5 with a ditch in front of the green ready to gobble up any short approach shots.