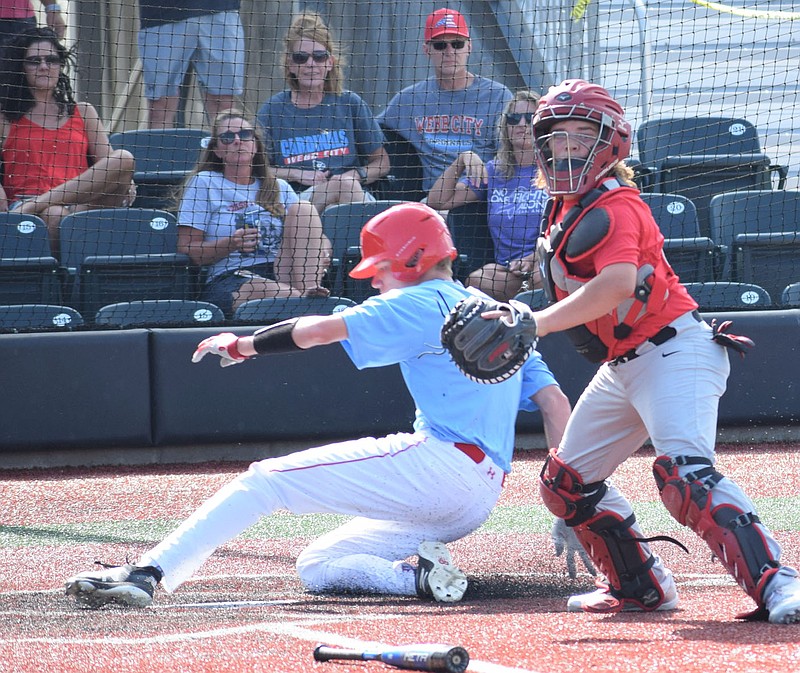 RICK PECK/SPECIAL TO MCDONALD COUNTY PRESS McDonald County catcher Jakob Gordon prepares to throw to first after forcing out a Webb City runner at the plate in the McDonald County 16U baseball team's 22-16 loss in an 8-on-8 league game on June 9 at Joe Becker Stadium in Joplin.

The McDonald County 16U baseball team matched the 18U team's record from a week before at a tournament in Coffeyville, Kan.

The team finished with a 2-2 record after splitting games on June 13-14 at the Coffeyville 16U Baseball Tournament.

McDonald County opened the tourney with a 10-3 loss to the Northeast Oklahoma Walk-Off.

Gordon held the Walk-Off to just two runs through four innings and took a 3-2 lead into the bottom of the fifth. But back-to-back walks to open the fifth inning led to an eight-run inning for the team from Northeast Oklahoma.

A one-out triple scored two runs before a walk and an error ended Gordon's day. Braxton Spears allowed three hits, a walk and hit a batter before getting the final two outs.

McDonald County scored a run in the third without a hit and added two in the fifth on a hit by Ryan Goswick, a walk to Jack Parnell and two errors.

A double by Cole Martin and Goswick's single were the only McDonald County hits.

McDonald County bounced back with a 10-0 three-inning win over the Dallas Pirates in its second game.

Destyn Dowd got the win, going the distance to shut out the Pirates on two hits while striking out five.

Martin's RBI single in the first gave McDonald County a 1-0 lead before it erupted for nine two-out runs in the second inning.

McDonald County defeated the Springfield White Brothers, 7-6, in its first game on June 14.

Cross Dowd went the distance for the win, allowing six runs on three hits and six walks while striking out eight.

Martin and Destyn Dowd had two hits each to lead McDonald County, while Jakob Gordon, Isaac Behm, Devin Stone, Rylan Armstrong and Goswick had one hit each.

The Tulsa Bison claimed a 6-3 win over McDonald County in the final game of the tournament.

McDonald County scored a run without a hit in the first before scoring two runs in the fourth on a single by Parnell, a double by Martin and two Tulsa errors. Parnell's and Martin's hits in the inning were the only McDonald County hits in the game.

Both McDonald County and Webb City scored early and often in an 8-on-8 league game on June 9 at Joe Becker Stadium in Joplin.

But Webb City scored more and more often on the way to claim a 22-16 win.

The Cardinals took a 6-0 lead after batting in the first and second innings. The Cardinals had six hits, while McDonald County committed three errors in the two innings.

But McDonald County answered with six runs in the bottom of the first. Two errors got the McDonald County rally started before hits by Cross Dowd, Weston Gordon, Destyn Dowd, Coty Dumond and Cooper Sprenkle tied the game at 6-6.

Joplin added two runs in the third, three in the fifth, single runs in sixth and seventh before sealing the win with five runs in the eighth and four in the ninth.

McDonald County scored a run in the fourth and sixth innings and added four runs in both the eighth and ninth innings.

McDonald County took on Carthage on June 16 in its next league game. 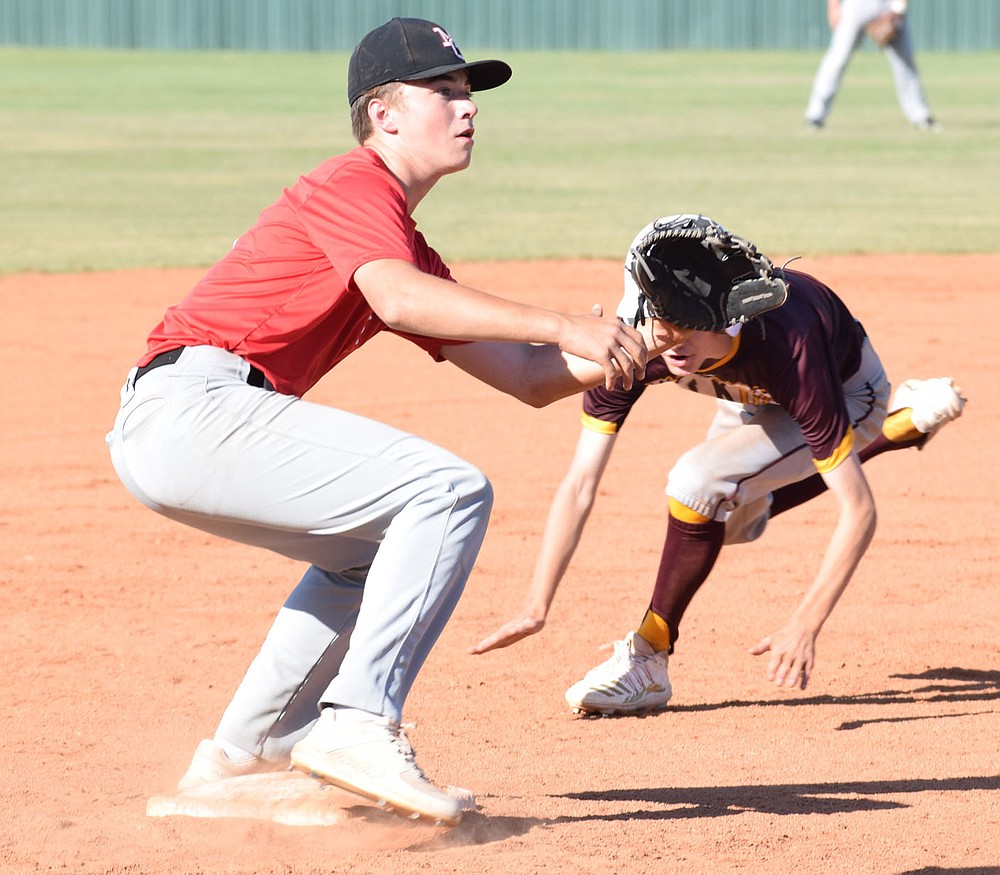 RICK PECK/SPECIAL TO MCDONALD COUNTY PRESS McDonald County third baseman Coty Dumond waits for a throw during the McDonald County 16U baseball team's 10-3 loss to the Northeast Oklahoma Walk-Off on June 14 at the Coffeyville 16U Baseball Tournament.