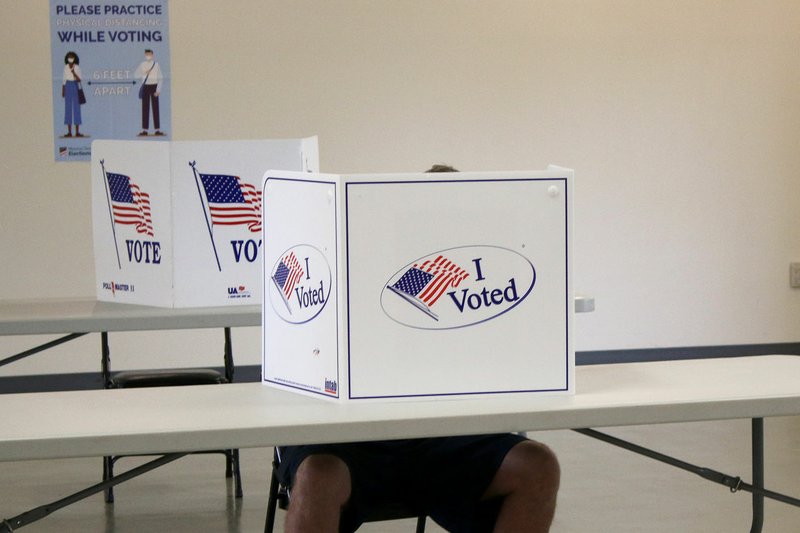 MEGAN DAVIS/MCDONALD COUNTY PRESS Nearly 15% of the 13,498 registered voters in McDonald County participated in the 2020 General Election, with respect to CDC recommended social distancing. Voters all received a complimentary pen, declaring "I Voted in McDonald County," to aid in preventing cross-contamination from re-used writing utensils.

Of the 13,498 registered voters in McDonald County, 2,013 (14.91% percent) showed up at their polling location to cast their votes in the 2020 General Election. This number reflects an almost 6% increase in voter participation from the 2019 General Election.

These results are unofficial until official certification on Friday, June 5. If any changes in election results occur, they will be published in an upcoming issue.

• Shall the Board of Education of Neosho R-V School District of Newton County, Missouri be authorized to (a) increase the operating tax levy by $0.39 per one hundred dollars of assessed valuation for operating expenses of the District, including the increasing compensation for employees in order to attract and retain quality faculty and staff, and funding the costs of capital projects of the District and (b) fully waive the Proposition C operating tax levy roll back as provided under RSMo Section 164.013?

If this question is approved, the District's operating tax levy is estimated to increase from $2.75 to $3.14 per one hundred dollars of assessed valuation of real and personal property.

Mayor for City of Anderson

Question for the City of Anderson

• Shall the City of Anderson, Missouri, impose a local use tax at the same rate as the total local sales tax rate, currently one and one-half percent (1.5%), provided that if the local sales tax rate is reduced or raised by voter approval, the local use tax rate shall also be reduced by the same actions? A use tax return shall not be required to be filed by persons whose purchases from out-of-state vendors do not in total exceed $2,000 in any calendar year.

Village Trustee for Village of Jane

Municipal Judge for City of Noel

Marshal for City of Noel

Mayor for City of Pineville

Marshal for City of Pineville

Tax Collector for City of Pineville

Question for City of Southwest City

Board of Director for Stella Rural Fire Protection District

• Shall there be incorporated a Stella Fire Protection District supported by a levy up to $0.30 per $100 assessed valuation?