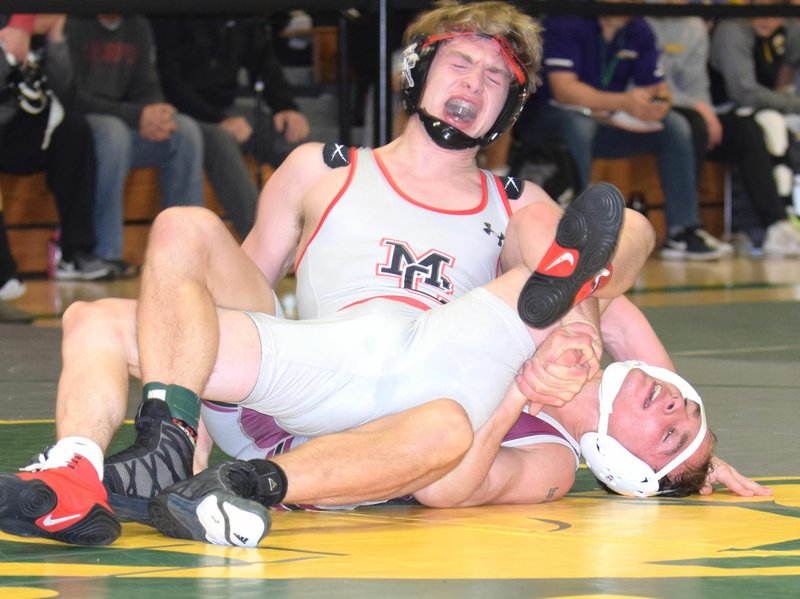 RICK PECK/SPECIAL TO MCDONALD COUNTY PRESS McDonald County's Oscar Ortiz tries to get Zach Fennel of Rolla to his back in the 132-pound championship match at the Kinloch Classic held Jan. 3-4 at Parkview High School in Springfield. Ortiz won the match with a 5-2 decision.

The third time was a charm for Oscar Ortiz. Despite being a state champion in 2018 and a state runner-up last year, Ortiz was 0-2 in tournament championship matches this season.

But at the Kinloch Classic held Jan. 3-4 at Parkview High School in Springfield, the McDonald County 132-pound senior escaped a close call in his final pool match before easily winning his quarterfinal and semifinal matches and then narrowly beating a familiar foe in the finals to claim his first title of the year.

Ortiz went 4-0 in his pool, dominating his first three opponents before pulling out a 9-8 win over Cole Harrell of Columbia Hickman in his final match of the pool.

Neither wrestler scored in the opening period. Fennel won the coin flip to start the second period and deferred his decision until the third period.

Ortiz chose bottom and took a 2-0 lead with a reversal about a minute into the period. But Fennel was able to answer with a reversal of his own in the final minute to even the match at 2-2 going into the third period. Fennel elected to give up a point to start the period at the neutral position only to see Ortiz record a takedown to secure his 5-2 win.

"This was the third time Oscar has beat Fennel, the last three times they have faced each other," coach Josh Factor said. "Oscar has been kind of banged up and we nursed him at practice this week. He also got a couple nagging injuries earlier in the tournament before the finals so it was definitely a good win."

Jack Teague won four pool matches and a quarterfinal match before getting pinned in the semifinals. Following that loss Teague was also pinned in the consolation finals before he won the fifth place match on a default.

Smith lost one of his three pool matches on his way to earning a fifth place.The freshman 120-pounder then lost in the quarterfinals before bouncing back to win his final three matches in the consolation bracket, including a pin over Chase Johnson of Reeds Spring in the fifth place match.

"Levi Smith had a great tournament," Factor said. "This was kind of his breakthrough tournament as a freshman. This was his first medal of his high school career. We have some good things to look forward to in the next four years.

"Jack had a couple of state placers in his bracket. We knew coming in that it was going to be a tough tournament. I think fifth place was his best finish at this tournament in the past four years."

Blaine Ortiz took sixth place (106) after being forced to default after injuring his shoulder in the consolation bracket. The freshman won four matches in the two-day tournament and lost three, including his default.

"We were pleased with Blaine's performance," Factor said. "Blaine's only going to get better. He also earned his first medal of his high school career. Lots of good things to come from Blaine."

"Eh Doh made the top eight and Colter Vick just missed out on a medal," Factor said. "Cross Spencer and McCoy were able to get a win. Overall, it was a good experience for the team."

McDonald County finished in 13th place in the team standings out of the 25 teams that competed.

The Mustangs are off until Jan. 16, when they travel to Neosho for duals against the Wildcats and Webb City.