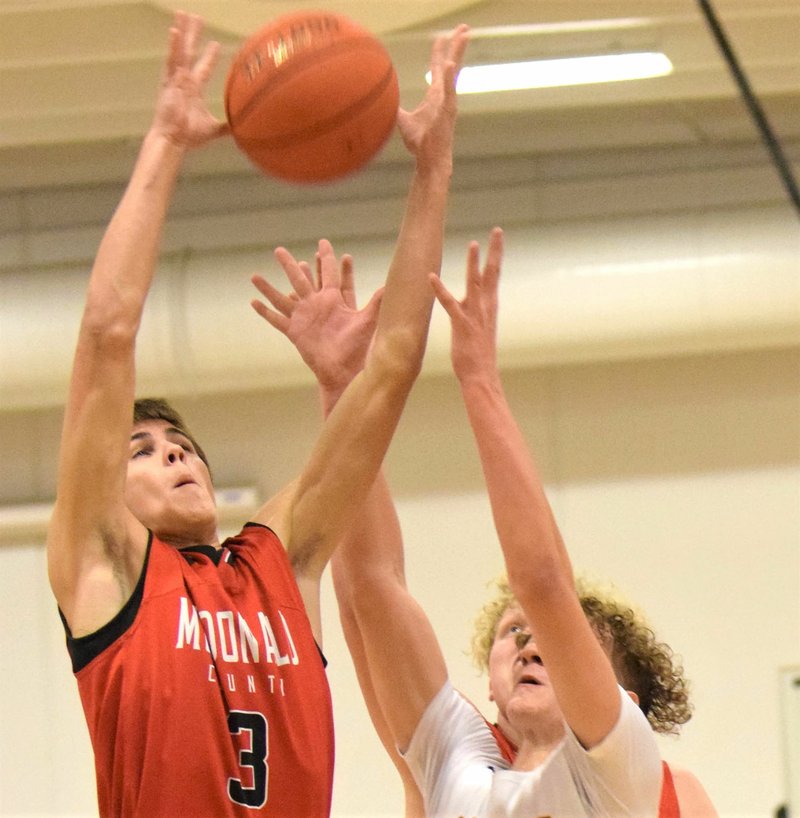 RICK PECK/SPECIAL TO MCDONALD COUNTY PRESS McDonald County's Cale Adamson blocks out Monett's Arijan Miftari for a rebound during the 65th Annual Neosho Holiday Classic held from Dec. 26-28 at Neosho High School and Neosho Middle School. Monett rebounded from a 10-point deficit in the third quarter for a 61-53 win.

After two losses to open the tournament, the McDonald County High School boys basketball team appeared on the way to salvaging its tournament with a win in the seventh-place game of the Black Bracket of the 65th Annual Neosho Holiday Classic.

McDonald County trailed the Monett Cubs by one at halftime but used a 15-4 run to start the third quarter to build a 40-30 lead midway through the period.

However, Monett closed out the third quarter by outscoring the Mustangs, 8-2, to cut the deficit to 42-38 entering the final period.

Monett's Cole McCullough hit a short jumper to open the quarter, but McDonald County's Cole Martin answered with a three-pointer to give McDonald County a 45-40 lead.

Monett then went on a 10-0 run, fueled by eight points by Trevon Price to take a 50-45 lead before Martin hit a layup with 4:13 left to cut the lead to 50-47. Cross Dowd followed with a short jumper to get McDonald County within one with 3:32 remaining.

Price made one of two free throws to stretch the lead to two, but Pierce Harmon's basket with 2:09 left tied the game at 51-51.

But the final two minutes belonged to Monett. The Cubs scored nine straight points to take a commanding 60-51 lead until Harmon hit a bucket with 13 seconds left to end the run. Monett hit a free throw with under five seconds left to make the final 61-53.

Cade Smith scored 19 points and Martin finished with 12 to lead the Mustangs. Rounding out the scoring for McDonald County were Harmon with seven points, Irael Marcos with five, Koby McAlister four and Dylan Allison, Teddy Reedybacon and Cross Dowd with two each.

McDonald County falls to 2-7 for the season heading into its Jan. 14 rematch with Monett at Monett High School.

McDonald County opened the tournament on Dec. 26 with a 56-38 loss to Huntsville.

The Eagles took control of the game from the opening tipoff, scoring the game's first 15 points before Reedybacon put the Mustangs on the scoreboard with just over three minutes left in the first quarter.

Reedybacon followed with his second basket for McDonald County's only points of the first quarter, but Hunstville closed out the period with a 4-0 spurt to take a 19-4 lead at the end of the period.

Huntsville stretched its lead to 30-11 at halftime and took a 37-17 lead into the final period. McDonald County closed to 44-34 with 3:25 left on three treys by Smith and one each by Harmon and Martin, but the Eagles closed out the game by hitting 12 free throws down the stretch to seal the win.

McDonald County was led by Smith with 13 points, followed by Harmon and Reedybacon with eight points each, Martin with three and Cale Adamson, McAlister and Marcos two each.

Lamar used 18-7 advantage in the second quarter to key the Tigers to a 61-46 win in the semifinals of the consolation bracket.

McAlister scored McDonald County's final four points of the first quarter to give the Mustangs a 10-9 lead at the end of the quarter.

But Lamar's dominance in the second period gave the Tigers a 27-17 lead at intermission.

Lamar took a 40-27 lead into the fourth quarter and McDonald County could get no closer than 10 points the rest of the way.

McDonald County was led by Martin with 11 points, followed by Harmon with nine, Smith eight, Reedybacon six, McAlister and Dowd four each and Adamson and Jackson Clarkson two each.

"We had three games this week we could have gotten a 'W' in and, offensively, we either grew stagnant or we stopped shooting well and everything just fell apart and got away from us at that point," said coach Brandon Joines. "Our defensive intensity has to lead to our transition game. We keep saying that and we keep saying that but we have to push the ball and execute. In the end, it comes down to whether or not that happens. At times it did, but at other times we back off, for whatever reason we get comfortable though we have no reason for getting comfortable.