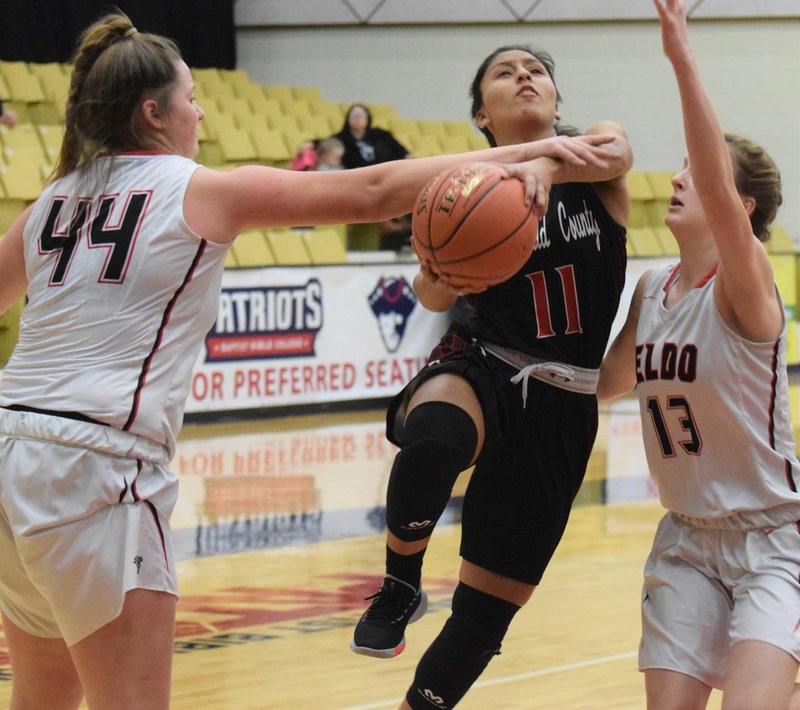 RICK PECK/SPECIAL TO MCDONALD COUNTY PRESS McDonald County's Rita Santillan splits El Dorado Springs' Chloe Middleton (44) and Macie Mays while driving to the basket during the Lady Mustangs' 56-39 loss on Jan. 4 in the Missouri Sports Hall of Fame Basketball Classics held at Baptist Bible College in Springfield. Middleton was called for a foul on the play, with Santillan making one of her two free throws.

The McDonald County High School girls basketball team stayed right with a talented El Dorado Springs team for three-quarters of the opening game of the Missouri Sports Hall of Fame Basketball Classics only to have the train come off the track in the fourth period.

The undefeated Lady Bulldogs led just 40-35 after three quarters, but a pair of three-pointers to start the final eight minutes led to a 16-4 advantage in the period as El Dorado pulled away to a 56-39 win.

"We weren't able to put the ball in the hole in the fourth quarter," said coach Chris Kennedy. "They went on an 8-0 to start the fourth quarter and we weren't able to answer that. When we didn't answer, it made it kind of a lopsided game at the end. If we can put the ball in the hole, we are a pretty scary team, I think. We played well, but it's like I told the girls from the beginning of the season, it comes down to us putting wide-open shots in the basket. If we can do that, I think we can play with anybody."

El Dorado jumped out to a quick 6-1 lead, but baskets by Caitlyn Barton and Ragan Wilson cut the lead to 6-5 before the teams traded baskets for the rest of the first quarter, which ended with El Dorado Springs holding a 12-11 lead.

The Lady Bulldogs scored the first four points of the second quarter to take a 16-11 lead, but Jaylie Sanny scored six of the next nine McDonald County points to help the Lady Mustangs tie the game at 20-20 midway through the period.

Tied at 22-22 late in the period, El Dorado Springs' Reese Schaaf scored the final four points of the first half to give the Lady Bulldogs a 26-22 lead at intermission.

Wilson hit back-to-back baskets in the third quarter to cut a 31-25 El Dorado Springs lead to 31-29 only to see the Lady Bulldogs score six straight points for a 37-31 lead.

Sanny hit a pair of free throws, but Tevi Gurley answered for El Dorado with a three-pointer for a 40-32 lead with under a minute to go in the third period.

Sanny followed with a short jumper and Rita Santillan made one of two free throws to help McDonald County cut the lead to 40-35 entering the final period.

But Schaaf and Gurley opened the fourth quarter with three-pointers to stretch the lead to 46-35 before Sanny scored from underneath to get the deficit back to under 10 points.

El Dorado Springs then hit nine free throws down the stretch, while the Lady Mustangs could not score other than two free throws from Wilson.

Sanny finished with 13 points and Wilson added 11 to lead McDonald County. Rounding out the scoring for the Lady Mustangs were Kristin Penn with five, Barton four, and Santillan, Laney Wilson and Samara Smith two each.

Schaaf finished with 22 points to lead El Dorado to its ninth win without a loss.

McDonald County falls to 3-6 heading into its Jan. 7 game at Springfield Hillcrest. The Lady Mustangs return home on Jan. 10 to host Aurora.