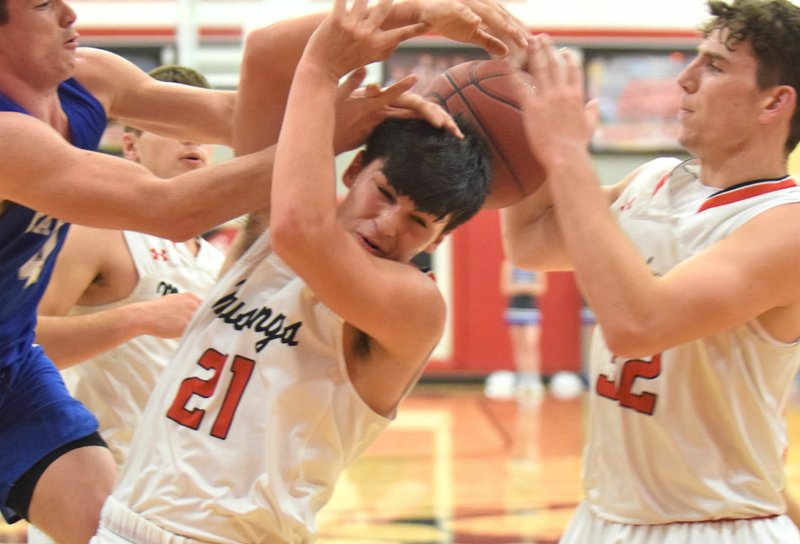 RICK PECK/SPECIAL TO MCDONALD COUNTY PRESS McDonald County's Jackson Clarkson gets in the middle of a battle between Carthage's Tyler Mueller and McDonald County's Cade Smith for a rebound during the Tigers' 70-34 win on Dec. 19 at MCHS.

Carl Junction scored the game's first six points on the way to a 21-7 lead at the end of the first quarter.

But McDonald County opened the second quarter with six straight points, including four by Koby McAlister and two by Cade Smith to cut the lead to 21-13. After a basket by Carl Junction's Jaden Cherry put the lead back to 10, Cole Martin and Smith hit back-to-back baskets to cut the lead to 23-17 midway through the period.

The Bulldogs' Brady Sims and McDonald County's Cross Dowd exchanged three-pointers to keep the lead at six, but Carl Junction closed out the half with a 10-1 run for a 15-point advantage at halftime.

Pierce Harmon scored four straight points to start the second half, but Carl Junction answered with a 9-0 run to help the Bulldogs take a 49-32 lead at the end of three periods.

Carl Junction built its largest lead of the game at 60-35 midway through the final quarter and cruised to the win.

"Our defensive hustle and intensity were right where it needed to be for the most part," said coach Brandon Joines. "We ran a little bit of a different defense today (1-2-2 zone) and gave them a different look. Overall, I am pretty happy with that. The problem with that particular defense is, when you give up second and third shots, it becomes very difficult because they are going to have an easy shot most likely. When we held them to one shot, it was wonderful. We did a solid job -- yea, they had a guy who could shoot -- but our rebounding was the difference. Inside was where we lost off that first shot. We forced the shot we wanted them to take and then we just didn't grab the rebound."

"I thought Koby McAlister and Cole Martin both played a heck of a game," Joines said. "They worked their tails off. We are going to have some turnovers, but they didn't force too much. We can have a few turnovers but we have to have the rebounds so we don't give up second and third shots. We can have turnovers if we play solid defense all the time, but we have to finish the possession by getting the rebound."

Carl Junction added a 61-51 win in the junior varsity game.

Sterling Woods scored 14 points and Teddy Reedybacon had 12 to lead McDonald County. Rounding out the scoring for the Mustangs were Dowd and Bo Leach with nine points each, Colton Ruddick had five and Gricks two.

The McDonald County freshmen kept the Bulldogs from a sweep with a 57-35 win.

The Tigers led 21-9 at the end of the first quarter and 33-21 at halftime before outscoring the Mustangs 20-9 in the third quarter to take a 53-30 lead into the fourth quarter.

Smith scored 11 points to lead McDonald County. Rounding out the scoring for the Mustangs were Martin with six points, McAlister and Jackson Clarkson with four each, Nevin Price with three and Harmon, Gricks and Irael Marcos with two each.

Carthage was led by Taris Jackson with 21 points.

Carthage used a 15-10 advantage in the fourth quarter for a 48-43 win in the junior varsity game.

Reedybacon scored 17 points and Dowd had 12 to lead McDonald County, followed by Woods and Gricks with six each.

The Tigers made it a three-game sweep with a 51-49 win in the freshman game, keyed by a 14-7 advantage in the fourth quarter.

Isaac Behm scored 22 points to lead McDonald County. Rounding out the scoring for the Mustangs were McClain with nine points, Woods seven, Parnell and Gordon four each, Kasen Hahn two and Jaxson Harrell one.