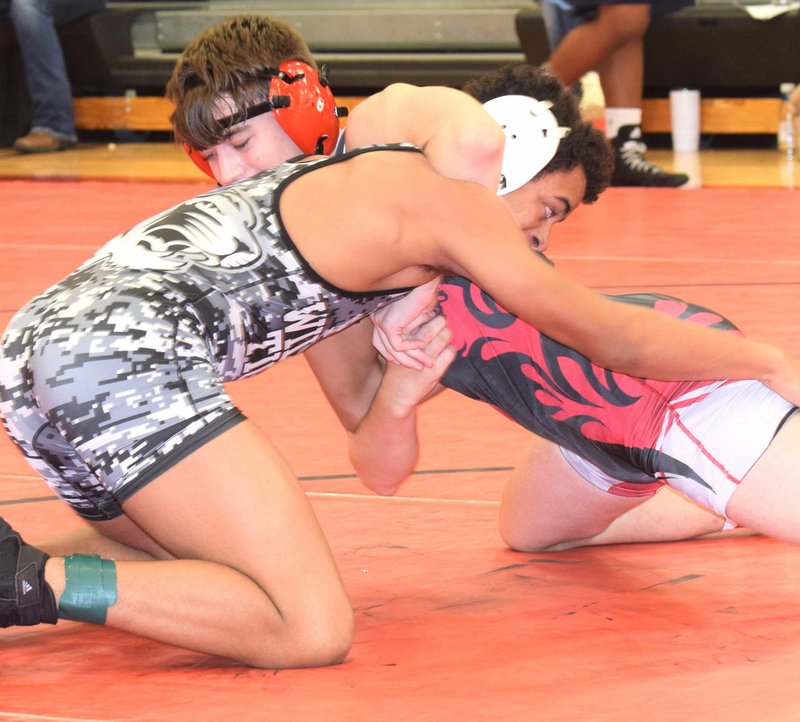 RICK PECK/SPECIAL TO MCDONALD COUNTY PRESS McDonald County's Coty Dumond and William Collier of Willard square off in a 145-pound match at the Sixth Annual Cal Willie JV Wrestling Tournament on Dec. 21 at MCHS. Collier won the bout with a pin late in the first period.

Morales claimed a 12-10 overtime decision over Cristian Salas of Carthage to open the tournament.

He won by pin over Cameron Osborn of Grove in the second round to earn a trip to the championship match.

But Joshua Harvey of Monett defeated Morales with a second-period pin to win the championship.

Donica's two wins both came by major decisions. He defeated Devon Paxtor of Carthage 8-0 in the first round and Jonathan Havelka of Grove 10-2 in the fourth round.

Owens claimed a 10-1 decision over Jose Gomez of Carthage in the first round and then defeated Rhyn Withnell of Monett 4-2 in the third-place match.

The McDonald County varsity team returns to action on Jan. 3 at the Kinloch Classic in Springfield.