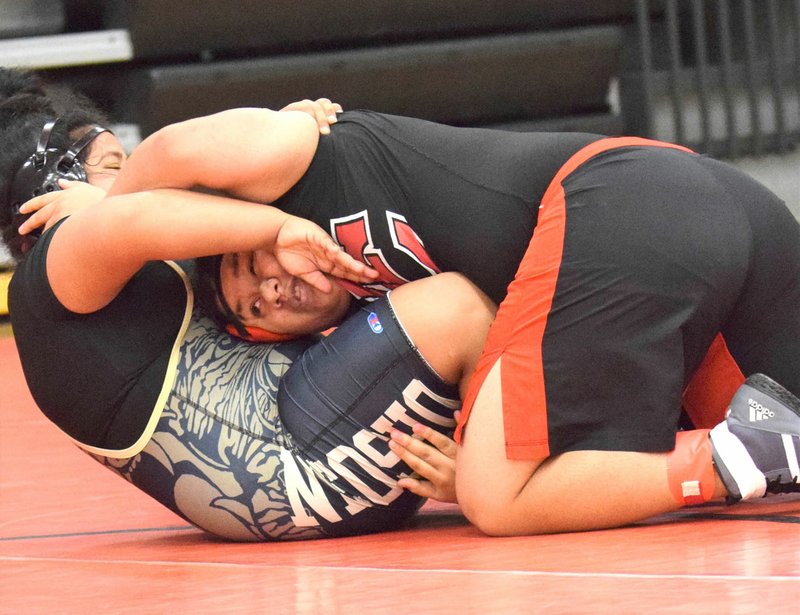 RICK PECK/SPECIAL TO MCDONALD COUNTY PRESS McDonald County's Kiona Saimon gets Neosho's Ronie Ramie to her back on the way to a pin at the McDonald County Girls' Wrestling Tournament held on Dec. 20 at MCHS. Saimon went on to record two more pins to win the 237-pound division championship.

Saimon began the tournament with a first-round pin (1:36) of Ronie Ramie of Neosho.

In the second round, it took Saimon 1:14 to pin Madison Good of Branson before the McDonald County freshman pinned Maria Orelllena-Serra in 26 seconds in the third round to win the title.

Jackie Grider and Kaylee Eberley both took second for the Lady Mustangs.

Grider and Lexi Harris of Reeds Spring were the only entrants in the 166-pound class. In a best two out of three, Harris won the first round with a first period pin (1:16).

But Harris claimed the championship with a pin at 1:37 in the first period of round three.

Eberley won one of her two matches in a three-person round-robin bracket at 152 pounds.

Eberley won her first match, a pin of Jessica Purvis, in just 56 seconds. In the title match, Branson's Erin Bohmont used a second-period pin to win the title.

McDonald County's only other entrant was Tevana Arnett, who lost both of her matches at 187 pounds.

The tournament drew wrestlers from eight high schools, but team scores were not kept.

The McDonald County boys' team returns to action on Jan. 3 at the Kinloch Classic in Springfield.