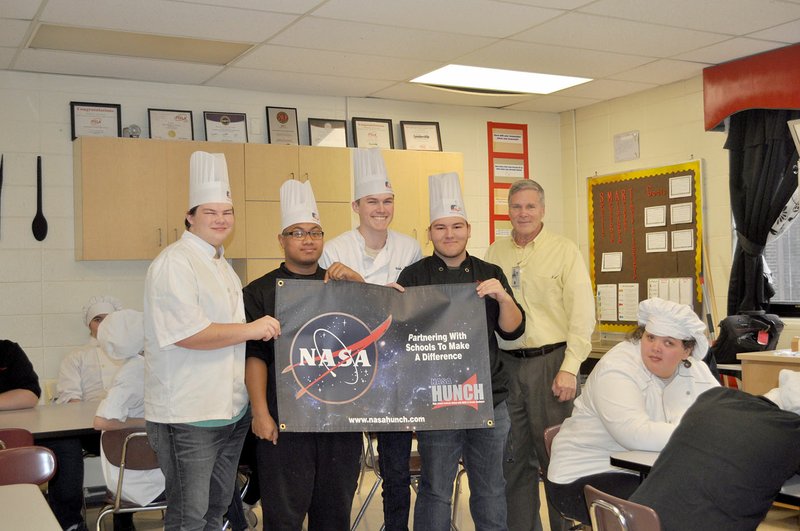 Culinary students at McDonald County High School had a visit from a NASA representative on Feb. 7.

Bob Zeek of the Marshall Space Flight Center in Huntsville, Ala., came to the school to present a banner for the students' participation in NASA's HUNCH program, which stands for High school students United with NASA to Create Hardware.

As the name suggests, through the program, NASA partners with high school students to solve problems. One aspect of the HUNCH program is the food science program, in which culinary teacher Marie Strader's class has been participating. The students are competing with 40 other schools to create a new recipe for space travel and the International Space Station.

The class started with four groups presenting four original recipes, which were all required to be ethnic dishes. They were required to follow strict nutritional guidelines because of the particular nutritional needs that astronauts have while in space. The final recipe that was chosen is called astro papa, which is a mashed potato and steak quesadilla.

Zeek said mashed potatoes are a good food for space travel because they are sticky. Crunchy foods are not good, in contrast, because they have crumbs that float around and can get in the astronauts' eyes and in the filters, he said. He said the culinary program started five years ago and it has been a major success. He said, now that the students have participated in the program, they can put NASA on their resume, which should impress colleges and employers.

The culinary class partnered with the high school physics class, to whom Zeek also presented a banner. The physics class helped by writing a paper and by testing the food for the G forces in a simulated space shuttle takeoff.

Ethan Francisco of the physics class said they took a regular cardboard box and taped it up on the outside, lined it with foam and, when they put the food in, surrounded it with pillow stuffing. They tied it to a rope and spun it, using the school resource officer's radar gun to determine the speed. When they opened the box, the food was still intact, and they knew the food would hold up to space flight, he said.

Zeek told the students NASA is on the verge of building its own rocket rather than having to use Russian rockets. He said NASA hopes to colonize the moon in order to get to Mars. He also noted the students' grandchildren could be taking tourist trips to the moon.

Strader said the students will compete for judges at Brightwater, Northwest Arkansas Community College's culinary center. After this, they could move on to compete in April in the Johnson Space Center Final Culinary Challenge.