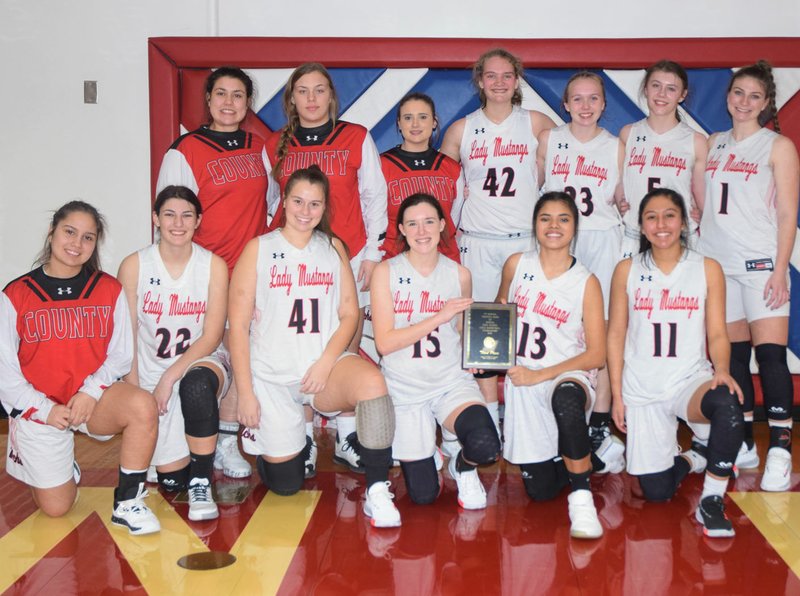 The McDonald County Lady Mustangs jumped out to a 15-2 lead and cruised to a 48-34 win over Joplin in the third-place game of the ninth annual Seneca Girls Basketball Tournament held on Feb. 8 at Seneca High School.

Rita Santillan opened the game with a three-pointer before Sydney Killion hit consecutive baskets to give McDonald County a quick 7-0 lead.

Joplin's Avery Gage scored Joplin's first two points to end the run, but the Lady Mustangs answered with eight straight points, including six straight by Kristin Penn, to put McDonald County ahead 15-2 before Madeleine Farber hit a three-pointer for Joplin to end the first quarter.

McDonald County continued to pull away in the second quarter, building a 30-8 lead after a 15-3 run to start the period.

Gage hit a pair of free throws to cut the lead to 30-10 at halftime.

McDonald County stretched the lead to 43-20 after three quarters, but Joplin opened the fourth quarter with an 11-0 run to cut the margin to 43-31.

Penn hit a pair of free throws and Santillan hit a short jumper to end Joplin's run and the Lady Eagles could get no closer than the final score of 48-34.

Santillan finished with 15 points and Samara Smith added 12 to lead McDonald County. Rounding out the scoring for the Lady Mustangs were Penn with nine points, Ragan Wilson and Killion with four each and Jaylie Sanny and Alexia Estrada two each.

"We got after them early and forced some turnovers that we converted into easy baskets," said coach Chris Kennedy. "We did a great job of moving the ball against their zone and got good shots. When we make baskets, it makes everything else so much easier. It's a great job by the girls coming here and winning two out of three games. It's a good tournament and they treat us well. We picked up some hardware and that is always a good thing."

The Lady Indians jumped out to a 13-4 lead after the first quarter before McDonald County closed to 22-17 at halftime.

McDonald County rallied from a 10-7 deficit after the first quarter to beat Purdy, 42-26, in the opening round of the tournament on Feb. 4.

McDonald County led, 14-13, at halftime before pulling away in the third quarter to take a 26-16 lead into the fourth quarter.

Smith scored 12 points and Penn 10 to lead McDonald County, followed by Killion with six points, Myers with four, Estrada and Ragan Wilson three each and Santillan and Sanny two each.

Purdy was led by Bayleigh Robbins and Annabelle Bowman with eight points each.

McDonald County improved to 7-12 heading into its Feb. 10 game at Lamar. The Lady Mustangs host Nevada on Feb. 14.

McDonald County opened the tournament with a 45-30 loss to Carthage.

McDonald County was led by Leach with 14 points, followed by Elwood with nine points, Wiseman five, Ramirez four, Horton and Munoz two each and Martinez one.