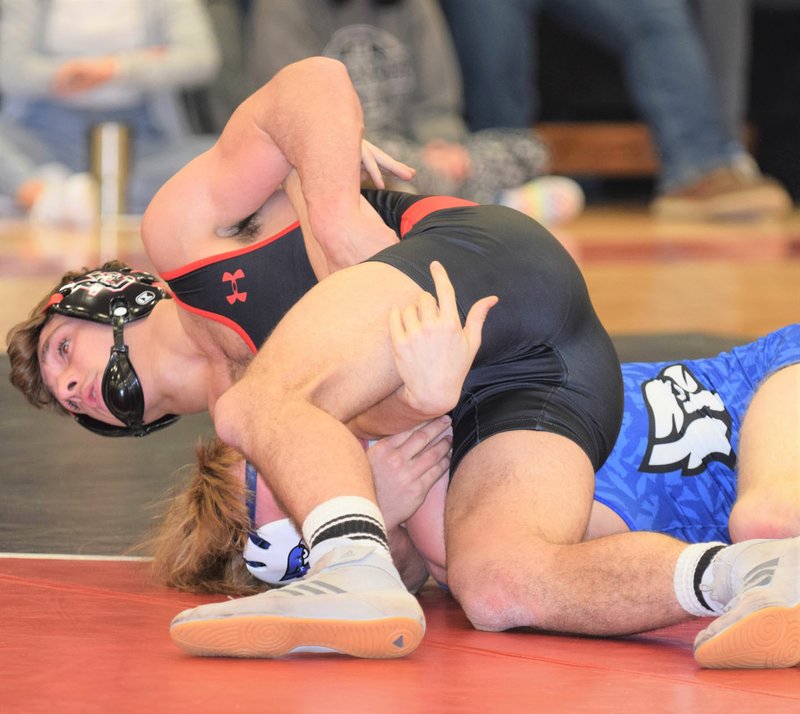 RICK PECK/SPECIAL TO MCDONALD COUNTY PRESS McDonald County's Jack Teague has Isaiah Ragsdale of Marshfield on his back on the way to a third-period pin during the Mustangs' 40-36 loss on Jan. 30 at MCHS. On Saturday, Teague won the 152-pound championship at the 2020 George Hoover Invitational on Feb. 1 at Liberty High School.

It took Jack Teague about three and a half years of his four-year high school wrestling career to win his first tournament. His second came just two weeks later and made history.

Teague won the 152-pound title at the 2020 George Hoover Invitational held on Jan. 31-Feb. 1 at Liberty High School, becoming McDonald County's first-ever winner of an individual title at the prestigious tournament in the five years McDonald county has competed at the event.

"Jack obviously had a great tournament," said coach Josh Factor. "He pinned his way through the bracket and had some great wins. He got a pin over the kid (Will Locke) from Kearney in the semifinals. It's always nice to get a win over a quality Class 3 opponent. He got into some trouble in the finals against the Fort Osage kid (Jeremiah Phillips). He had to bridge off his back but was able to bounce back and get the pin."

Teague improved his season record to 38-4.

McDonald County had two others make the finals, but both had to settle for second place.

Oscar Ortiz took second at 132 pounds. Levi Smith did the same at 120 pounds.

Ortiz won both of his pool matches by pin before winning by technical fall (17-2) over Leyton Manley of Kearney in the semifinals.

The win gave Ortiz a shot at Kyle Dutton of Liberty, the top-ranked wrestler in Class 4, in the finals.

Ortiz trailed Dutton 6-5 in the third period before electing to allow Dutton to escape to give the McDonald County senior a chance to tie the match with a takedown.

Instead, Dutton got the takedown before Ortiz escaped to make the final 9-6.

"Oscar wrestled him tough," Factor said. "It was a one-point match in the last 45 seconds. We could have taken a one-point loss, but we let Dutton up to go for the win. You always want to put your guys in a situation where they have a chance to win."

Smith had the biggest challenge of any of the Mustangs in the finals when he faced Jeremiah Reno, ranked sixth in the nation, who improved to 37-0 win the first-period pin.

"Levi had pins all the way through the tournament and then ran into Reno in the finals," Factor said. "It was a good match for Levi to have the chance to see that type of competition."

Eh Doh Say added a third at 113 pounds, winning the third-place match by pin over Marcus Wilson of Raytown South who had beaten the McDonald county senior by a 7-5 decision in a pool match.

Jordan Meador (138) and McCoy Ikosia (220) both took fifth place. Meador went 0-2 in his pool but bounced back with two pins in the consolation bracket.

Ikosia defeated Zach Olson of Kearney by pin in the fifth-place match after Olson had pinned Ikosia in a pool match.

Cross Spencer was the only other Mustang to compete. Spencer went 0-4 to take 12th place.

McDonald County closes out its regular season on Feb. 6 at Carl Junction. The Mustangs will compete in the Missouri Class 3 District 3 tournament on Feb. 13-14 at Willard High School.

Marshfield rallied for a 40-36 win over McDonald County during a special afternoon match-up on Jan. 30 in front of the MCHS student body.