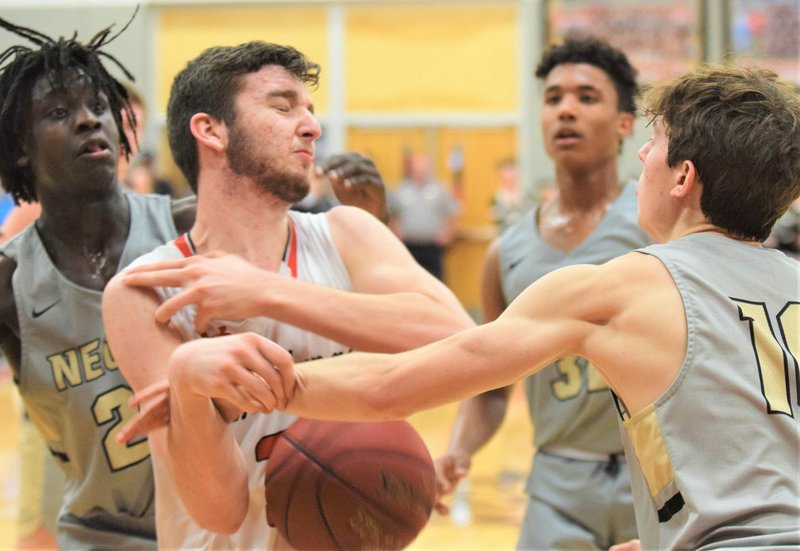 RICK PECK/SPECIAL TO MCDONALD COUNTY PRESS McDonald County's Teddy Reedybacon fights for control of the ball as Neosho's Mason Gammons (10) tries to swat it loose. Neosho's Sam Cook and Landon Austin look on during the Wildcats' 52-40 win on Jan. 31 at MCHS.

The Neosho Wildcats survived a four-minute dry spell on the way to claiming a 52-40 win in front of a standing-room-only crowd at McDonald County High School to spoil the Mustangs' 2020 homecoming.

Neosho led 16-11 at the end of the first quarter and stretched the margin to 34-18 at halftime.

The teams traded baskets in the first half of the third quarter, leaving Neosho with a 38-23 lead with about three minutes left in the period.

But the Mustangs cut the margin to 38-28 with a basket by Teddy Reedybacon and a three-pointer by Cross Dowd with just over two minutes left in the third period.

Neither team was able to score again in the third period and in the first two minutes of the fourth before Neosho's Chase Flynn hit a pair of free throws to give the Wildcats a 40-28 lead.

McDonald County got the deficit to under 10 points at 45-36 with over three minutes left, but Neosho hit six consecutive free throws down the stretch to seal the win.

"We got back to within 10 points in the second half and it stayed there for a good four minutes and we missed some opportunities that were there to cut it down more," said coach Brandon Joines. "Our offensive flow was working and functioning at that point, but we just missed some shots. In the first half, we just dug ourselves a hole at the end of the second quarter that we struggled to get out of. We played inspired in the second half and won the half, but we had too far to go. The effort was there and the energy level was there and that is what we are looking for."

Pierce Harmon scored 13 points and Dylan Allison had 12 to lead McDonald County. Rounding out the scoring for the Mustangs were Reedybacon with six points, Cade Smith four, Dowd three and Garrett Gricks two.

Neosho was led by Landon Austin with 17 points and Flynn with 15.

McDonald County falls to 5-13 overall for the season, 2-2 in conference, heading into its Feb. 4 game against Strafford. The Mustangs host East Newton on Feb. 7 in a Big 8 Conference matchup.

McDonald County claimed a 41-30 win in the junior varsity game after taking a 14-3 lead at halftime.

Gricks led the Mustangs with 12 points, followed by Dowd with 10, Colton Ruddick with nine, Eli McClain and Matthew Mora four each and Jack Parnell two.

Weston Gordon scored 15 points to lead McDonald County. Rounding out the scoring for the Mustangs were Sterling Woods with eight points, Parnell five, Dalton McClain and Jaxson Harrell three each and Isaac Behm one.

After blowing a four-point lead in the final 20 seconds of regulation, McDonald County outscored the Cassville Wildcats 7-6 in overtime to pull out a 63-62 win on Jan. 28 at MCHS.

Harmon drove around his defender for a layup to start the overtime before Smith followed with a dunk after a Mustang steal to stake the Mustangs to a quick four-point lead. After a Cassville basket, Harmon hit a short jumper and a free throw to put McDonald County up 63-58 with just over two minutes left in the overtime period.

But those would be the last Mustang points, while Cassville scored twice in the next minute to cut the McDonald County lead to 63-62 with 1:05 left.

McDonald County held the ball until Cassville was forced to foul with 28 seconds left, but the Wildcats had the chance for the win after the Mustangs missed the front end of a one-and-one.

But Cassville's D.J. White missed a long-range jumper at the buzzer to give McDonald County the win.

Reedybacon scored the Mustangs' first points of the quarter with 4:21 left to put McDonald County back up by one before Irael Marcos and Cole Martin scored to help stretch the McDonald County lead to 54-50 with 2:12 left in regulation.

White cut the lead to one when he made three free throws after he was fouled on a three-point attempt with 1:39 left.

After a McDonald County miss from the free-throw line with 54.7 seconds remaining, White hit a three-pointer with 31.5 seconds left to give the Wildcats a 56-54 lead.

But Reedybacon forced overtime when he scored from down low at the 19.9-second mark.

White missed two free throws with 11.6 seconds left, giving the Mustangs a chance to win in regulation, but McDonald County came up empty in the final 10 seconds.

Harmon finished with 19 points and Reedybacon had 16 to lead McDonald County. Rounding out the scoring for the Mustangs were Marcos with eight points, Dowd and Smith six each, Allison five and Martin three.

Cassville was led by White with 28 points.

Bo Leach scored 23 points to lead McDonald County to a 52-44 win in the junior varsity game.

Dowd added nine points, followed by Gricks with eight, Devin Swanson and Eli McClain three each and Parnell, Woods and Mora two each.

McDonald County made it a sweep with a 43-41 win in the freshman game.