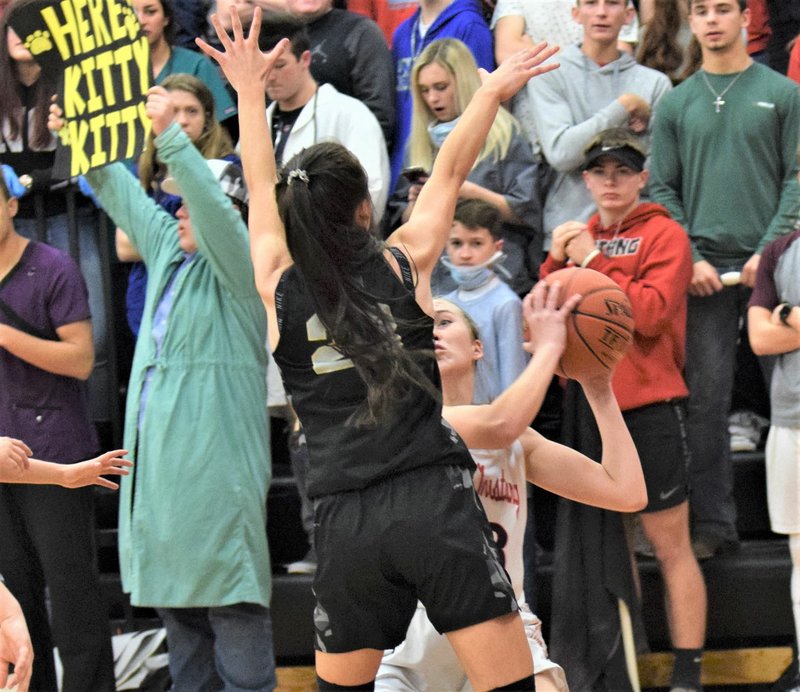 RICK PECK/SPECIAL TO MCDONALD COUNTY PRESS McDonald County's Kristin Penn got guarded up close and personal by Neosho's Olivia Hixson during the Lady Mustangs' 29-24 loss on Jan. 31 at MCHS.

After taking a 10-5 lead at the end of the first quarter, the McDonald County Lady Mustangs managed to score just 14 more points in the final three periods to drop a 29-24 decision to Neosho on Jan. 31 at MCHS.

Trailing by five at the end of the first quarter, Neosho tied the game at 10-10 with 3:49 left in the first half.

McDonald County's Ragan Wilson scored the Lady Mustangs' only two points of the second quarter with 38 seconds left in the period for a 12-10 lead.

But Neosho's Olivia Hixson hit a three-pointer before the half to give Neosho a 13-12 lead at intermission.

Laney Wilson put the Lady Mustangs up 14-13 to start the second half, but Neosho's Mary Dunbar connected on a rare four-point play for a 17-14 advantage, a lead that Neosho would not surrender the rest of the way.

Hixson added another three-pointer at the end of the third quarter to give Neosho a 23-16 lead entering the fourth period.

McDonald County held Neosho to just six points in the final eight minutes but managed to only score eight themselves to give the Lady Wildcats a 29-24 win.

Hixson finished with 13 points and Dunbar 10 to lead Neosho.

McDonald County falls to 5-11 overall, 2-3 in the Big 8 Conference, heading into this week's Seneca Tournament.

Neosho added a 41-28 win in the junior varsity game.

Trailing by 16 points after three periods, a fourth-quarter McDonald County rally came up just short as Cassville held on for a 54-49 win on Jan. 28 at MCHS.

McDonald County trailed 47-31 early in the final period but clawed its way back into the game with a 12-0 run to start the final period that cut the Cassville lead to 47-43 with 59 seconds left.

After a pair of free throws by Cassville's Mandy McCracken stretched the lead to six points, McDonald County's Ragan Wilson and Sydney Killion hit back-to-back baskets to cut the lead to 49-47 with 37.2 seconds remaining.

McCracken hit two more free throws with 32.3 seconds left and another a 9.9 seconds before Ragan Wilson made a pair of charities to get McDonald County to within 52-49 with eight seconds left.

McCracken sealed the win with her sixth and seventh free throws in the fourth quarter with 1.3 seconds left.

Kristin Penn scored 16 points and Killion added 15 to lead McDonald County. Rounding out the scoring for the Lady Mustangs were Ragan Wilson with eight points, Laney Wilson with six and Sanny with four.

Cassville was led by McCracken with 27 points.

McDonald County claimed a 36-35 win in the junior varsity game. Myers scored 16 points, including two free throws with 5.5 seconds left to give McDonald County the win, to lead the Lady Mustangs. Leach added seven points, followed by Smith and Abby Wiseman with four each, Ramirez and Martinez two each and Sosha Howard one.