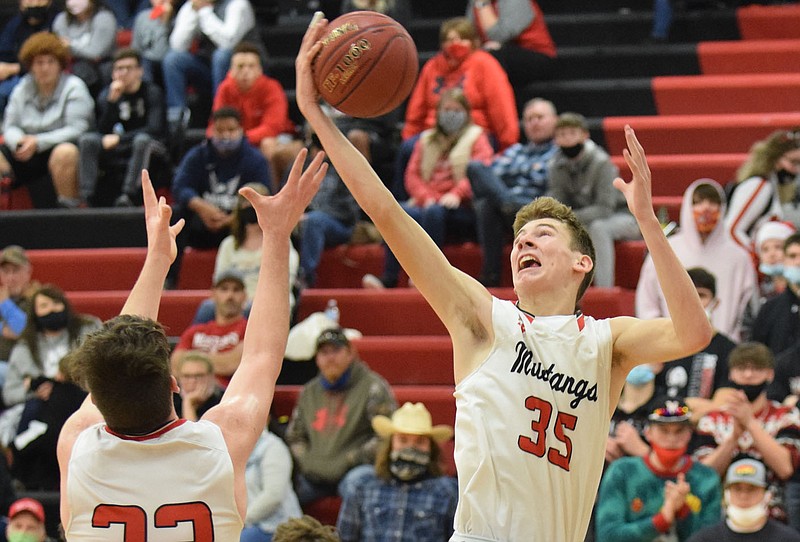 The lead changed for the third time in the fourth quarter when sophomore Sterling Woods hit a three-pointer to give McDonald County a 43-42 lead with 2:49 left.

But Neosho's Landon Austin hit a jumper with 2:16 remaining to put the Wildcats up for good before adding three free throws in the next two minutes to help Neosho seal the win. Chase Flynn added a free throw with .09 seconds left for the final point of the game.

"All of a sudden at the end of the game, we stopped using our post guys," said coach Brandon Joines. "They went to a zone and we decided we were going to start chucking. Once we started doing that, we gave them the lead and it was hard to come back from that."

McDonald County jumped out to an 8-4 lead in the first quarter, but Austin's buzzer beater -- an indication of things to come -- to end the first quarter gave Neosho a 17-15 lead to begin the second quarter.

"We started out pretty well," Joines said. "I thought we were playing pretty decent to start the game. I was happy with our execution. We took advantage of where we had an advantage and that was in our post play."

The Wildcats opened the second quarter with a 10-2 run to stretch the lead to 17-17 before Garrett Gricks hit three free throws to apparently cut the lead to a 27-20 lead at halftime. But Austin's desperation shot at the buzzer from about 50 feet found the bottom of the net to put Neosho on top, 30-20, after three quarters.

"We got sloppy with the ball in the second quarter," Joines said. "We let them have some easy buckets. They got the three at the end of the half, but it was not a game-changing play. It did not change the momentum and we proved that in the third quarter."

McDonald County opened the second half with a 9-0 run before Austin's jumper broke the drought for Neosho with 4:35 left in the quarter.

Baskets by Gricks and Pierce Harmon gave McDonald County its first lead since the first quarter at 33-32 with 3:45 left in the period.

The lead changed hands four times and was tied at 37-37 when Flynn stole a pass and dribbled the length of the floor for a layup at the buzzer to give Neosho a 39-37 lead entering the fourth quarter.

"We got back to executing in the third quarter," Joines said. "We got the ball to the post -- our biggest advantage -- and we used them."

Cross Dowd opened the fourth quarter with a three-pointer to put the Mustangs up, but the Wildcats took a 42-40 lead on a basket by Isaiah Green and Austin's free throw.

Woods hit a three with 2:49 left to give McDonald County its final lead at 43-42 before Neosho closed out the game with a 6-0 run.

"No disrespect to them, but we are in my opinion the better team," Joines said. "We just have to come out and prove it because we did not finish and prove it tonight. That's frustrating and disappointing because I know what we are capable of."

Harmon finished with 10 points to lead a balanced McDonald County scoring attack. Dowd added nine points, while Gricks and Teddy Reedybacon had seven each and Woods and Cole Martin had five each.

McDonald County falls to 1-2 entering its Dec. 15 game against Webb City. The Mustangs travel to Carthage on Dec. 17 and to Gravette (Ark.) on Dec. 18.

McDonald County claimed a 45-31 win in the junior varsity game behind 20 points from Dalton McClain. Rounding out the scoring for the Mustangs were Isaac Behm with seven points, Levi Malone and Weston Gordon with five each, Destyn Dowd four and Jaxson Harrell two.

McDonald County picked up its first win of the season with a 64-58 win over Pea Ridge on Dec. 8 at Pea Ridge High School.

McDonald County trailed 14-11 after the first period, 31-27 at halftime and 46-39 after three quarters before outscoring the Blackhawks 25-12 in the fourth quarter to pull out the win.

"Anytime you can come to Pea Ridge against a very good, well-coached, disciplined team and get a win is a wonderful moment," Joines said. "We fought back after we got down a little bit. We showed some grit. We showed some heart. Overall, it was a solid effort. We utilized our posts pretty well. All around, just a great job of fighting and not getting pushed around."

Cross Dowd led the Mustangs in double figures with 19 points. Harmon added 13 points and Martin 10 followed by Woods, Reedybacon and Gricks with six each and Eli McClain with four.

The Mustangs added a 26-25 win in the junior varsity game.

Dalton McClain had 13 points to lead the Mustangs, followed by Gordon with five points, Levi Malone and Sam Barton three each and Josh Pacheco with two. 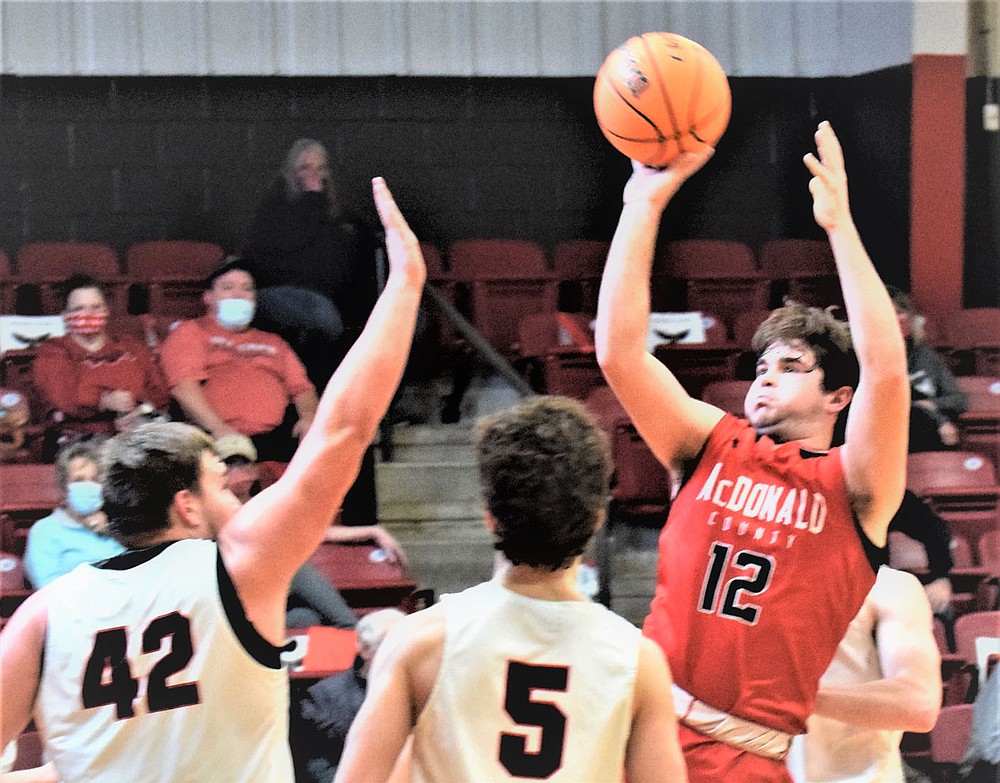