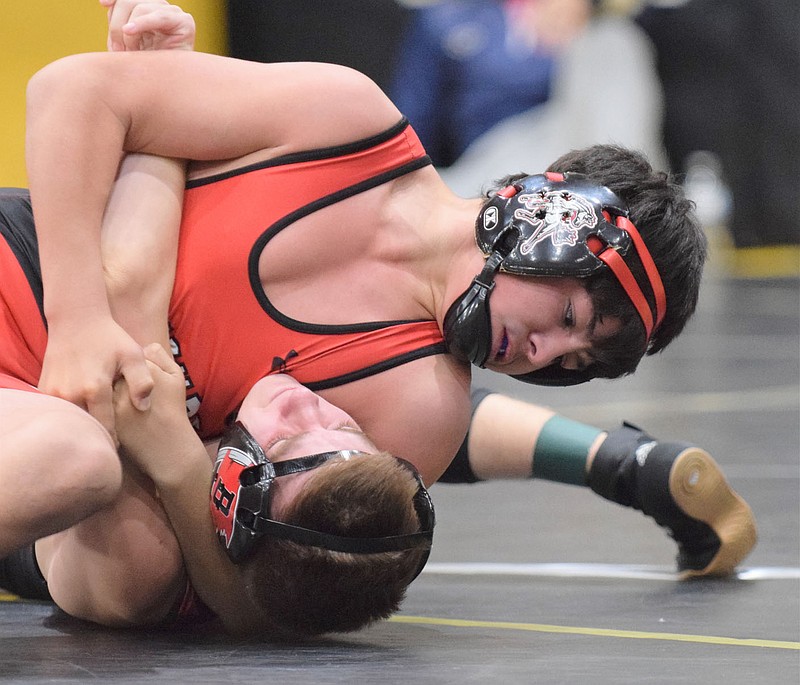 RICK PECK/SPECIAL TO MCDONALD COUNTY PRESS McDonald County's Blaine Ortiz pins Eli Stein in the semifinals of the Neosho Wrestling tournament on his way to the finals where he claimed a 10-4 decision over Talan Braswell of Springdale Har-Ber for the title.

Ortiz, a 120-pound sophomore, went 9-0 in the first week of the season, including a 10-4 decision over Talan Braswell of Springdale Har-Ber in the championship match of the Neosho Wrestling Tournament.

Ortiz advanced to the championship match with three wins by pin in pool play and another against Eli Stein of Branson in the semifinals.

All four of Ortiz's pins came in the first period. Only Braswell was able to avoid getting pinned, but all four of his points came when Ortiz let him up for an escape in order to score another takedown.

"Blaine had a great tournament, capturing his first tournament championship of his high school career," said coach Josh Factor. "Blaine has proven he has the potential to be a contender in this year's season for a state medal. We just need to be hopeful that the opportunity is there come February. In the meantime, training will be key to his preparation to get there."

Fellow sophomore Levi Smith (8-1) and freshman Sam Murphy (8-1) sustained their first losses of the season in the tournament finals.

Smith lost a 9-2 decision to Drew Felker of Farmington in the title match. The 138-pound sophomore won three of his first four matches by pin, including one in the second period over Nate Copeland of Neosho in the semifinals.

Murphy (220) won all three of his pool matches by pin before claiming an 8-3 decision over Corey Choates of Springfield Kickapoo in the semifinals.

In the finals, Murphy was pinned with 41 seconds left in the first period by Jeremiah Lawson of Neosho.

"Levi Smith had a great tournament, despite losing by decision in his finals match to a returning state qualifier," Factor said. "Levi is continuing to improve as a wrestler in our program. He just needs to work on taking more shots on quality opponents. Our last but not least finalist was Sam Murphy, who is just a freshman. He showed a lot of promise by reaching the finals where he faced last year's 182-pound state champion. Sam did a great job competing in his first high school tournament and learned a lot from the experience. To reach the finals of this tournament as a freshman is a great accomplishment and we're looking forward to seeing where he goes from here."

McDonald County's only other medal came from Colter Vick, a 152-pound sophomore. Vick went 2-1 in pool matches to advance to the championship bracket where he lost by pin to Collyn Kivett of Neosho to knock him into the third-place match.

In that match, Vick pinned Joshua Puente of Bentonville West in the first period for third place.

"Colter is continuing to improve every time he steps on the mat and had a breakthrough day by earning his first medal at a varsity tournament," Factor said.

"Looking at this year's team, we are very young and lack the experience of competing at the state tournament, but we proved we can compete with the best," Factor said. "It was just great seeing our athletes compete on the mat. Now we just have to be hopeful that our season will continue through February."

McDonald County faced Rogers High and Rogers Heritage in a double dual at Seneca on Dec. 1 to open the season. Rogers claimed a 48-31 win in the first match.

McDonald County received wins by pin from Ortiz, Cooper and Vick. Winning decisions were Smith (14-2) and Murphy (2-0), while Owens won by forfeit.

McDonald County split a pair of duels at Seneca on Dec. 3 at Seneca.

Against Seneca, pins by Oritz and Murphy and a forfeit to Smith accounted for the Mustang points. In the win over Diamond, McDonald County received pins by Lopez, Owens, Smith and Murphy. Forfeit wins went to Ortiz, Cooper, Cross Spencer, Vick, and Gardner.

The girls' team won two matches against Nixa on Dec. 1 at Seneca.

Gisel Aragon won with a first-period pin and Stacy Lopez won by forfeit.

Against Seneca, Aragon won by pin, while Jaslyn Benhumea won by forfeit.

In the second match of the season against Seneca, Aragon won by pin and Benhumea won by forfeit. 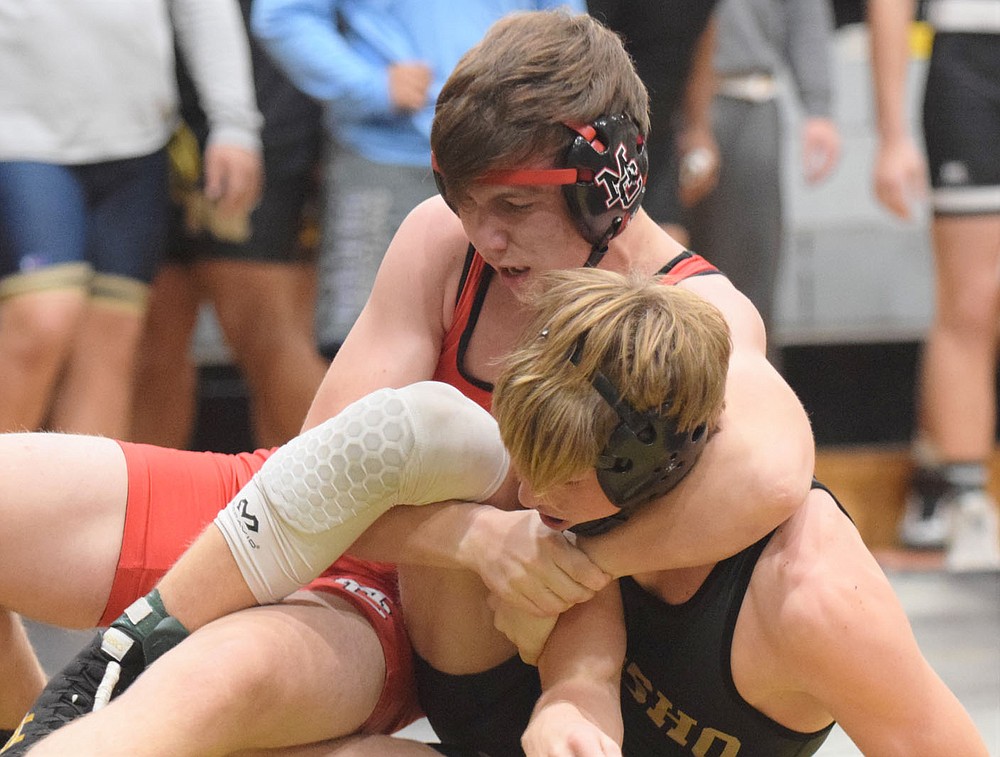 RICK PECK/SPECIAL TO MCDONALD COUNTY PRESS McDonald County's Colter Vick battles Collyn Kivett of Neosho in the semifinals of the Neosho Holiday Tournament. Kivett won the match by a pin, but Vick came back to win third place with a pin over Joshua Puente of Bentonville West.
ADVERTISEMENT