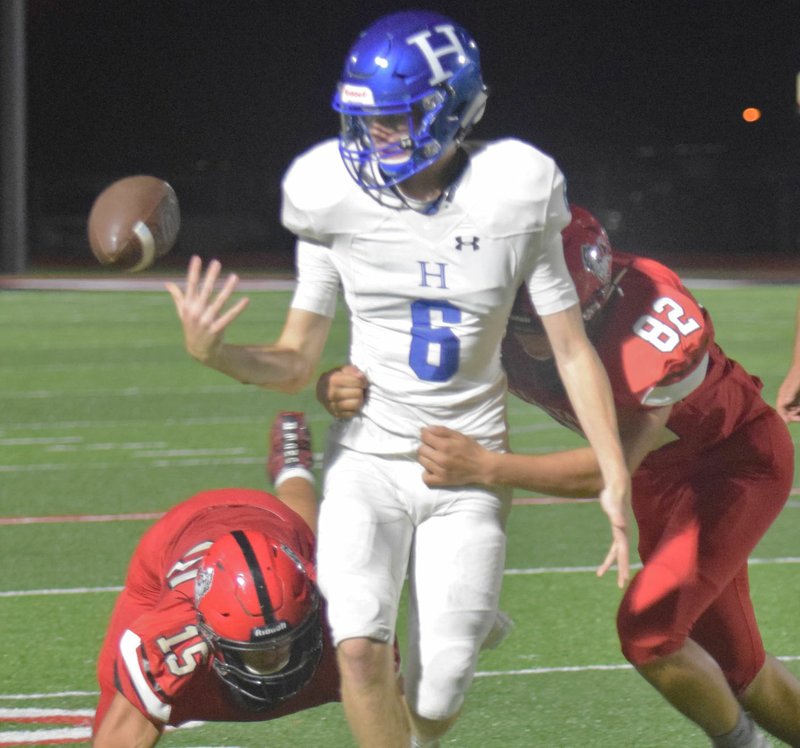 RICK PECK/SPECIAL TO MCDONALD COUNTY PRESS McDonald County's Jack Teague (15) and Jackson Clarkson (82) force the ball loose while tackling Hollister quarterback Layton Morgan only to have it land in Morgan's lap when he hits the ground. Hollister beat the Mustangs, 20-6, on Sept. 20 at MCHS.

The Hollister Tigers built a 20-0 lead midway through the third period and then held on over the final 18 minutes to claim a 20-6 win over McDonald County High School on Sept. 20 at MCHS.

"They kind of go by the three yards and a cloud of dust mentality and that means a lot of third downs and, if you get a first, you keep driving," coach Kellen Hoover said. "Our defense played well. We played hard. They were a lot of good hits, but they seemed to get just enough when they needed to. We didn't do a good enough job of hanging onto the ball offensively. To me, we (offense) let our defense down tonight. We have to be better offensively."

The wind and kicking game also played a big part in the result -- right from the opening kickoff.

Kicking with a strong south wind, Hollister pinned the Mustangs down on their own 12-yard line to start the game. After picking up one first down, McDonald County was forced to punt, with Hollister taking over on its own 49.

It took the Tigers eight plays to cover the 51 yards, with Cody Johnson running for a four-yard touchdown to cap off the drive with 6:01 left in the first quarter. Clay Humbyrd's PAT gave Hollister an early 7-0 lead.

The teams traded punts on their next possessions, but Hollister used a 57-yard punt to again force McDonald County to start from its own 12.

After netting only two yards in three plays, the Mustang's punt from near its own end zone was only good for 11 yards with Hollister taking over on the McDonald County 16 yard line.

It took the Tigers six plays, including converting a fourth and one, to make the score 13-0 -- Kelby Gard's one-yard run with 10-22 left in the half.

McDonald County dominated the second quarter, but both came up empty on both of its drives. A penalty negated Cole Martin's 53-yard touchdown to Junior Teriek on the first drive before a fumble gave Hollister the ball at midfield.

The Mustangs' defense forced a punt with McDonald County taking over on its own 28-yard line.

McDonald County drove the length of the field only to come inches short after Teriek was stopped for a Hollister three-yard line on fourth down with 6.9 seconds left in the first half.

Hollister opened the second half with an 11-play, 69-yard touchdown drive that gave the Tigers' a 20-0 lead with 6:15 left in the third quarter.

While Hollister used nearly six minutes to go 69 yards, it took McDonald County lest than 10 seconds. On the first play from scrimmage following the ensuing kickoff, Martin hit Levi Malone with a 69-yard touchdown pass to cut the lead to 20-6 with 5:54 remaining in the third quarter.

But the Mustangs could get no closer.

Hollister went on a 16-play drive that ate up over eight minutes before stalling on the McDonald County 26 yard line with nine minutes left in the game.

"It's a game of inches -- it really is," Hoover said of his team's missed opportunities. "We were probably a half yard off the line of scrimmage (on the touchdown pass that was called back). That's putting it in the official's hands and not making it obvious where we are. That's the stuff that will come back and get you. The one in the end zone -- did he score or did he not -- I'm not at liberty to say because I didn't have as good a view as the official. It truly is a game of inches and we didn't get enough of those inches tonight. We have to be more consistent in our execution. We had a lot of plays tonight that looked really good except one guy didn't do his job for one reason or another."

Teriek finished with 65 yards on 14 carries (all in the first half) to lead the McDonald County ground game. Martin completed 11 of 18 passes for 128 yards. Malone caught three passes for 89 yards, while Teriek (14 yards), Junior Eliam (10 yards) and Trent Alik (seven yards) all caught two passes.

Michael Williams had 13 tackles (seven solo), and Levi Helm had 10 (seven solo) to lead the defense.