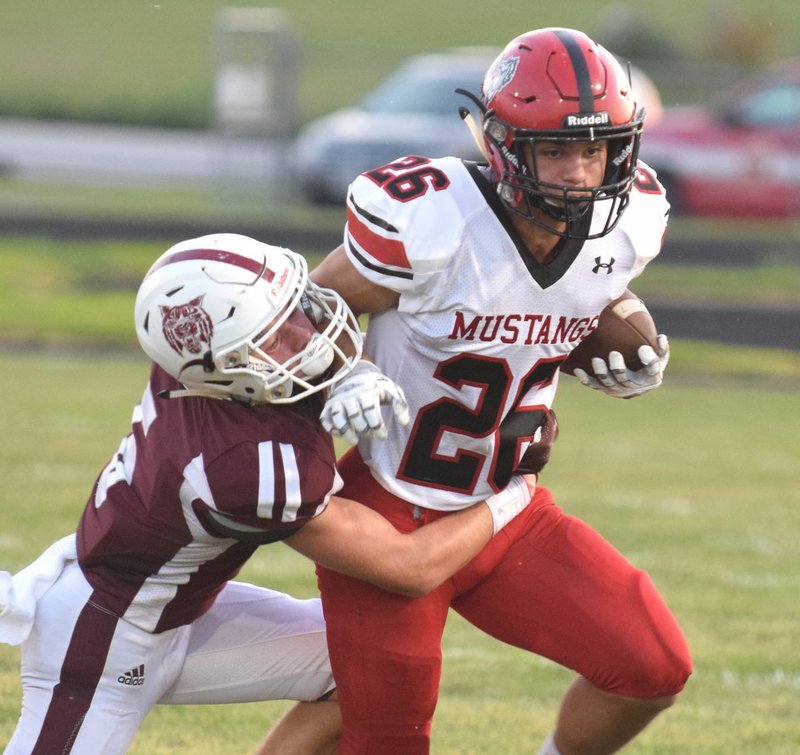 Logan-Rogersville scored four touchdowns in the first 16 minutes of the game to build a 27-0 lead and went on to claim a 53-20 win on Sept. 6 over McDonald County at Logan-Rogersville High School.

"We can't come out and dig ourselves a hole like that and expect to win," said coach Kellen Hoover. "We have to find a way to fix that. It's kind of becoming a trend to where it's becoming concerning. It starts with me on how I get these kids ready on game day, so I am going to have to look at how I do that and we will have to reflect on that a little bit. Plain and simple, you just can't come out like that against a team that can do some dangerous things on offense."

Logan-Rogersville took the opening kickoff and marched 83 yards in 11 plays to take a 7-0 lead with 7:47 left in the first quarter. Quarterback Zach Bergmann capped the drive with a one-yard run before Austin Revels kicked the PAT. Bergmann keyed the drive with a 41-yard run on third and three from the Wildcats' own 24-yard line.

McDonald County went three and out but took over possession when Junior Eliam recovered a Logan-Rogersville fumble on the Wildcat 38-yard line. Again the Mustangs were stopped on three downs with Logan-Rogersville taking over at its own 16-yard line after an 18-yard punt.

It just took five plays for the Wildcats to cover the 84 yards, the final 76 coming on a Bergmann to A.J.Craft touchdown pass to give Logan-Rogersville a 14-0 lead with 2:14 left in the first quarter.

The Wildcats made it 20-0 a minute later when Brooks Wilson scored on a one-yard run. The touchdown was set up by an interception by Gage Meadors, who returned the pick 35 yards to the McDonald County one-yard line.

McDonald County took the ensuing kickoff and put together a nine-play drive into Wildcat territory only to see it come to an end on a fumbled handoff.

Bergmann then hit Craft for 36 yards before running the final 31 yards for a touchdown to give the Wildcats a 27-0 lead with 7:51 left in the first half.

But the Mustangs' offense came alive in the final seven minutes to cut the lead to 27-13 at halftime.

Sophomore quarterback Cole Martin capped a seven-play drive with a one-yard touchdown run to cut the lead to 27-7 with 4:23 left in the half after Jared Mora kicked the PAT. Martin hit Michael Williams for 31 yards and Jack Teague for 11 to set up the score.

After forcing the Wildcats to punt, McDonald County went 68 yards six plays before Teague scored from three yards out with 43.8 seconds left in the half to cut the lead to 27-13. Martin and Williams connected for 49 and six yards before Teague ran the final 13 yards, including a three-yard TD.

Logan-Rogersville used over five of those minutes on a 10-play, 76-yard touchdown drive and then closed out the scoring on a 13-yard fumble return for a touchdown by defensive lineman Calvin Chainey on the Mustangs' next possession.

"We got a little bit of momentum before half and then it just became an issue of a job here and a job there that didn't get executed in the second half," Hoover said. "One guy not doing his job can affect the whole play and that happened several times tonight. We have to shore it up and we have to get better. We committed way too many turnovers tonight to win."

McDonald County falls to 0-2 heading into its Sept. 13 game against East Newton in the Big 8 Conference West Division opener. McDonald County will hold its annual homecoming ceremonies prior to the 7 p.m. kickoff.