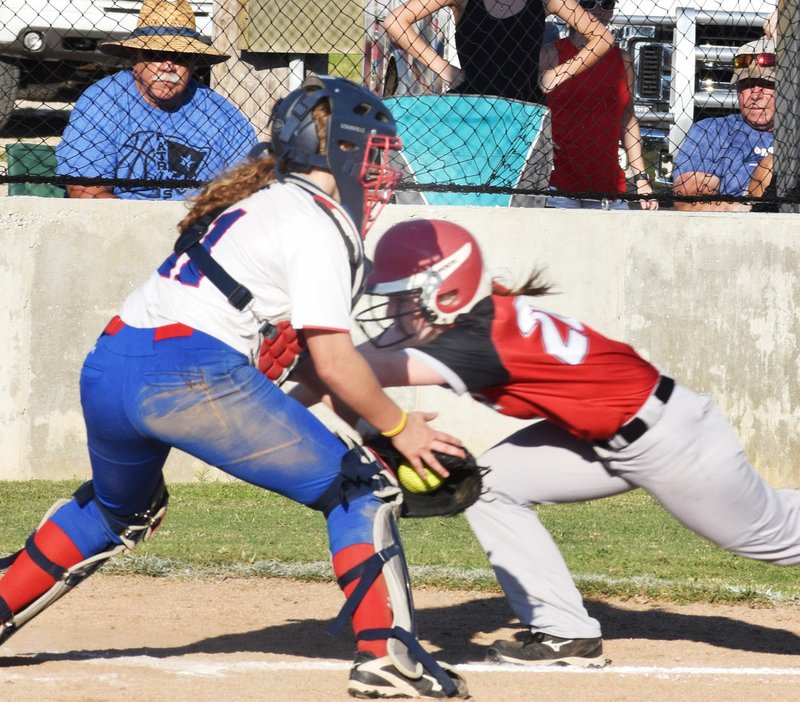 RICK PECK/SPECIAL TO MCDONALD COUNTY PRESS McDonald County's Caitlin Hall gets tagged out at home during the Lady Mustangs' 5-1 win over East Newton on Sept. 3 at MCHS.

The McDonald County High School softball team won district championships in 2016 and 2018 only to be beaten by Ozark (2016) and Bolivar (2018) in the sectional round of the state playoffs.

On Saturday, the Lady Mustangs avenged both of those losses by sweeping a doubleheader against the Lady Tigers and Lady Liberators at Bolivar High School.

McDonald County opened the day with a 5-2 win over Ozark behind the pitching of Madeline McCall and the hitting of Whitney Kinser.

McCall allowed two runs on six hits while striking out seven. Kinser had two hits, a double and a three-run homer to key the Lady Mustangs' second inning when McDonald County scored all five of its runs.

Trailing 1-0, Jackie Grider walked to lead off the inning. Adaysn Leach sacrificed before Rita Santillan lined out and Kristine Cornell reached on an error bringing up Kinser. The senior third baseman blasted her first homer of the season to give McDonald County a 3-1 lead.

Freshman catcher Reagan Myrick followed with a single before a pair of errors and a hit by Kaylee Eberley accounted for two more runs.

In addition to Kinser's two hits, Santillan, Cornell, Myrick, McCall and Eberley had one hit each.

McDonald County trailed 2-0 and 4-2 against Bolivar before rallying for a 5-4 win.

Alexa Hopkins went five innings for the win before McCall got the save with a pair of scoreless innings. Hopkins allowed four runs on eight hits, while McCall gave up one hit in her two innings of work.

Trailing 2-0 after the first inning, McDonald County tied the game in the top of the second. Hopkins singled and McCall was hit by a pitch before Eberley bunted to put runners on second and third. Grider drove in one run with a grounder, with a second run scoring on an error.

Bolivar regained its two-run lead in the bottom of the inning, but the Lady Mustangs used the long ball to tie the game. Cornell walked to lead off the inning but was still at first with two out when Hopkins came to the plate. The junior pitcher helped her own cause with a two-run homer to tie the game.

McDonald County scored what turned out to be the winning run in the third. Grider reached on an error with one out to start the winning rally. Santillan walked to put runners on first and second before Cornell singled in the winning run.

McDonald County was held to five hits, two each by Hopkins and Santillan and one by Cornell.

Bolivar was led by junior pitcher/shortstop Katie Brooks. The Florida State commit had one hit and scored two runs before retiring six of the seven hitters she faced in relief of Jaydn Hamilton. Second-team all-state outfielder Emme Hall was held to one hit in four at-bats.

"Lex (Hopkins) and Mo (McCall) both threw well," said coach Skyler Rawlins. "Mo came in and shut the door on Bolivar. We beat a couple of good teams today. Lex and Whitney had the homers, but we had some big hits up and down the lineup."

After a 40-minute delay due to the heat, the Lady Mustangs took no time to hand Marshfield a 15-1 loss on Sept. 6 at Marshfield High School.

Hopkins got the win, allowing one run on two hits while striking out six and walking two in five innings.

Tied 1-1 after the first inning, McDonald County scored five runs in the second to take a 6-1 lead. The Lady Mustangs added six runs in the fourth and three in the fifth.

Hopkins had three hits to lead the offense. Kinser and Eberley had two each and Santillan and Grider both had one.

McCall allowed one run on five hits while striking out 13 to lead McDonald County to a 5-1 win over East Newton on Sept. 3 at MCHS.

McDonald County scored a pair of runs in the first and three in the fifth to take a 5-0 lead before the Lady Patriots scored their only run in the sixth.

McCall and Myrick each had two hits to lead the offense, while Santillan, Kinser and Hopkins all had one.

Hopkins threw a one-hitter to lead McDonald County to its sixth straight win to start the season in a 9-1 victory over Joplin on Sept. 9 at MCHS. She struck out seven, walked one and allowed only an unearned run.

Joplin took a 1-0 lead in the top of third on two errors, a fielder's choice and a sacrifice fly.

McDonald county tied the game in the bottom half of the inning on doubles by Leach and Santillan.

The Lady Mustangs took a 2-1 lead in the fifth on a walk, a ground out and an RBI single by Emily Emmert.

McDonald County put the game away with seven runs in the sixth inning. Singles by Kinser, Eberley, Grider, Leach, Emmert and Cornell and a double Santillan keyed the big inning.

Santillan, Leach and Emmert finished with two hits each. Cornell, Kinser, Eberley and Grider added one each.

McDonald County put its 6-0 record on the line on Sept. 10 when it hosted Reeds Spring. The Lady Mustangs travel to Aurora on Sept. 12.