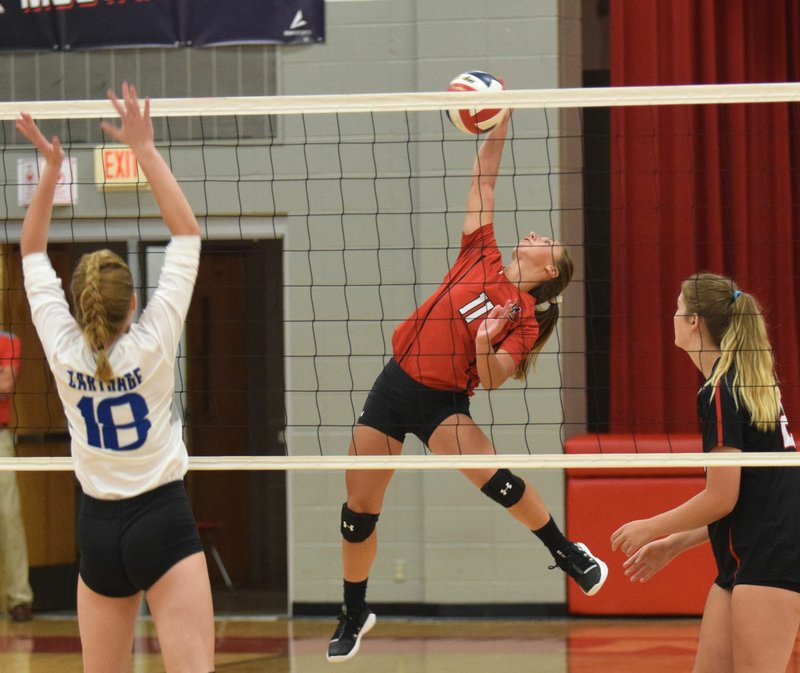 Diamond scored eight consecutive points against the McDonald County High School volleyball team late in the third game to pull out a 25-23 win in the rubber game of a three-set match held Sept. 5 at MCHS.

Diamond won the first game of the match, 25-12, before McDonald County claimed a 25-23 win in the second to force the third and deciding game.

Diamond jumped out to an 11-3 lead in the first game of the match before the teams traded points until Diamond turned an 18-10 lead into a 25-12 win.

In the second game, Diamond scored the first six points of the set before McDonald County was able to cut the lead to 12-10. Trailing 14-10, the Lady Mustangs reeled off seven straight points behind the serving of Erin Cooper for a 17-14 lead.

Diamond rallied to a 20-17 lead, but McDonald County scored eight of the next 11 points for the win.

Diamond led 10-8 in the third game before scoring four consecutive points to take a 14-8 lead. But reserve Rylee Bradley came off the bench to serve eight straight points to give McDonald County a 16-14 lead.

McDonald County stretched the lead to 18-15, but Diamond answered with eight consecutive points for a 23-18 lead. The teams traded points before McDonald County scored four straight points to stave off four match points, but Diamond was able to convert its fifth for a 25-23 win.

Adyson Sanny had 14 kills and Katelyn Ferdig had 12 to lead McDonald County. Kaycee Factor had 32 assists. Cooper finished with 30 assists.

"Our first set against Carthage on Tuesday, and tonight against Diamond we really got off to a slow start," said coach Logan Grab. "We came back strong in the second set in both matches, but we came up a little short against Carthage. We really competed well against them. They have a lot of strong hitters and we were pretty scrappy. We beat Diamond in the second but, in the third, it went back and forth and we just came up short. We made some errors at the end that cost us. We just weren't able to put the ball away when we needed to."

In the second game, Carthage appeared to be on its way to a second easy win by jumping out to a 12-5 lead, but the Lady Mustangs scored nine of the next 10 points behind the serving of Grace Poland and Shye Hardin to take a 14-13 lead.

The teams traded points until Carthage broke a 21-21 tie with four consecutive points for a 25-21 win.

Ferdig had five kills and Factor had 16 digs, while Cooper had 10 assists and three blocks.

McDonald County, 0-2 for the season, hosted Joplin on Sept. 10, before traveling to Webb City on Sept. 12.