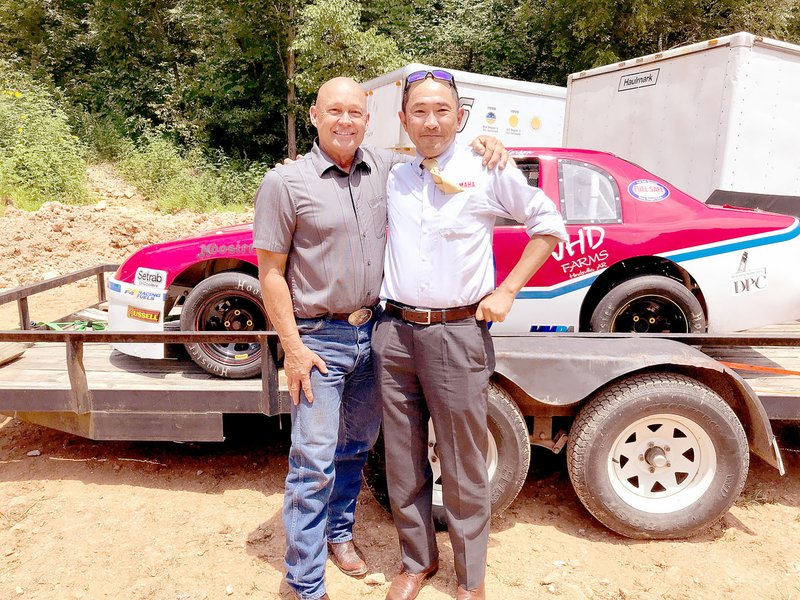 PHOTO SUBMITTED Mark Bartley (left) is pictured with Hanabusa "Kaz" Kazuomi of Yamaha. The senior Yamaha representative came to visit Bartley's racing business in Anderson and to discuss supplying engines for the business.

Bartley Racing Enterprises LLC builds Baby Grand cars, which are two-thirds the size of a full-scale race car. They are from the Grand National Stock Car Series of the 1970s and 1980s.

Bartley bought the business in January 2013 after returning from deployment in Afghanistan. He traveled to Bowling Green, Ky., to get all the parts and equipment.

The cars have 1300 cc Yamaha motorcycle engines in them. Hanabusa "Kaz" Kazuomi, a representative with Yamaha, was in the U.S. visiting with several companies, including Bartley's. He was in Anderson to talk about how to supply new crate engines for the cars. Yamaha is discontinuing the engines, so "Kaz" was there to talk about options. Yamaha is the only company that supplies the crate engines for the race car series, Bartley said. He said he has engines he can use for about five years, but looking forward, he needs an engine platform.

The cars run strictly on asphalt. They are so versatile that they are used not only in circle track but also in road racing, he said. They will outrun some of the high-class, high-dollar cars, he said.

"These are the fastest out there because of the engineering of the chassis, suspension, the light weight and the power of the engine," he said.

He noted theoretically they can go 155 miles per hour, and he has had his up to 130.

Bartley and his staff are always looking for new equipment, such as water-cooled cylinders to help cool the engine.

A new body style he is working on is based on a new Camaro body. He has kits to do Mustangs and Challengers as well, he said.

"Everyone can relate to their brand, whether Ford, Chevy or Dodge," he said.

He has 70 acres on the property where his shop is located. He said he is looking at building a dirt track. Why build a dirt track if the cars only run on asphalt?

"Well, one thing at a time," he said. "They can still run on dirt, but it's a different suspension setup."

"Everything on it is different," he said.

Bartley sponsors drivers and drives himself and leases and rents cars. He has raced himself, as far away as Calgary, Alberta, Canada.

He said Baby Grand cars are a racing platform for young, promising kids who have raced in go-carts to prove themselves. It gives them a chance to learn the rules and move up to a bigger class, he said. Some NASCAR drivers drove Baby Grand cars before making it big, he added.

"It just gives the kids an opportunity to learn. It's a stepping stone in that progression. That progression includes learning the track, track etiquette."

Bartley said of his business, "It's not a business I'm going to get rich at. It's a passion. It's more than a hobby."