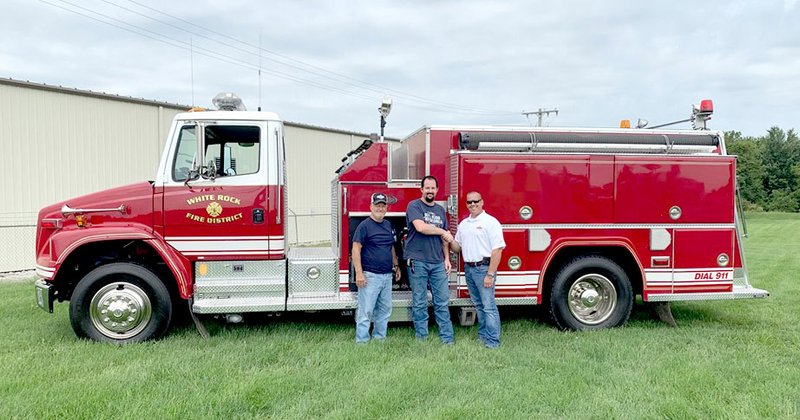 Photo submitted White Rock Fire Chief Joe Lahr (left) and firefighter Fred Parker are congratulated by a Fire Master Fire Equipment staff member upon the department's recent acquisition. The White Rock Fire Department purchased a 2002 diesel model last week to help provide better service for the community. The fire truck, acquired through Fire Master Fire Equipment Inc. in Springfield, will improve the department's fleet. This engine, along with two other diesel fire trucks, will help the department run more efficiently. An older fourth fire truck is a 1977 model, which is not diesel powered.

The diesel-powered engine provides additional options for the department, including a dump tank. Together, this engine -- with two existing fire trucks -- can carry several thousand gallons to a fire, said Dan Moore, White Rock Fire Department board of directors chairman. "It enhances our capacity. The 1,500 pump allows us to pump more water. The fire truck also has a dump tank, which can help with shuttling water," he said. "It gives us another 1,000 gallons."

The 2002 fire truck's cab is large enough for three firefighters, which means an additional firefighter can travel to a fire, he said.

The fire truck offers better backup options for the department. The oldest engine in the fleet is a gas-powered, 1977 model.

The 2002 fire engine was acquired through Fire Master Fire Equipment Inc. in Springfield. Department officials financed the truck, which is currently being equipped and will be in the Jane Days parade, Lahr said.

The new fire truck will be at Fire Station No. 1 in Jane. Officials will place the other two at Station No. 2, which is located near highways 90 and E.

Firefighting volunteers respond to emergencies and non-emergencies in a 90 square mile coverage area.

With improving efficiency, the department needs more volunteers. The department has several young volunteers but needs to increase its numbers. Lahr said he knows it's difficult to work full-time, raise a family and volunteer.

Lahr and Moore -- along with other volunteers -- usually handle medical calls and respond to accidents during the day. Younger, working folks usually volunteer to respond to calls in the evening, Lahr said.

Volunteers also are gearing up to sell smoked chicken all day on Sept. 26 and 27 at the fire station in anticipation of Jane Days on Saturday, Sept. 28. On that morning, volunteers plan to host a pancake breakfast from 6 a.m. to 9 a.m. during Jane Days.

Other plans include possibly hosting a chili supper in the fall and a spaghetti dinner in the spring.

Helping others with better equipment and volunteerism is all part of the day.