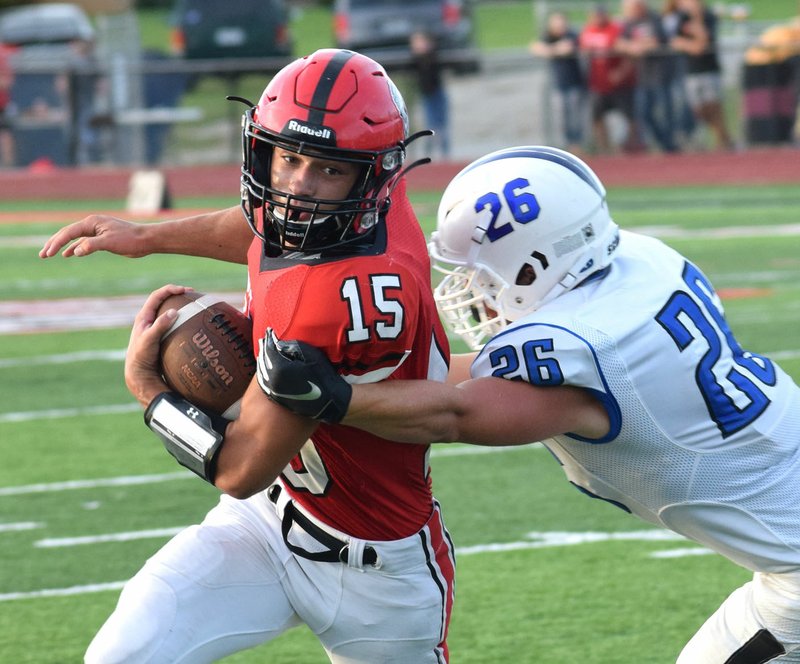 Marshfield rallied from a 14-12 deficit midway through the third period with 19 unanswered points for a 31-14 win over McDonald County on the opening night of Missouri high school football on Aug. 31 at MCHS.

"We just didn't execute like it takes to win a ball game," said coach Kellen Hoover. "We all just have to get a week better. Coaches and players made week one mistakes and we had better not turn those into repeat mistakes for week two. That is something we will work on all week at practice."

McDonald County erased a 12-7 Marshfield halftime lead on its first possession of the second half. The Mustangs marched 76 yards in six plays with Jack Teague scoring his second touchdown on a four-yard run. Jared Mora's extra point gave McDonald County a 14-12 lead with 10:22 left in the third quarter.

Junior Teriek keyed the drive with a 51-yard run on the first play of their second half. Cole Martin then ran for eight yards and, when Marshfield was called for a face mask penalty on the play, the Mustangs had a first and goal from the nine-yard line.

Teague then ran around the right end for an apparent touchdown, but the play was called back on a holding penalty. Martin then hit Michael Williams for nine yards to move the ball to the four, setting up Teague's TD.

But Marshfield answered on its next possession. The Blue Jays went 78 yards in six plays with quarterback Brennan Espy hitting Thomas McIllwain with a 35-yard touchdown pass after Espy was nearly sacked for a loss before escaping to throw a strike to a wide-open McIllwain in the end zone.

The teams traded punts to close out the third quarter before Marshfield took over on their own 43-yard line after a 13-yard McDonald County punt on the first play of the fourth quarter.

Marshfield used a pass interference penalty to help the Tigers cover the 57 yards in five plays, with Espy running the final seven yards for the touchdown to give the Blue Jays a 24-14 lead with 9:58 left in the game.

Forced to punt from their own 29-yard line, the Mustangs' rolling punt was picked up by Brooks Espy on the Marshfield 42-yard line. The twin brother of quarterback Brennan Espy went to the left sideline and easily outraced the Mustang defense to give Marshfield a 31-14 lead with 8:28 left.

Marshfield held on McDonald County's next possession, taking over on downs at its own 28-yard line and used a 13-play drive to run out the clock.

McDonald County forced the Blue Jays to go three and out on Marshfield's first possession of the game.

The Mustangs drove from their own 22-yard line to inside the Blue Jays' 10, but on a fourth and one from the 11, Martin's five-yard quarterback sneak was called back on an illegal procedure penalty.

A second penalty moved the ball back to the 21, where a fourth-down pass fell incomplete.

Martin hit Williams twice for 29 yards and Keegan Driscoll once for nine yards. Teague ran for 17 yards to key the drive.

The teams traded punts on their next possessions before Marshfield uses a 72-yard pass from Brennan Espy to Brooks Espy from its own six-yard line to set up Brennan Espy's eight-yard touchdown pass to Landon Wilson with 9:11 left in the first half.

McDonald County answered by marching 60 yards in 11 plays to take a 7-6 lead on Teague's six-yard touchdown run and Mora's extra point with 3:41 left in the half.

But after recovering a Marshfield fumble inside its own 20, the Mustangs were forced to punt, with Marshfield taking over on the McDonald County 43-yard line with less than a minute to halftime.

On the first play following the punt, Brennan Espy and Wilson connected again, this time for a 43-yard touchdown to give the Blue Jays a 12-7 lead at intermission.

Teague finished with 69 yards on 19 carries, while Teriek had 55 on just three carries to lead the ground game. Martin added 32 yards on the ground and threw for 114 yards on eight of 18 passing. Williams caught six passes for 96 yards.

The Mustangs travel to Logan-Rogersville Friday, Sept. 6. Kickoff is at 7 p.m.