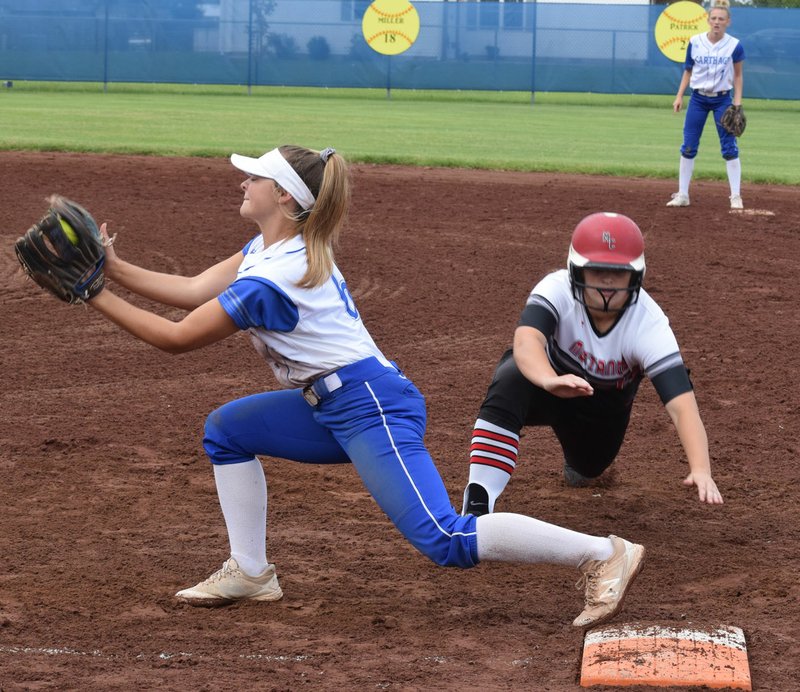 RICK PECK/SPECIAL TO MCDONALD COUNTY PRESS McDonald County's Kaylee Eberley gets forced out at first base during the Lady Mustangs' 5-1 win over Carthage on Aug. 31 at Carthage High School in the 2019 season opener.

Alexa Hopkins scattered seven hits while striking out two to lead the McDonald County High School softball team to a 5-1 win over Carthage on Aug. 31 at Carthage in the opening game of the 2019 season.

"Lex kept the ball down and got a lot of ground balls," said coach Skyler Rawlins. "Our defense played well behind her and made the plays we needed to make."

Both teams scored a run in the first inning.

Rita Santillan led off the game for a walk to get the Lady Mustangs' offense started. With two out, she stole second before freshman catcher Regan Myrick singled and drove in a run in her first high school at-bat.

Carthage tied the game in the bottom half of the inning on a single and a triple.

McDonald County took the lead for good in the third when Kristen Cornell was hit by a pitch, went to third on a double by Whitney Kinser and scored on Myrick's sacrifice fly.

The Lady Mustangs added two runs in the fourth. Madeline McCall was hit by a pitch and Jackie Grider walked before Santillan singled to drive in both runners.

Adasyn Leach's single and Santillan's double, along with a Carthage error, gave McDonald County an insurance run in the seventh.

"Rita, Whitney and Reagan hit the ball hard," Rawlins said. "I was happy with our effort, but we still need to polish up some things to get where we want to be. It was a good opening day."

Santillan finished with two hits, two RBIs and a stolen base to lead McDonald County. Kinser, Myrick, Kaylee Eberley and Leach had one each.

McDonald County hosted East Newton on Sept. 3 before traveling to Marshfield on Sept. 5.