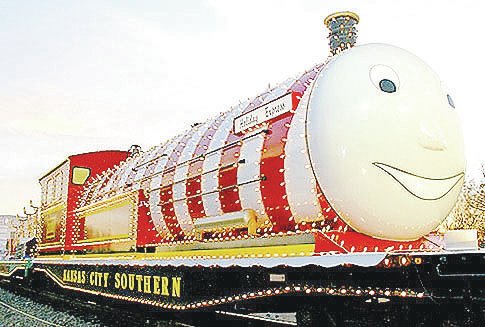 File photo/McDonald County Press The Kansas City Southern Holiday Express recently released its 2019 schedule. The train is expected to pull into Goodman on Saturday, Dec. 14. Arrival will be at 205 West B Avenue, at the intersection of North School Street and West B Avenue, at 4 p.m.

It's not even officially fall yet, but Santa and his elves are already planning a trip to Goodman in December.

The Kansas City Southern Holiday Express recently released its 2019 schedule and Goodman made the list. The train is expected to pull into Goodman on Saturday, Dec. 14. Arrival will be at 4 p.m. at 205 West B Avenue, at the intersection of North School Street and West B Avenue.

Santa previously made an appearance in 2016, and the train drew more than 1,600 visitors to Goodman, city officials reported.

Michael Richmond, the son of Goodman Mayor Greg Richmond, is the driving force in securing the train's appearance. Michael's life-long love of trains compelled him to lobby for the train several years ago. The event in 2016 was so great, he hoped for a successful repeat.

Michael contacted officials earlier this year to see if Goodman would be considered for a visit.

"Michael is an integral part in getting the train coming back," Greg Richmond said. "We are excited about the return."

The Holiday Express to Goodman offers children a look at the train, an opportunity to take photos with Santa, and a chance to enjoy some free fun.

The KCS Holiday Express was built on the tradition of the Santa Train, which ran on a segment of the network bought by KCS in 1997, according to information on trn.trains.com.

In 2000, a group of KCS employees noticed that the Santa Train was the only Christmas some kids had. They realized that there were some children who did not have coats, hats and gloves, so they committed to finding a solution. In 2001, volunteers transformed a retired freight train that would provide cheer while being a catalyst for donations.

In 2018, the train visited 22 communities in eight states on 27 dates. At each stop, visitors board the train, visit with Santa and his elves and tour the inside of three cars of the festive six-car train.

Each event is free and open to the public.

The train has made at least one other stop in the area in recent years. The train visited Anderson in December 2017, drawing crowds and providing a backdrop for Christmas festivities for the entire family.