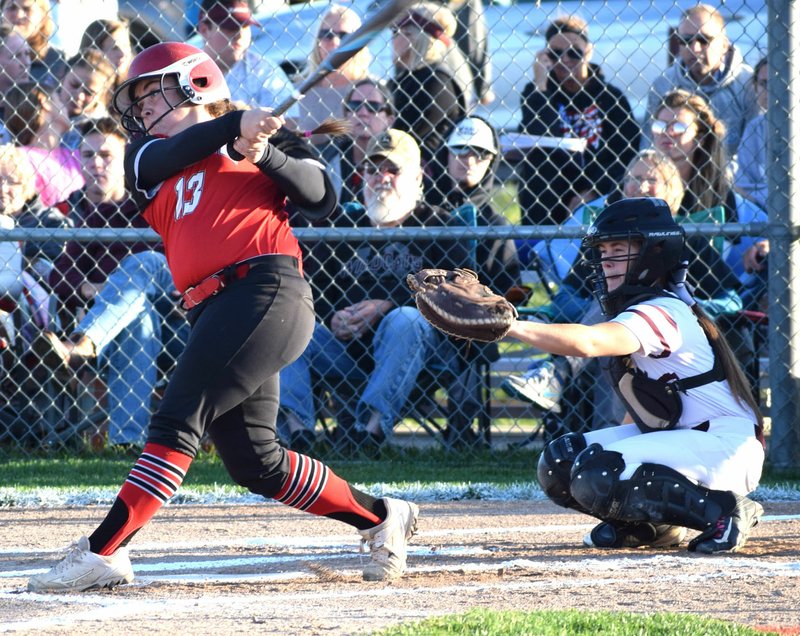 RICK PECK/SPECIAL TO MCDONALD COUNTY PRESS McDonald County's Whitney Kinser watches as the ball she just hit flies over the centerfield fence during the Lady Mustangs' 8-7 loss to Logan-Rogersville on Oct. 23 in the Missouri Class 3 Softball Sectional 3 on Oct. 23 at Logan-Rogersville High School.

Until one swing of the bat by Logan-Rogersville sophomore Jenna Lane in the bottom of the sixth inning, the McDonald County Lady Mustang softball team had led since the top of the first inning in the Missouri Class 3 Softball Sectional 3 on Oct. 23 at Logan-Rogersville High School.

But the diminutive Lane, standing just over 5 feet tall, stroked a 1-0 fastball from McDonald County's Madeline McCall over right-centerfield fence for a grand slam, turning a 5-4 deficit into an 8-5 lead and keyed the Lady Wildcats' win to advance to the state quarterfinals.

Logan-Rogersville gave the Lady Mustangs one of their two regular-season losses, a 3-0 win on Oct. 3 when Miles pitched a no-hitter to lead the Lady Wildcats to a 3-0 win.

But that streak was broken on the first pitch of the game on Rita Santillan's solid single to left field. Kristin Cornell sacrificed and Reagan Myrick flew out to leave Santillan on second base with two outs bringing up Whitney Kinser.

Kinser took a ball before blasting a towering home run, her seventh of the season, over the centerfield fence to give McDonald County a 2-0 lead.

Not satisfied with two runs, the Lady Mustangs added a third run on a single by Alexa Hopkins and McCall's double for a 3-0 lead after a half inning.

McCall shut out the Lady Tigers through the first three innings on two hits, while striking out four before Logan-Rogersville was able to tie the score in the fourth with three runs on two hits, an error, a dropped third strike and a fielder's choice.

But McDonald county answered in the top of the fifth. Hopkins singled with one out for her third hit of the game. She was still at first with two out when Kaylee Eberley hit a line drive over the left-centerfield fence for a two-run home, her first of the year, and a 5-3 McDonald County lead.

Logan-Rogersville cut the lead to 5-4 in the bottom half of the inning on a walk, a hit, a sacrifice and a fielder's choice.

After McDonald County went down in order in the sixth, Logan-Rogersville went ahead on Lane's grand slam in the bottom half of the inning.

In the top of the seventh, Myrick led off with a double and was still there with two out. But after McCall was hit by a pitch, Eberley singled home one run and Jackie Grider doubled in a second before Miles got the final out on a strikeout with the potential tying and winning runs on base.

"We thought we had a good plan at the plate going into the game," Rawlins said. "We had a different approach and we thought we would score some runs. I thought we executed very well at the plate. Anytime you get 12 hits and score seven runs, that should be enough to win a ball game. I will give them credit though -- they squared up some balls and put a lot of pressure on our defense. They earned it. It was a good playoff game."

Eberley and Hopkins finished with three hits each, while Santillan, Myrick, Kinser, McCall, Grider and Adyson Leach had one each to lead the McDonald County offense.

McCall went the distance in the circle, allowing eight runs on eight hits while striking out eight and walking three.

McDonald County finished the season with a 21-3 record.

"We won a district and conference championship and those are two of our goals we have every year," Rawlins said. "It's always nice to reach those, but it would have been nice to get more. I can't say enough about this senior class. These seven girls have won three district titles and three conference championships in their four years. They have left the program in a great spot and set a great example for everyone that follows them."