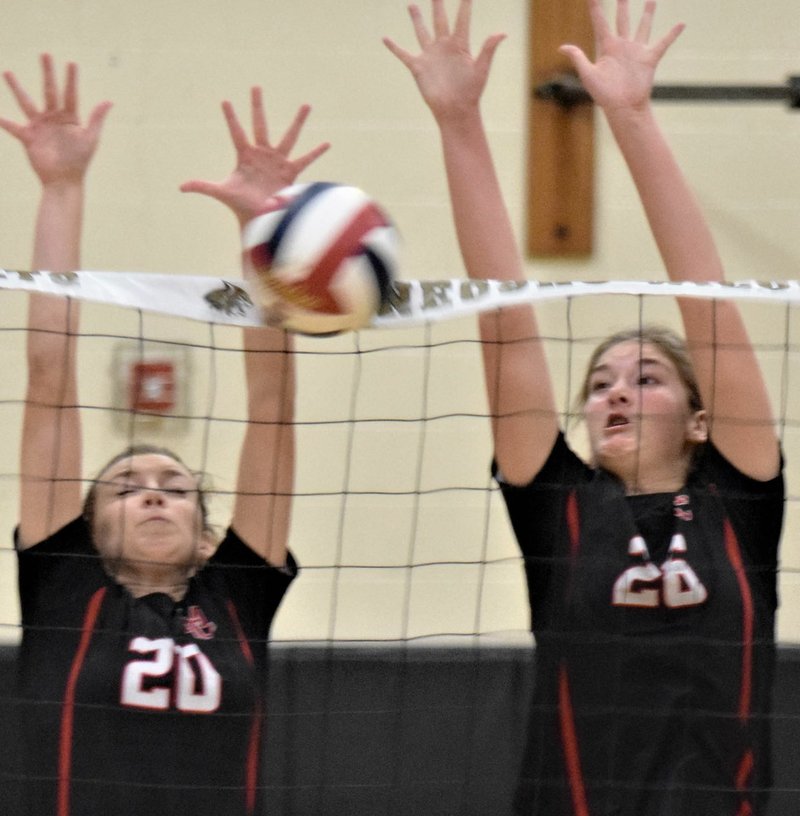 RICK PECK/SPECIAL TO MCDONALD COUNTY PRESS McDonald County's Rylee Bradley (left) and Sydnie Sanny team up for a block during the Lady Mustangs' 25-0, 25-8 loss to Carthage in the Missouri Class 4 District 11 Volleyball Tournament on Oct. 28 at Neosho High School.

The McDonald County High School volleyball team knew that without Kaycee Factor in its opening round of the Missouri Class 4 District 11 Volleyball Tournament, returning serves would be a problem.

Factor, a junior libero, has been the Lady Mustangs key serve returner for the past three years but was out of Monday night's first-round district game at Neosho due to injury.

Just how big a problem returning serves would be was illuminated in the first set when Carthage's Isabelle Howrey jump-served 24 consecutive points to turn a 1-0 lead into a 25-0 win.

Carthage came back in the second set to claim a 25-8 win, which included five more service points by Howrey before she hit a serve into the net.

McDonald County ended its season with a 6-23 record.

In the first game, Catholic jumped out to a 10-3 lead and cruised to the win.

The second game was closer in the beginning. McDonald County trailed 10-6 before closing to 11-10 at one point after scoring four of five points.

But Catholic then scored 13 straight points to pull away for the win.

Adyson Sanny and Katelyn Ferdig had three kills each and Ferdig added seven digs, while Erin Cooper had 10 assists to lead the Lady Mustangs.

Sanny had four kills. Factor had 10 digs, and Cooper had seven assists.