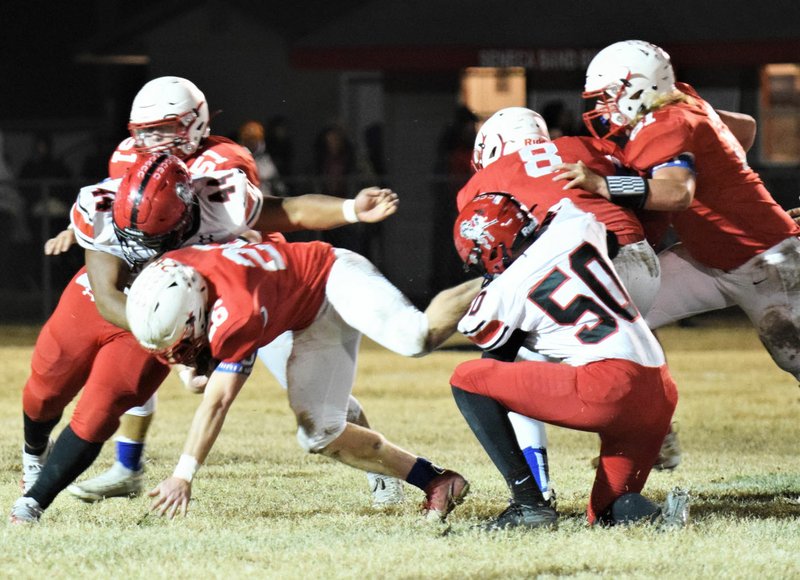 Unfortunately for the McDonald County Mustang football team, the worst of halves was worse than the best of halves.

McDonald County scored a touchdown on each of its second-half possessions only to be stopped by the clock that allowed Seneca to hold on for a 34-27 win on Oct. 25 at Seneca High School.

Seneca scored two touchdowns before McDonald County ran a play, on the way to building a 27-0 lead at halftime before a different McDonald County team came out after intermission to turn a rout into a nail-biter.

"I am proud as heck of our kids for fighting like they did the second half," said coach Kellen Hoover. "They didn't quit when they were so far down. We told them at half we need to erase the score and not look at the scoreboard again. We just need to go make the next play. We came out and had a really good drive to start the second half and that set the momentum at least for our offense. I think our defense jumped on board as well. Both sides of the ball did a great job in the second half. We just have to believe it from the start."

Seneca's one-two running back punch of Trey Wilson and Monty Mailes ran roughshod over the Mustangs in the first half.

Wilson took a hand-off on the second play from scrimmage and went 74 yards for a touchdown with just 20 seconds off the clock. Brayden Thiel kicked the extra point for a 7-0 lead.

Thiel then kicked an onside kick the Indians recovered at the McDonald County 49-yard line.

Instead of two plays, it took Seneca three plays to score -- again on a long run by Wilson. The 200-pound back went untouched straight up the middle for a 45-yard touchdown. Thiel's second PAT gave Seneca 14-0 lead with 10:53 left in the first quarter.

Trailing 14-0 before running a play, McDonald County picked up a first down on a nine-yard run by Junior Teriek before being forced to punt.

The teams then traded punts before Seneca marched from its own 22-yard line to the McDonald County 25 only to be stopped on fourth and two.

McDonald County followed with its best drive of the first half behind the passing combination of quarterback Cole Martin and wide receiver Michael Williams. Martin and Williams connected for three passes for 46 yards before Seneca recovered a Mustang fumble on its own 32-yard line.

The Indians marched 68 yards in six plays, capped by an eight-yard touchdown run by Mailes. The big play on the drive was a 37-yard pass from Lance Stephens to Dayton Long.

McDonald County failed to pick up a first down on its ensuing possession, giving Seneca the ball on its own 26-yard line.

The Indians overcame a holding penalty on second and long when Wilson broke a long run for his third touchdown of the half. The senior's 53-yard scoring run gave Seneca a 27-0 lead at intermission.

McDonald County took the opening kickoff of the second half and marched 75 yards in nine plays, capped by a two-yard touchdown run by Omar Manuel. Jared Mora's PAT cut the Seneca lead to 27-7 with 8:11 left in the third quarter. Martin completed four of five passes for 47 yards, while Jack Teague ran three times for 18 yards to key the drive.

Seneca answered on its ensuing possession when Wilson broke another long run, 49 yards this time, for his fourth touchdown to give Seneca 34-7 lead with 6:36 left in the third.

McDonald County cut the lead to 34-14 on its next possession. Martin completed two passes for 19 yards. Teague ran for 15 yards and Manuel for 14 before Junior Teriek scored from seven yards out with 2:40 left in the quarter.

Seneca then marched from its own 29-yard line to inside the McDonald County 30, but a holding penalty and two sacks, including one for 11 yards on fourth down, gave McDonald County the ball at midfield.

Seneca picked up one first down before being forced to punt on its next possession, giving McDonald County the ball on its own 28-yard line.

On first down, Martin and Williams connected again, this time for 48 yards. Trent Alik then caught a pass good for 28 yards to give McDonald County a first down inside the Seneca five-yard line.

Teague capped the drive on the next play with a three-yard run with 1:54 left in the game to cut the lead to 34-27.

With no time outs left, McDonald County was forced to try an onside kick. The Mustangs managed to recover the kick, but it was ruled McDonald County touched the ball before it went the necessary 10 yards, allowing Seneca to run out the clock.

"We didn't respond very well in the first half," Hoover said. "At halftime, we regrouped and played a good second half."

Teague ran for 63 yards, while Manuel had 35 and Teriek had 29, to lead the ground game. Martin finished by completing 13 of 20 for 217 yards. Williams caught four passes for 94 yards to lead the receivers. Alik added three catches for 52, while Allison had three catches for 37 yards. Manuel caught two balls for nine yards, and Bailey Lewis had one catch for 25 yards.

Wilson finished with 322 yards on the ground and Mailes added 115 as the Indians outgained McDonald County, 503 to 352.

Seneca gained 345 of its total yards in the first half, while McDonald County had 276 of its yards in the second half.