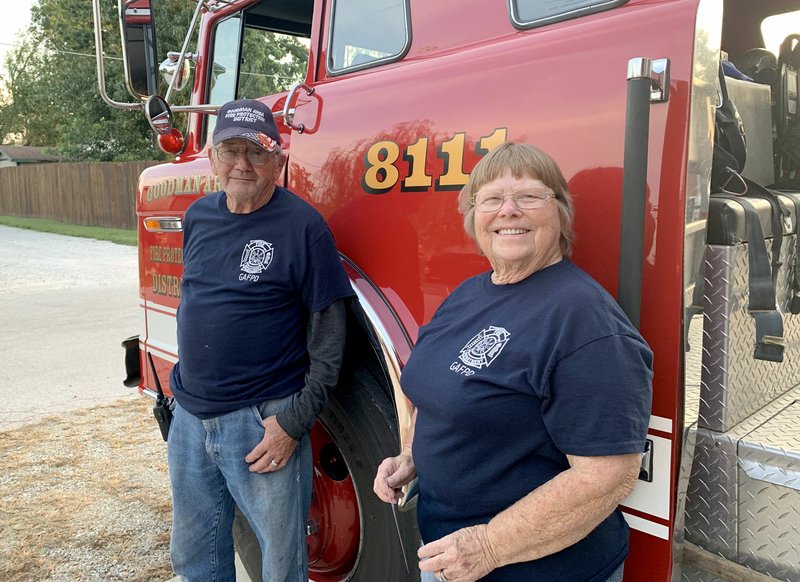 Sally Carroll/McDonald County Press Bud and Dianna Richmond, who have been sweethearts for 56 years, continue to team up to help the Goodman Area Fire Protection District. The two are the longest-serving volunteers, with 41 years and 8 months of service.

Bud and Dianna Richmond of Goodman have helped a heart attack victim, assisted a non-breathing baby and fought many a fire during the past few years.

In a time when it's difficult for smalltown fire departments to recruit and retain volunteers, the Richmonds are a mainstay -- a 41-year and 8-month mainstay!

The couple, ages 78 and 74, respectively, began volunteering decades ago to help their community.

The two are the longest-serving volunteers for the Goodman Area Fire Protection District.

The Richmonds have experienced challenging, painful and rewarding situations. From volunteering as a dispatcher out of their home, to working through the night on fires, the two have remained committed to the cause.

Their two sons both served in the department. Between the four of them, the Richmonds have 200 years of service to the Goodman department.

Now, their granddaughter serves, too.

The call came in: a heart attack victim needed assistance. Dianna's training had just wrapped up two weeks earlier. She didn't have time to think about that, though. She leaped into action, employing the techniques she had just learned.

Then, there was the call that came in from a frantic caller: a baby was not breathing. Dianna responded to that call, too. Once she was on the scene and approached the house, a man came out of the house. In desperation and panic, the man literally threw the baby at her, Dianna recalls.

"The baby hit me so hard," Dianna said, and then the baby began to breathe.

The two have worked extremely hot grass and timber fires. A plane crash with ignited aviation fluid provided a challenge. No one was killed but a man suffered a broken leg.

Along with other volunteers, the Richmonds have undergone training for aviation, diesel, gas and oil fires. The hot, dangerous fires provided invaluable training for firefighters, Bud said.

"They had it under control," with several trucks on hand. "It was a good learning technique."

It's difficult to pack all the highlights of almost 42 years into one recollection. Several situations, however, stick out in their minds.

Volunteers fought a fire for 36 hours, in Beeman Holler, that consumed 800 acres.

Other calls entailed medical help. Bud took the call of a woman in labor. She told him she was going to have the baby and that Bud was going to deliver it. Bud instructed her husband to pack up their things. The ambulance was on its way.

The woman delivered her baby.

The Richmonds have experienced a great deal of highs and lows. One particular incident was difficult for Bud to work.

An accident occurred down by what used to be American Family mobile homes, he said. The car was cut in two. Three children were in the back seat.

"That never left me," Bud said.

The incident was so painful, he almost quit.

Terrifying and tragic situations are difficult to process. That, however, does not deter the Richmonds from jumping into action.

"You leave that at the house," Bud says.

Dianna says work always comes first. "You do what you are trained to do. You shake, you cry and walk the floor later."

The Richmonds have been an integral part from the start. The all-volunteer, low-budget effort often meant that volunteers purchased gas for the fire engines out of their own pockets. Volunteers also bought their own fire equipment suits, Bud says.

Dianna worked as the dispatcher. She had a CB in their house, and when the call came in, she got the word out. When the phone rang incessantly, the Richmonds were alerted that it was a fire call.

The Richmonds had a CB for a long time. Eventually, a radio helped volunteers communicate the calls to fellow responders.

In the early days, volunteers hosted cake and pie sales, fish frys and pancake feeds, all in an effort to raise money. The city had inherited an old 1953 International truck, but volunteers hoped to secure better equipment.

The bank loaned the group the money for a 1966 engine that already had 9,000 miles on it. Volunteers soon realized it was worth about three times what they paid for it, Bud said.

Equipment and methods were a bit primitive in the beginning. The old pool hall in town served as the original fire department.

Over the years, fire and medical calls have run volunteers ragged.

"I've run from the east end to the west end of our district in one night," Bud said.

Working hard with an almost non-existent budget was difficult. Volunteers realized that a fire protection district would provide a form of steady income to fill the coffers.

"We pushed for the fire district," Bud said. "We ran the petition and drove all over. We wanted the community to be served the way it needed to be served."

Voters approved the fire protection district in 2005, establishing a way to build a solid budget.

Several years later, when the position for a fire chief opened up, Bud singlehandedly convinced Keith Estes to head up the department.

Estes said the two have been instrumental in the department's success.

"It is very difficult in this day and time to get volunteers to stay for any length of time or to even volunteer in the first place," Estes said. "The Richmonds have been a great asset to the department over the years."

The community has been extremely appreciative of their volunteer effort, the Richmonds said.

When Bud and Dianna finally decide to hang up their gear, they hope their neighbors know how much they care.

They can relax, knowing they've had an important role in keeping their neighbors safe.