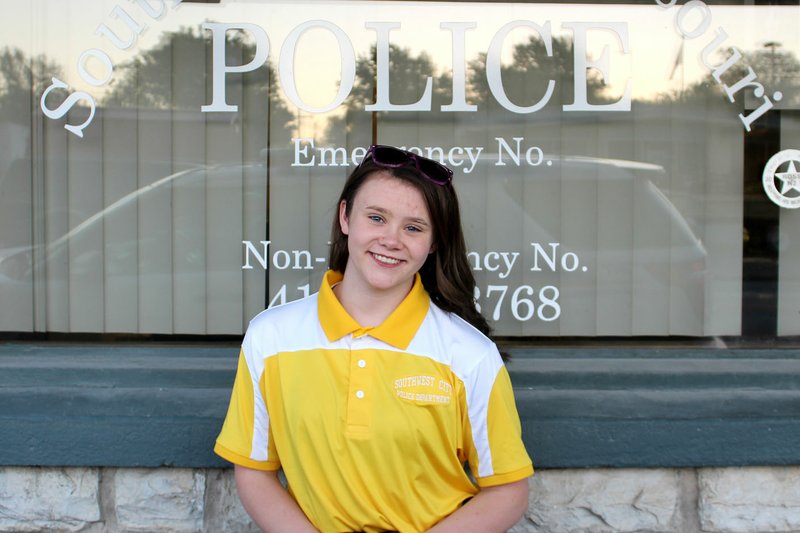 Ember Killion's first year as a police cadet has been nothing short of busy. Since interviewing for the position during her sophomore year of high school, Killion has made a second home of the Southwest City Police Department.

When she's not attending dual-credit college-level classes, serving as president of Skills USA, attending volleyball practices and competitions or working at a local pizzeria, Killion can be found in the passenger seat of a patrol car or catching up on assignments at the police department. She's earned her dispatch and FEMA certifications, as well as completed 10 hour-long online courses through the Police One Academy.

Through the criminal justice program at Crowder College, Killion is scheduled to graduate from high school with an associate's degree and nearly two years of real-life experience in her field of study.

"I'm a hands-on learner," she said. "In the classroom, I get all the knowledge; but when I actually go out and do it, I have a better understanding and make connections to our coursework."

Despite light-hearted teasing from local deputies who call her "quarter cop," Killion has encountered situations that few other students have. She's assisted in serving warrants and searching property, been on several high-speed chases, and, in her first few months, actively tackled a suspect that she later discovered was wanted for murder.

"Every day is different and I love that," she said. "But when it does get too risky, I stay back and observe."

But it's not just the adrenaline rush that keeps Killion coming back, she said she also loves the social aspect and the pursuit of justice.

"I love being part of the community and being present in the public," Killion said. "I like helping people."

Killion must be 21 to receive her POST certification and complete shifts individually. Until then, she plans to pursue a job as a jailer and an internship at a local police department.

"I want to learn all the aspects. I'm very versatile," she said. "If someone needs me for something, I'm gonna do it."