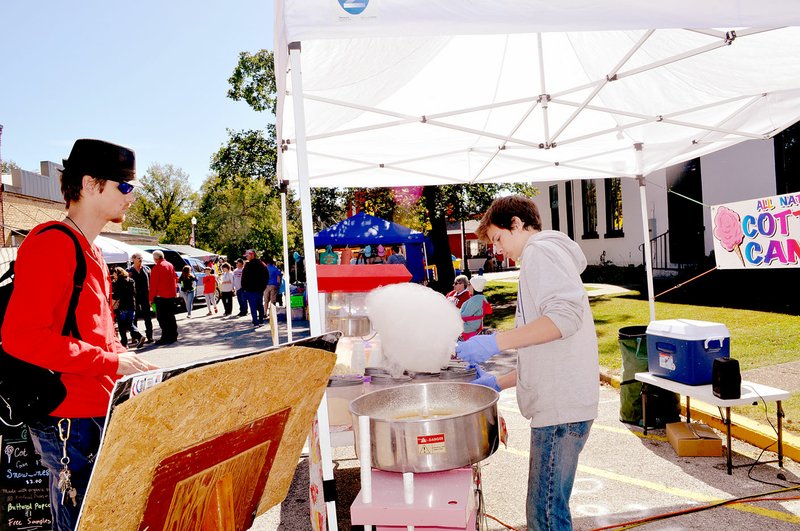 Pam Bastin of Neosho was among the vendors on hand Saturday. Her business is called Rustic Woods, and she makes art from reclaimed wood. She makes light switch covers and outlet covers, charms and other items.

She said she got into the business after helping her daughter rebuild a deck. There were odd pieces of wood leftover, and she did not want to see them go to waste.

"I hate to see anything get thrown away that can get used," she said.

She made her daughter some snowmen and Santas for her craft fair and then decided to make her own crafts. She came up with her own patterns and went to work. In addition to wood pieces, she also makes custom baby flower arrangements that have baby items in them such as socks.

"From what I've seen, it's very well attended," she said of the event. "The people have done a very good job of advertising."

Christy Johnson and Theresa Morse, both of Anderson, were selling handmade wreaths.

"We're both kind of injured, so we're out of work," Johnson said. "We're used to working all the time so we started crafting. When our house was full, we decided we'd have a craft fair. This is our first one. We're having a lot of fun. It turned out to be a pretty day. It's been a great day."

Ashley Rankin of Pineville was selling cement creations and other earthly materials such as clay and plaster.

"I have molds that I've bought and I also make my own," she said. "Crosses, the Susan G. Komen ribbon. If anyone suggests an idea, I will see if I can come up with a mold for it. I've always been crafty and someone just suggested, 'Why don't you cement that?' and it just started all this process."

She said of the festival, "I love it. I've lived here four years, but my fiancé has lived here his whole life. This year was my first time doing Jesse James Days. I love doing something fall-related."

"I think it's been a great day," Marshall said. "I've seen some great vendors out here. A lot of families coming out. Their weather has been great, and they have kettle corn, so kettle corn is perfect."